2014 has seen an enhanced appreciation for women athletes 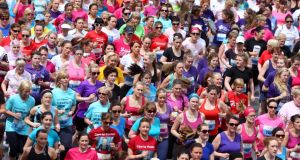 One of the most striking themes to permeate the 2014 PSG Sponsorship Sports Sentiment Index is the greater appreciation and recognition of the sporting achievements of our female athletes and teams. In a week where fantastic acts of bravery, skill and endurance are honoured by The Irish Times and Irish Sports Council at the annual Sportswoman of the Year Awards, it is obviously encouraging to see these endeavours appreciated by a wider section of the general population.

What will take longer to demonstrate, is whether this enhanced appreciation turns into greater participation numbers with more females taking part in organised and competitive sport.

So why this greater appreciation for female sporting achievements in 2014?

Crucially, apart from the greater levels of fitness, performance and skill and the obvious on pitch achievements and emergence of female sporting icons, two other major developments have helped increase public appreciation.

Firstly, female sports are now getting more share of media attention in mainstream media, albeit some would argue that this is coming for a relatively low base. In addition, new digital platforms and the proliferation of social media where there is more scope for trial and engagement have offered another outlet and channel for female sports associations. These associations have become increasingly proactive and imaginative to garner more publicity at a time when sports desks are under increasing pressure.

Secondly, in 2014, major sponsors are now seeing the benefits of sponsoring female sports codes and enhanced commercial investment and greater exposure has helped.

Liberty Insurance’s sponsorship of the camogie All-Ireland was ground breaking when they linked it to their partnership with the All-Ireland hurling. Likewise, AIG became the first sponsor of Dublin GAA to include women’s football and camogie. Both global blue chip brands leveraged their partnerships extensively, with AIG running TV advertisements and outdoor billboard campaigns featuring women’s footballer Sinead Goldrick and camogie player Ali Twomey alongside male counterparts Bernard Brogan and Danny Sutcliffe. This long overdue utilisation of female stars has undoubtedly been a huge step forward and putting the female ambassadors on the same footing is noted and appreciated by those who follow and support female sports.

This trend has continued of late, with other major commercial sponsors turning towards female sports events. Vhi Healthcare recently announced a five year partnership with the Women’s Mini Marathon which attracts 40,000 runners every year to the streets of Dublin.

However, the rise in popularity has not yet permeated into more participation in organised sport, and it is likely to take time for the increased appreciation to filter towards greater numbers taking part.

Similar to previous findings, and in line with Irish Sports Council research, men are far more likely to play organised sport than women. Women aren’t necessarily unhealthier, they are just more likely to take part in leisure exercise such as walking, swimming and going to the gym.

What is extremely encouraging in this research, is that more females are active now than when this same research was conducted in 2011.

In 2011, 35 per cent of females claimed to take no part in any sport or physical activity. Fast forward three years, and this number falls hugely to 23% who claim not to exercise or play any sport. This will be good news to those who have promoted healthier lifestyles and the increase in popularity and accessibility of walking, running and cycling in particular has helped.

The picture is accentuated when you break down the research to compare social class and age groups.

Furthermore, the trend from recent years starkly illustrates the massive drop off in participation and playing organised sport amongst women after the age of 24.

Later in life and for over 55 females, leisure sports and past times such as walking, golf and swimming are unsurprisingly popular with 23% stating they go to the gym or exercise to keep fit with 70% claiming to walk regularly. The older generations are more health conscious than years previous with less inactivity recorded.

Younger women aged 16-24 tend to be more heavily involved in team or individual sports such as ladies football, camogie, athletics and basketball, usually in a school or college environment, but tend to drift away from these sports over time and into their 20s.

In short, half of women playing organised sport cease doing so when reaching their mid-20s.

In summary, individual or team female sporting achievements are now far more recognised than in previous years and females are now healthier and more active. The greater media attention and increased commercial sponsorship will only be beneficial to those promoting female sports participation. However the impact this may have in helping increase participation numbers in organised and competitive sports will take time.

The more profile our brilliant female athletes receive and more commercial sponsorship revenue that is channelled into female sports, the more Katies, Stephanies and Fionnualas will eventually emerge.