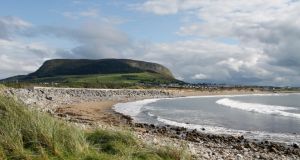 Knocknarea, one of the most famous peaks in the region, is only a ten-minute drive from Sligo town

Sligo’s stunning Surf Coast is right in the heart of the Wild Atlantic Way, and yet, can often be overlooked by those making the journey through the northern reaches of the longest touring route in the world. However, to do so would have you miss the magical wave-crashed stretch of this spectacular coastline, the exhilarating hikes it offers and the rich, living history and warm welcome of its locals. To miss Sligo is to truly miss out.

Most famous as the home of Nobel laureate William Butler Yeats, whose grave can be visited at Drumcliff Cemetery, this glorious part of the Wild Atlantic Way is defined visually by two distinctive elements: mountains and coastline. The Dartry Mountains tower up out of the land near the rugged coast and form a geographical presence that can’t be escaped as you journey from Sligo town out along the coast to the north or the south.

Truskmore is the largest peak in the region and the flat-topped Benbulben - with the toe-like shapes of its sloping sides - are the best known. Knocknarea though is possibly the most famous. A ten-minute drive from Sligo town will bring you to the base of the 327m Knocknarea climb, which can be undertaken from several different angles.

It can be tackled from either the Strandhill or Knocknarea sides, allowing 90 minutes to two hours for the hike itself, up and down. At the Knocknarea side, walkers stop off at Martina Cullen’s crêpe shop for some pre-hike fuel before setting out upwards to the flat peak, where you’ll find the tomb of Queen Maeve. Cullen lives in the shadow of Knocknarea, with her home located in the field just behind her crêpe shop, giving her an enviably short commute to work and an even more desirable view out over the mountain. It's a spectacular view that draws locals and visitors alike who want to experience the very sense of what the Wild Atlantic Way has to offer.

The cairn atop Knocknarea is believed to be 5,000 years old and covered in limestone debris from years of erosion. Having made your way to the top, the views out over the surrounding landscape are fantastic, affording views across the vast landscapes and towards Coney Island, the largest on the Surf Coast.

When you venture into the Sligo landscape it’s the people that you meet that make the hike special; locals regularly make the trek up Knocknarea – both young and old – and are more than happy to stop and chat. We hiked across the mountain with Dr Fiona Gallagher, a local historian, who is also a member of the local Mountain Rescue team, and full of information about the landscape, history and popular culture of the region; a chat which we continued that evening in the Shoot the Crows pub in Sligo town, with her German husband – who relocated from Hamburg.

It's the mountains that drew Gallagher and her husband together initially as they met on a hike here a number of years ago. Together they have hiked in exotic locations around the world but are securely tied to this part of the Wild Atlantic Way. It's very much their place, they say, and nothing would tear them away from Yeats Country for long. It’s a feeling that seems to permeate the county; a sense that its people are bound to the area, but also that they love to sing its praises.

When you come down the other side of Knocknarea, via a wooden boardwalk that guides the way and elevates hikers off the rougher lands of the mountain, Gallagher also offered to show us Coney Island. Located just a couple of kilometres from the mainland, and only 400 acres in size, the island is owned by five families, and has a population of ten. It’s remoteness personified and wildly beautiful.

Access to the island is by boat to its small harbour, but Fiona was adamant on showing us a more adventurous way to reach it, which is to take advantage of low tide, when the island is connected by beach to the mainland. Fourteen pillars were constructed on the beach by the Harbour Board in the 1830s that guide vehicles across at the correct point, where they won’t sink in the sand, provided you drive on the left of the pillars when facing the island from the mainland and turn right just before the last pillar to connect with the road.

Scorching across the beach towards Coney, with water lapping up on either side of the car and across the windscreen was more akin to a hovercraft experience than driving. Once across on Coney you find a beach and the aforementioned harbour, as well as one pub, Michael J Ward’s – only open at weekends. Once on the island, you can visit the fairie ring or the star-shaped forts, or swim at Carty’s Strand, but like most of Ireland’s islands it is the remoteness, and the ability to avoid any crowds, that are the real draws on Coney and a defining characteristic of the Wild Atlantic Way experience.

That experience continues back on the mainland where driving the Surf Coast can be an exhilarating event. Sligo's Gleniff Horseshoe route, equally suitable to walk or drive, is a wonderful mountain road destination.

The best place to start is in the town of Grange, starting at Ballintrillick with its dramatic views up to the Dartry Mountains. They loom high up above the road like a green velvet cloak, punctuated by streams, often shrouded in mist, splattered with black mounds of bog, with wooded areas hugging the roadside; the word beautiful doesn’t quite describe their majesty.

The star attraction of the drive is Diarmuid and Grainne’s Cave. The pair were mythical lovers according to Irish folklore, who were chased for many years by Diarmuid’s best friend, the hunter-warrior, Chief Fionn MacCool, who also desired Grainne – known as the most beautiful woman in Ireland – as his wife. The cave is known as the last resting place of Diarmuid, who died there after being attacked by a wild boar.

It’s the highest cave in Ireland, and a sight that is totally visible from the road, but, due to its very steep incline, one that is recommended to enjoy from a distance.

Soak up the natural minerals of the Wild Atlantic Way

Sligo is a dream for lovers of the outdoors, but we all need pampering, and after a day hiking, in the changeable Irish weather, the Voya Seaweed Baths are the perfect place to unwind.

A unique experience on the Wild Atlantic Way, the baths were established by another local, the former Australia-based professional triathlete Neil Walton. When Walton’s time as a pro-sportsman came to an end "Down Under" he returned to his roots in Sligo and focused his sporting abilities on open-water swimming.

His training, swimming in the bay in front of his house every morning, all-year round, led Neil to look for new and better ways to aid his recovery and performance. That, combined with a background in sports science, brought him to the health benefits of seaweed: absorption of iodine to raise the alkalinity of the body and raising the number of negative ions in the body for overall mental and physical health benefits.

An hour soaking in a tub of seaweed, followed by a full-body massage, leaves you revived and fresh, and you don’t need to be a sports fanatic to enjoy it - it’s for everyone. The baths are also used to help alleviate stress, relieve skin conditions and are beneficial in the treatment of muscle aches and joint stiffness. If you’re looking to escape the travails of modern life, this is the place to do it. The combination of treatments like Voya, the natural environment of the Wild Atlantic Way and the rich calm atmosphere it provides are priceless.

Getting out on the water of the Surf Coast

But it's not all relaxation. The Surf Coast, particularly the stretch that includes Bundoran and nearby Mullaghmore Head, is renowned for drawing surfers (and those who simply love to observe the battle between warrior and wave). People come from across the globe to see the fabled Prowlers wave in action as well as for international events. The red-gold beach of Strandhill, too, has become a mecca for those who simply want to feel the reinvigoration of the saltwater spray.

Easkey and Enniscrone are world-famous surf spots and have a number of outlets that cater for the hiring of boards and wetsuits, as well as offering lessons, including Offshore Surf School (Easkey) and North West Surf School (Enniscrone).

This part of the Wild Atlantic Way is a destination that offers a fantastic blend of outdoor activities, welcoming locals and off-the-beaten-track sights, and through immersing onself in all three, visitors truly get to experience the rugged essence of what the Wild Atlantic Way really is.