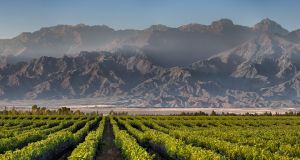 The name Trivento translates from Spanish as three winds.

Since its launch in Ireland last year, Trivento Reserve Malbec has been quickly discovered by Irish wine aficionados, and taken to heart.

Trivento’s success here follows that in the UK and Europe, where it is already well established as the number one Malbec in both markets.*

For Irish consumers looking to discover more about this wine – a premium product at a very competitive price point – it’s worth going back to its source. That includes both the vineyards that produce it and the three regional winds that tend it.

The name Trivento translates from Spanish as three winds. It refers to the Polar, Zonda and Sudestada winds that blow across the sunny and arid land of Mendoza, Argentina’s famous western wine growing region.

Each wind plays a part in wine production here. The Polar wind is a sign of winter - time for pruning. Spring brings the Zonda, whose warm gusts nurture shoots and buds that require tending and fixing to trellises. The Sudestada of summer allows the grapes to ripen.

It’s a triple act that has been going on since Trivento was founded in 1996 by Viña Concha Toro, Latin America’s most famous winery. Trivento quickly built a reputation for producing beautiful wines, distinguished for preserving the character of the Mendozan terroir.

Its global success is quite remarkable given this short trajectory, but Trivento quickly established itself as the number one Argentine wine brand in Europe in 2013, and Trivento wine maker, German Di Cesare, has also been recognised as best Argentinean wine producer. That it should emulate that performance in Ireland will be no surprise to wine lovers.

Trivento’s Reserve Malbec, vintage 2018, is widely available here now and has its origins in the Uco and Luján de Cuyo Valleys of Mendoza Province, which is one of the country’s most visually stunning and important wine growing regions, accounting for nearly two thirds of the country’s wine production.

Malbec is by far the best known Argentinean red grape variety. Originally native to south west France, it found a natural home in the high altitude vineyards of Mendoza. Located in the eastern foothills of the Andes, in the shadow of Mount Aconcagua, vineyards here are planted at some of the highest altitudes in the world, up to 1100 metres above sea level at some points, in rich alluvial soil.

Being a southern hemisphere wine, Trivento Malbec is harvested in the third week of March each year, with 25 per cent of it aged in handpicked French oak barrels for six months before being aged for an additional five months in bottles prior to release.

It is this process that imbues it with its signature soft, full bodied fruitiness. Trivento Malbec Vintage 2018 has brilliant, intensely red hues with violet and bluish tinges. It has aromas and flavours that commonly balance cherries, raspberries, red plums and blackcurrants with notes of mocha, vanilla and coconut, imparted from the oak.

On the palate it is well balanced, exhibiting sweet tannins and a velvety finish – a huge part of Malbec’s appeal is that it is usually low in acidity and high in tannins.

Trivento Reserve Malbec is a bold wine that works best with bold foods. You’ll often find it paired with steak or red meat of all kinds, including in rich lasagnes, stews and casseroles. It works beautifully with charcuterie too, such as cured beef or flavourful terrines; with strong cheeses, such as Spanish manchego and with vegan tapas style treats such as mushroom and thyme on garlic bread.

The fact that it pairs equally well with comfort-giving winter dishes as it does with the barbecue steaks of summer makes it the perfect wine for all seasons. It’s in part why Reserve Malbec has succeeded in more than 100 markets worldwide.

The award-winning wine maker has been recognised as Best Argentinean Wine Producer for its contributions to the country’s winemaking industry, its quality standards and its influence on variety and value. Its winery is a popular visitor destination for wine lovers but, thanks to its success worldwide, you only have to travel to your local stockist to enjoy it.

Trivento Malbec has been consistently verified by experts as offering great quality and value. It has won accolades from some of the world’s best known wine publications, including numerous Best Buy and Top Value awards.

This reflects the fact that it’s a wine whose top quality belies its consumer-friendly price point. It’s also a very safe buy in that Trivento Reserve Malbec is a very consistent wine. Irish wine lovers have quickly come to recognise it as a wine they can trust.

People may already know the brand from its work as a sponsor on the Discovery Channel.

The good news for wine lovers is that there is more to discover from Trivento too. The winery has recently launched its first ever exported White Malbec on the Irish market before Christmas, with Tesco Ireland being the first retailer in the world to offer the White Malbec.

A White Malbec is a white wine created from a red grape. This resulting fresh and fruity white wine, with its delicate pink hues, is a perfect example of the kind of craft and innovation that has enabled Trivento build up such a strong following both in Ireland and right across Europe.