The Story of Home series, in association with Ulster Bank, travels to Skerries in Co Dublin to see how light has transformed the work and home of award-winning designer Shane Holland 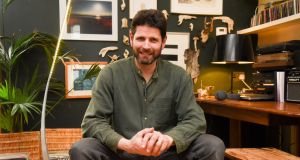 Shane Holland is a natural collector. It’s a rare trip, he says, that doesn’t involve him bringing castoff pieces of metal and discarded glass bottles home to work on. Pairing them with the high-end materials that are a signature of his work he constructs lighting and sculptural pieces that are both extravagant and elegant.

One of the walls of his north county Dublin home are hung with animal skulls and bones alongside pieces of drift wood and photographs – souvenirs from his many sea kayaking trips to the islands around Ireland. His personality and that of his family dominate the large airy spaces that make up this modern home and the large extension that now defines the house is stuffed with colour and texture, bringing the story of this artistic family to life.

The previous owner of the house was a dentist who had added a 1980s-style flat-roof extension to facilitate his combination of family life and business in the same building. Returning the property to full family use was the main challenge, but, while they have kept the footprint of the house intact, the interior has been totally reinvented.

In the ten years since they moved in, Holland and his wife Carol, an interior architect, have worked to create a series of living spaces that celebrate light and shade while creating drama and comfort for their three children and themselves. A huge skylight, long slot windows and wonderful timber and floor-to-ceiling glass doors direct light from all directions in daylight hours, allowing Shane Holland’s lighting design command the space at night.

“Light is a designer’s friend, it gives great scope for experimentation and we tried to use that concept both day and night. Light is such an important part of life – it affects your mood and your health, it’s a crucial part of a home,” he says.

There’s great originality in Holland’s work that strives to fuse an industrial edge with an element of nature. Trained as an industrial designer, he’s excited by the honesty of design in pieces that must also serve a very practical function.

“If I see a disk brake from a car and I see a log of wood I try and find a way to marry these two materials that keeps the nature of the wood intact but also allows the industrial nature of the metal to come through. But then the whole thing has to function in a really simple way also. It has to work. That’s the fun bit for me.”

This same sense of practicality and fun forged the family’s main living space. By removing walls, installing skylights and building partitions, they created a trio of spaces that make up one large dynamic room while also performing three separate functions – cooking, dining and relaxing.

At the centre of everything is a great double-sided stove that roots the entire space and allows this cast-iron and glass structure to demand your attention.

“The stove was supposed to be built into a wall and everything but the main body should have been hidden. I had even gone as far as building a metal cover to hide the fins and flue but once it was in place we really saw the beauty of the thing and wanted to present it in its natural state and not conceal it in any way. We wanted to appreciate it like a piece of cast-iron sculpture.”

As we talk, this “trial-and-error” approach becomes a common motif in his most successful creations and he reveals a strong sense of austerity and appreciation for recycling and that drives his creativity.

The Etang lamp, a signature piece that was recently selected by Guinness when that company transformed Dublin’s famous Gravity bar into a dream apartment for an international competition, is a case in point.

“The Etang lamp is based on the shape of a waiting room ticket. The start of one ticket is the end of the other and so there is no waste. The production process was incredibly efficient. We were able to take a single piece of metal and cut it into each piece, vastly reducing waste.”

Each strip of metal is then rolled into the shape of an E to encircle the bulb but also leave it on show, the curves of the metal suddenly becoming soft and fluid in their design. It’s been hugely popular and people love to hear the story of its design, he says.

Similarly, his Ruray lamp, its form and shape taking its inspiration from a mythical wave off the coast of Co Down, has found fans with its back-story. “I was in Northern Ireland researching a sculpture and heard the story of Tonn Ruraigh, an imaginary wave just beyond the horizon that could be heard but never seen.

“I set about imagining what it might look like and by the time we had released the lamp at London Design Week some years ago its story had already taken off online. Orders were coming in from all over the world before we even had the packaging finished.”

It’s a beautiful piece that uses discreet LED lights along its edge to illuminate an area but which also give the piece a sculptural feel. Not surprisingly, given its storytelling provenance, it really comes to life when paired with a book and it’s easy to imagine readers seeing it as a perfect reading companion. Holland has since allowed the design to evolve into a large stand-up version which up-ends the wave allowing it to light entire spaces.

“I want to get the most from the materials I work with but also to push materials to the limit and make them work really hard for the owner,” he says. “A larger version of the Ruray just made sense but it wasn’t really planned in advance.”

One of his more recent success stories was also a bit of a mistake, he says. He created the Wilde Cage for the Oscar Wilde Centre and in designing it he says he went against his better judgment.

“I always want to protect the bulb and add a shade of some sort but in this case we ended up using a filament bulb that didn’t need a shade.

“But in the end we added a wire-frame shade that didn’t actually need to be there. Somehow this wire frame allowed it to command the space and have a presence and have an architectural feel that was wholly unexpected. It was a very simple intervention that brought it to another place,” he says.

“Metal is so sophisticated,” he continues. “Nickle, brass, steel – we can create so much with it and people really should use it more in their homes. And colour too. People are afraid of using too much colour but it can create great contrasts.

“The trick is not to overdo it. Good design is the ability to take out the stuff that doesn’t need to be there. If we’re disciplined we can do that in our homes and create the kind of spaces we really want to live in. We can create our very own personal version of home.”

The Story of Home, in association with Ulster Bank, is a six-part weekly print, video and online editorial series that explores the idea of home through the eyes and work of six inspiring Irish designers. We are all writing our own Story of Home and, to help inspire you, we’ve turned to a group of people who have made design for the home the core of what they do.

“At Ulster Bank, we want to be a part of the journey you and your family take in making your ‘now’ home your ‘forever’ home,” says Ulster Bank mobile mortgage manager Susan Doyle.

“You design the plans and we assist you in making it happen. As Shane Holland explains, ‘the trick is not to overdo it’ and I love this idea. We want to keep things as simple and as hassle free as you do.” One way Ulster Bank achieves this is through their flexible opening hours.

“We have branches open late on Thursdays and Saturday morning.
Our mobile mortgage managers can also meet you at a time and place
that is most convenient for you and your family.

“We’ll also ensure you always get the best rates, regardless of whether you are anewcustomer or an existing one.

“Building your story of home has never been simpler.”