In the fifth instalment of the Ulster Bank Story of Home series we meet Kevin O’Neill, who brought a barely-standing barn back from the brink

Kevin O’Neill: 'Home is important to me, because it’s not all about the building but what you put into it and the atmosphere you’re trying to create’. 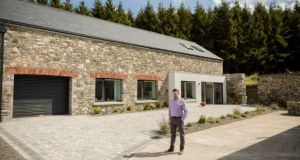 Kevin O’Neill: 'Home is important to me, because it’s not all about the building but what you put into it and the atmosphere you’re trying to create’. Photographs: Declan Devlin

New York City had a big impact on the imagination of architectural technologist Kevin O’Neill, so when it came to drawing up plans for his own loft-style barn conversion, details of the Big Apple can be seen peppered throughout this sleek home in County Cavan.

O’Neill works in O’Mahony Pike architects in Dublin, where he spends most of his days making other people’s dream homes become a reality. But when it came to designing and building his own property, just outside the small village of Ballyjamesduff, he wondered what he had gotten himself into.

"It was a ruin, and we started the project in January, dragging everything out in rain and snow. It’s an old building so you never know what you’re going to find inside. We found a gable wall that we didn’t think we’d have to knock but we did. The back and side walls are completely original and everything at the front is from what we reclaimed here."

The house sits on two acres of land, which is shared with his brother’s family home, situated across from his own property and his parent’s bungalow to the side.

"We’re lucky in that we’re a close-knit family,” he laughs. “We all get on really well and in designing this house I wanted it to be a place that the kids, my nieces and nephews, could run in and out of."

New York architecture can be seen regularly throughout the house, reflective of O’Neill’s many trips to the city. “I like big open spaces but you can see it in the brick work too. In the loft is a games area, where I keep my guitars, Fusbal, and PlayStation, but it also doubles as an office space,” he says.

As a keen cook – Jambalaya is a speciality – the kitchen was designed to allow him toil over the cooker, while socialising with his friends and family.

“I put a lot of thought and effort into it and how I like to use the kitchen. I didn’t want to be excluded from the craic, while doing the cooking, so that’s why I made this room open plan.”

It’s hard to believe this house is a conversion project, and that a year and a half ago, the building was in ruins. Why take on something so arduous?

"I was looking out of the shed one day, where the double-height window is now and I saw this room in it. It evolved from that really. It was part of the bigger house across the road which belongs to my brother, and the stone work is reflective of that house,” he says.

“My brother is a quantity surveyor and my dad is a builder, so they were very involved in the building of it. All of the finishing touches are mine, I drew up the kitchen and my brother-in-law made it for me. I made the dining table and cut out both the beds.”

Community is vital to O’Neill and it’s part of his reason for not living in Dublin, close to his work.

“I lived in London for a couple of years but you can get lost in a big city like that. Ballyjamesduff is a small, close-knit community, everyone knows everyone else. That’s quite important to me,” he says.

Given his job and the sense of satisfaction from his own home conversion, he says he’d love the chance to renovate again– for someone else this time.

“It’s just something I like doing, creating a place somebody wants to live in. My work is about creating homes for other people... I’m proud of the buildings I’ve worked on, as you invest so much time and effort into them.”

While he is proud of the many projects he has worked on through the years, his own stands out.

“We were working till all hours at night and it was a family project, so for that reason I’m very proud. I think my Dad is proud of me for doing it – he’d never say it but he shows everyone around when they call up here,” he laughs.

“I see this as my home for life, I can’t see myself moving. Family is important to me, to have them close by, and I have created a space where the kids will call over. They go straight for the sweet jars, watch the telly. Basically it’s the cool house they want to be in, and so do I.”