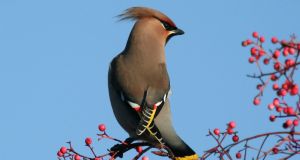 Waxwings breed in the Taiga forest, around Russia and Scandinavia. Around September they switch from eating flies to eating berries and migrate south and arrive here. Photograph: Dick Coombes

Ireland’s vibrant bird populations fill our forests, fields, towns and shorelines with a hive of activity. Each year, thousands of birds migrate here to join the year-round native population. Many of them spend enough time to take up a residency, some are just passing through while others arrive by mistake, taking a wrong turn along international migration routes.

Photographer Dick Coombes (pictured) has worked with Birdwatch Ireland for 20 years, monitoring bird populations and their activities in an effort to better understand them, their journey and to work to conserve their natural habitats.

Birdwatch Ireland has members all across Ireland, each working to produce representative samples of their area each year.

This is a vital element of how Birdwatch Ireland can compare annual populations and general trends among the birds of Ireland. Here, Coombes chooses just five images from his collection to illustrate the changing nature of the birds who call Ireland home.

“These are very common in Ireland. In fact, for most, they’re the first point of contact in birdwatching. Anyone over the age of 40 or 50 will remember these guys pecking at their milk bottles in the morning. Apparently it was in Southampton where blue tits first discovered they could hack their way through the foil and get at the cream. They’re quite a cheeky little bird.”

“They have a really wonderful character. And I suppose it’s because of their vibrant colouring that they are a gateway into birdwatching in Ireland. They’re as colourful as any other bird anywhere. This one was taken in my back garden in Delgany, Co Wicklow. They’re absolutely everywhere, and, again, it’s their character that makes them so special. Humans don’t faze them at all.”

“This is a variety of wader. They’re extremely rare in Ireland, usually ending up here by accident. Their breeding ground is in the extreme north of Canada, and in the autumn they travel directly down to Argentina. So they’re an extremely long-distance migrant. Younger ones will get lost sometimes and end up here instead of Argentina, so you can imagine how rare it is that they actually make it this far, even though they’re very strong birds.”

“September is your best chance of seeing them. I found this one on Ballycotton beach in east Cork, but Wexford is the best place to find them, around marshy areas near the sea. We had less than 10 reported sightings last year. They have a really beautiful plumage when you get to see them up close, but that’s a really rare opportunity.”

“This is another long-distance migrant. These guys nest in the south Atlantic ocean, in Tristan da Cunha. They’re the most isolated inhabited islands in the world, and there’s about five million great shearwater nests there. They’re a sea bird, and we have a variety of different shearwaters in Ireland, like the manx shearwater. But this is the biggest, which is why we call it the great shearwater. They have no problem travelling thousands of miles. To get here, the southwest gale blows them over as they travel to Newfoundland in April. They follow the warm temperatures in August and September.”

“They’re absolute masters of using the ocean, to the extent that they’ve become symbolic of oceanic wanderers. They’ve been known to glide over the ocean for one-and-a-half miles without flapping their wings. They’re tricky enough to find, as it’s in the mist or in stormy conditions that you’re most likely to come across them. You’ll know them by the distinct little speck of white on their tail.”

“It’s remarkable that we can now say the great spotted woodpecker is a new addition to Ireland. If you look in birdwatching books from not that long ago, they’ll tell you there are no woodpeckers in Ireland. And it’s wonderful to know that they are doing well here, and they’re being a useful bird for other birds and animals, who live in or lay eggs in the holes they peck into trees. They’re such a unique bird. Their arrival around 2004 and 2005 coincided with a large increase that was occuring in the UK. This triggered some of those birds to pioneer new teritories across the Irish sea. This one was in the depths of Wicklow, near Tinahely.”

“I always felt a little hard done by, not having them here. So we’re really lucky now that their numbers have increased. By nature they’re quite a slow bird. It’s lovely to hear them. That sound is their way of proclaiming a territory. It’s like a weapon they use to fend off an enemy.”

“They’re called this because of the waxy texture on a small group of feathers on the wing. They’re another beautiful bird, coming down to Ireland from Scandinavia. They breed in the Taiga forest, around Russia and Scandinavia, in the summertime. What’s rather fascinating about these is that they catch flies for food. But around September they switch from eating flies to eating berries and migrate south. They’re very tame birds, very approachable. They’ve no fear of humans, probably because they hardly ever see them until they’re down this way.”

“We’ve had an increase in waxwings recently, due to a bad berry yield up north in Scandinavia. So that’s why they come south, and you’ll find them from Northern Ireland all the way down to south Wicklow, as well as in Cork and Kerry. They gravitate towards rowan trees, and it’s not unusual to see flocks of over 100 in search of berries. I saw a flock of maybe 150 in Lucan recently."

Birdwatch Ireland is the largest independent conservation organisation in Ireland. As a registered charity, their goal is to protect and preserve wild birds and their habitats.

Established in 1968, there are more than 15,000 members involved in conservation work, with a growing network of 30 local branches. They manage nature reserves to protect natural habitats and wildlife there and work to conserve the biodiversity of Ireland.

If you wish to get involved or take part in their many national surveys and report sightings, a comprehensive list of surveys and information is available from their website birdwatchireland.ie. The Garden Bird Survey, for example, has 1,500 birdwatchers involved and goes a long way in helping Birdwatch to analyse and understand species.

SSE AIRTRICITY: TOGETHER WE CAN POWER A GREENER IRELAND

Join SSE Airtricity and get 10 per cent off electricity and gas, plus up to €180 credit. See www.sseairtricity.com/ie/home/products/electricity-and-gas/ for more information.