Looking for work experience and a qualification up to postgraduate level?

Whether you’re a school leaver considering your future, or a worker looking to upskill, the country’s apprenticeship programme should be your first port of call 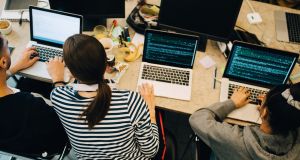 Maria Walshe, communications manager, Solas: “The story is changing; the perception of apprenticeships is changing. There are currently 16,000 apprenticeships across the country and the number is growing steadily.” Photograph: Getty Images

Want to get into high finance? Looking for a career in high tech? For an increasing number of high flyers, an apprenticeship is the way to go.

If that surprises you it’s because Ireland has traditionally had a bifurcated education system; if you weren’t going into the workforce straight from school you either went the apprenticeship route (and learned a trade), or you went to college and got an academic qualification.

Doing one seemed to preclude the other.

Not anymore. Today, whether you’re a school leaver considering your future, or a worker looking to upskill, the country’s apprenticeship programme is your first port of call.

Not alone does an apprenticeship give you invaluable on-the-job experience and top notch training, but an academic qualification right up to postgraduate level. That’s some CV.

“There have been major changes in apprenticeships since 2016, with a huge number of new ones coming on board,” says Maria Walshe, communications manager with Solas, which looks after further education and training in Ireland.

There are currently 52 different types of apprenticeships at a range of different levels, from QQI Level 6 to Masters Level QQI Level 9.

There is even an apprenticeship in development at QQI10, PhD-doctorate level.

Many are delivered by Education and Training Boards, Institutes of Technology and universities such as TU Dublin and University of Limerick. The programme has the backing of some of the country’s top employers too.

In sectors such as construction and the motor industry, apprenticeships have always been the norm. Over the past three years Solas has introduced a raft of new sectors to the apprenticeship system. These include white-collar sectors such as financial services, as well as information & communications technology (ICT), logistics, property, biopharmaceuticals and hospitality & food.

New apprenticeships open a new door into all of these industries, on top of existing routes such as third-level courses, further education and training, and post leaving cert courses.

Having a suite of entry points is important, because people learn in different ways, and do so in different circumstances – not everyone can afford to study full-time, for example.

“It’s about looking at how people learn, and having a full suite of options available so that they can get the best way for them to learn,” says Walshe.

While we often associate them with school leavers, the new apprenticeships can be an invaluable option for someone already working in a sector, to upskill, while staying in the workforce.

All apprenticeships start with an employer. If you’ve an interest in a particular sector, your local Education and Training Board can help you find an employer to work with. Currently, there are more than 6000 apprentice employers, including some of the best known names in the country, such as ESB.

The number of employers getting involved has increased, “including many who had never looked at the apprenticeship option before,” says Walshe.

“The story is changing; the perception of apprenticeships is changing. It’s an option that is much more a part of the narrative in the run up to the Leaving Cert than it was before. There are currently 16,000 apprentices across the country and the number is growing steadily.”

With good reason. Employers get good people with a unique blend of applied skills and academic training. Apprentices get to earn while they learn.

All statutory apprentices are paid, with rates varying by industry. Accounting technicians can get €19,000 for example. A Level 8, degree level apprentice in international financial services can get €32,000.

“It’s a win/win for both the apprentice and the employer,” says Walshe.

In 2017 Alina Calistru moved to Ireland from Romania with her husband and 18-month-old daughter.

She already had a degree in economics and was working as a junior frontend web developer in Romania.

However, when she arrived here she found that while she knew the field, she didn’t know enough to get hired.

It was then she came across the FIT (Fastrack to Technology) apprenticeships in ICT.

“Finding out about FIT was the best ever. It allowed me to go back to school and also to get my hands dirty with code, to see what a real work life looks like as a programmer.”

After six months of five-days-a-week classroom-based training in Celbridge, she went to work with professional services firm EY in Dublin city centre in June. She will spend a year doing two class days a week and three EY days.

Starting was “scary” she says. “I was afraid it would be a question of ‘here’s the river, jump in and swim’ because these are busy people, but everyone was so nice. They sat me down and said what kind of work would best suit my goals. Because it’s a big company with a lot of projects going on, they can do that.”

The apprenticeship is hard work. Alina gets up at 4am to study for two hours before class. “What you do in class isn’t enough, you have to be keen.”

What has made it possible for her is the ability to earn money while studying. “It’s not a huge amount but it’s enough to survive while you are learning.”

Her goal is to finish her apprenticeship and get a job. “I will work as hard as I can to continue with EY. They are in business, I come from economics. It’s the best place I could be,” she says.

If there is no vacancy at EY, the skills she has learned during her apprenticeship should make her a valuable commodity in the labour market thanks to experience she would not have been able to get without it.

“You need two years’ experience to get a job as a frontend developer, where else could I have got that?” she asks. “When you have a big gap like that in your career, one that you can’t jump over, the apprenticeship feels like a flying carpet you can get on to.”

Kevin Casey is a second-year apprentice in logistics, currently working with DSV Global Transport and Logistics. Now 25, this is not the road the Kildare native thought he would travel.

When he left school he studied music, but by third year he began wondering where a Level 8 degree in song-writing was going to lead him.

When his brother mentioned a job with DSV, he applied and got it. Once in, he decided he needed to solidify his career choice, applying to study for a Level 8 degree in supply chain management by night through DIT.

“The organiser got back to me and asked if I’d consider doing a Level 6 apprenticeship which would involve doing one day’s classroom-based teaching a week and then on-the-job training the rest of the time.”

His employer agreed. “If you weren’t in full-time employment, other companies were taking people on to do the apprenticeship, I was just lucky that I had my job already, so nothing changed for me in terms of pay and conditions.”

The course follows the college term, with exams, assignments and presentations due, as well as class work. “You need to be prepared to get the head down, but what is great is that you get to bring back what you’ve learned and apply it,” says Casey.

The apprenticeship has fired him up to go and get a Level 8 degree in supply chain management. He still loves music and performs regularly, but has no regrets about his choices. “In the grand scheme of things I made the right decision.”