Let an apprenticeship drive your career to new heights

From logistics to auctioneering: ambitious plans put apprenticeships on the agenda 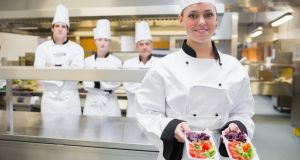 The traditional craft apprenticeships such as carpentry, plumbing, and plastering, have now been joined by a wider raft of less obvious options – think auctioneering, sous chef, or logistics

Those seeking an alternative to college or university, or even a later-life career change, should take another look at apprenticeships. From aircraft maintenance to auctioneering, the path to a fulfilling career could be much smoother than you think.

Ireland’s apprenticeship offering has widened considerably in recent years, explains Maria Walshe of Solas. The Further Education and Training Authority are in the middle of an ambitious expansion project when it comes to apprenticeships; by 2020 the goal is that there will be 30,000 people engaged in 70 different types of apprenticeships.

Walshe says this has been a significant development. “It came about after a review in 2013 of apprenticeships that identified a lot of strengths in the current offering but also the need for expansion into new sectors. The State and industry are now working closely together to provide these apprenticeships and address an identified need.”

The traditional craft apprenticeships such as carpentry, plumbing, and plastering, have now been joined by a wider raft of less obvious options – think auctioneering, sous chef, or logistics. Walshe says both types are equally relevant in today’s job market.

“The traditional apprenticeships are excellent in their own right and they’ve been around for a long time. They lead to great careers and I often think of the aircraft maintenance apprenticeship being a great example of the apprenticeships in that space. People might not necessarily think of that as an option, but all of the main airlines have apprentices on their teams.”

What differs with the newer apprenticeships is the delivery and the qualification achieved – while the traditional apprenticeships offer a QQI (Quality and Qualifications Ireland) Level 6, some of the new cohort will award up to QQI Level 10, or doctorate level.

It has been opened up as an education route for everyone, and not just those leaving school

Solas is also trying to challenge some common misperceptions in relation to apprenticeships. Many still view them as a “fall back” option if the Leaving Cert results haven’t put them on the path to college or university, says Walshe. “We really want to tackle this notion of apprenticeships as an alternative or a second option. We are trying to let people know that apprenticeships are of equal measure to the CAO when it comes to thinking about your future career options, and that they should start looking at them when they are in Transition year or fifth year.” Solas has been working closely with the Institute of Guidance Counsellors to ensure that second-level students are aware of all their options.

Walshe adds there is also the misguided idea that apprenticeships are solely the domain of school-leavers. “With some of the different options that we now have coming on board, it has really opened up the whole area to career-changers or often we will have people who have done a year or two of college and then decided to do an apprenticeship. It has been opened up as an education route for everyone, and not just those leaving school.”

Earn while you learn

Unsurprisingly, one of the main attractions for people is the opportunity to “earn while they learn”. “Particularly for those changing careers, the fact that they can earn a salary while acquiring a whole new set of skills is very appealing,” agrees Walshe.

Despite the obvious benefits, right now only two-to-three per cent of school-leavers will choose an apprenticeship, compared with 60 per cent progressing to third-level education. Female participation in apprenticeships remains particularly low.  Solas is also working hard to address this, says Walshe. “We are trying to bring more females into the traditional apprenticeships such as electrical work. ESB has done a lot of work in promoting apprenticeships among young women.”

Kieran Casey freely admits his CV is equivalent to that “of five people’s”. He had previously completed a Level 7 course in CIT in automotive technology and management and ran his own garage fixing motorbikes, as well as a host of other jobs. Wanting a change of scene, he came across the Solas apprenticeship in stonecutting and stonemasonry with Kerry Education and Training Board (ETB). Eighteen months later and he is working with the OPW restoring historic buildings and has just completed phase 2 of his apprenticeship.

“I was signed up to do another course and that fell through. Then I heard about the stonecutting and stonemasonry opportunity and thought it sounded very interesting.”

Casey is a big proponent of studying while on the job. “It’s on-the-job training and then out to the Kerry ETB for the theory part of it. It’s a better way of learning as with college, it can be very separate from the job, with too much theory. They may not even like the job after leaving college, whereas this way you get a better idea earlier of whether it is for you or not.”

It will take four years to complete the apprenticeship. “You could be doing decorative stonework on beautiful new homes or you could be restoring historic stonework on 14th century castles. There is so much variety in this work.”

Jeroen Hoppenbrouwer, originally from the Netherlands, is currently undertaking the commis chef apprenticeship coordinated by the Kerry Enterprise Board. In his past life he was a nurse, but says that when he realised his heart wasn’t in it anymore, he knew it was time for a career change.

“I loved nursing and worked in it for many years, but I came to the point where I knew I needed to do something different.” Hoppenbrouwer began working as a waiter, where he heard about the opportunity to do a commis chef apprenticeship. “I knew immediately that it was for me – I love food and working with it, so was delighted to be able to train in this area while still continuing to work. Our tutor is a chef with a great passion for food and cooking and I feel privileged to be able to learn from him.”

He agrees with Casey that the apprenticeship structure was the main reason he was able to take the leap. “It is great the way it combines learning with working, and you can earn money while training for a new career. I would recommend it to anyone.”