This year’s Science Week, which is organised by Science Foundation Ireland, focuses on climate action including how trees have the power to help us tackle the climate challenge - and win 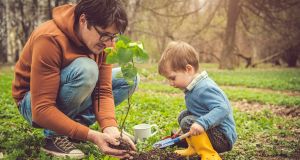 Now in its 24th year, Science Week aims to engage all of us with science of all kinds. Photograph: iStock

Science Week 2019 is all about how individuals can help combat climate change, one tree at a time. As part of the effort to help people understand the part they can play in climate action, state forestry agency Coillte has provided 30,000 trees which will be planted around the country during Science Week, which takes place from November 10th to 17th. The trees are a mix of sapling trees to be distributed nationwide for planting by schools and community groups.

It’s a highly cooperative initiative, taking place in communities nationwide with the assistance of the Tree Council of Ireland and Easy Treesie, an action group which aims to help school children plant one million trees by 2023.

The Office of Public Works (OPW) is also participating, providing sites for the planting on the grounds of some of the State’s most historic properties including Emo Court, the Phoenix Park and Kilkenny Castle.

Some of the trees will be available for collection at science festivals which will take place across the country during Science Week but most are going to schools, residents associations and Tidy Towns groups nationwide.

“The issue of climate change is the most important science issue facing us at the moment. This initiative is an opportunity to talk about the science behind climate change, and about what actions we can take, the impact they might have and the payoff we might expect in relation to capturing carbon emissions.”

As trees grow, they absorb and store the carbon dioxide emissions that are driving global warming. “Planting a tree is not the fastest but it is one of the most effective ways we know of capturing carbon,” she says.

New research indicates that there is enough space on the planet to plant enough trees to tackle the climate challenge facing us. “This is something that as individuals we know how to do, and we can do it,” says Freeman

Now in its 24th year, Science Week aims to engage all of us with science of all kinds.

“When we talk about things like data privacy, or what Facebook is doing with my data, about the use of artificial intelligence, or gene editing and the circumstances in which it should or shouldn’t be allowed, if you feel so removed from science that you can’t take part in the conversation, that’s not democratic. What Science Week says is that you have a right to be part of the conversation,” she says.

“It’s now more important than ever that people are part of the conversation because everything from health to economics to environment management has science at the heart of it.”

However, as a country we are still way off the European average of 40 per cent and have the second lowest forestry level in Europe, after Malta.

Not alone does forestry provide economic benefits, including rural jobs, it provides social and amenity benefits too, as the annual 18 million visitors to Coillte’s recreational forests can attest.

A forest’s real power however is environmental. “Forestry has positive impacts on climate, which is why we are so keen to get involved in Science Week’s tree planting initiative,” says Coillte’s managing director of forestry, Mark Carlin.

Trees suck up carbon from the atmosphere and lock it away in their wood, a process known as carbon sequestration. In a managed forest, trees are harvested and used for construction, providing a greener alternative to materials such as concrete.

“Irish forests absorb four million tonnes of carbon a year, or 70 per cent of all emissions from Irish cars,” says Carlin. “If you left a forest unmanaged, trees would naturally start to die, which would emit the carbon again, which is why the real success of managed forestry is that for every tree we fell we plant three in its place, which maximises the amount of carbon a forest can absorb and lock away.”

Another aspect of climate change is the impact it has on habitat. “There isn’t just a climate emergency, there is a habitat emergency too, which is why nearly 100,000 hectares of Coillte’s estate is managed for biodiversity only,” he says.

The 30,000 trees Coillte is providing to Science Week have all been grown in its own nurseries and include oak, birch, alder and willow.

“Our involvement in SFI’s project is about raising the profile of science. Foresters are scientists too. We’re always looking for initiatives that are close to our heart, and this is one.”

The OPW’s Tree Officer, Cormac Downey feels similarly. He manages trees in the agency’s portfolio of 30 National Historic Properties, from the gardens of Glebe Gallery in Donegal to Garnish Island off Cork.

By their nature, most of the trees on such properties are mature. Thanks to Science Week, many of these state owned properties, which are open to the public to enjoy, will receive hundreds of young trees.

The OPW is delighted to be involved, says Downey. “One of my duties is to promote public awareness of the benefits of trees and SFI’s Science Week initiative ties into that beautifully. I’m particularly delighted schools are getting involved because establishing a tree brings benefits that go on for generations. It’s about putting the right tree in the right place and climate-proofing our planet, which is why this initiative is hugely important.”

Science Week takes place from November 10th to 17th with science events and festivals across the country. For more information, visit sfi.ie.