Life through a lens: Samsung S8 brings photography to next level 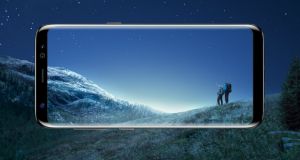 The larger screen size, combined with a screen resolution of 2960x1440 pixels makes the camera the market leader for mobile photography

The battle for mobile-phone market domination continues with as frenetic a pace as ever, with Samsung very much a top player in the competition.

The release of the South Korean brand’s Galaxy S8 is their latest salvo in the market place and brings with it a sleek all-glass design, digital home button and wirelesss charging, in an overall casing that is arguably the most attractive on the market at present. It has a full-glass screen with curved edges, and ultra-wide display of 18.5:9, as opposed to the traditional 16:9; a feature which plays directly to one of the phone's major strengths: its camera.

The larger screen size, combined with a screen resolution of 2960x1440 pixels makes the camera the market leader for mobile photography – as well as the premier mobile phone for viewing video content online due to being the first phone certified as Mobile HDR Premium – and is combined with a staggering array of features and editing tools to bring the camera to the next level. This is all complimented by a 12 mega-pixel rear-camera and an eight mega-pixel front-camera.

The varied list of tools in its editing suite includes a number of features that are directly linked to improving and tailoring portraits – or selfies – many of which can be applied either before or after pressing the capture button, including skin-tone correction; eye-enhancing and face-slimming tools; spotlighting faces; smart-auto to track faces in shots; and auto adjusting for an optimum combination of all of those features.

For both portrait and landscape photography the selective-photo function enables the camera to mimic best-in-class Digital SLR lenses by blurring backgrounds and mimicking depth-of-field changes that usually only an array of lenses can achieve.

The F1.7 lens the S8 uses, paired with the dual-pixel sensor, also sets the camera up to be perfectly geared for night use.

The S8 incorporates its own selection of filters and camera modes – such as food mode – to enable optimisation of all the settings in an instant, or when under time pressure.

It’s a photographer’s dream all packed into a piece of equipment you can hold and use with one hand.

Here is our photographic journey through Dublin with the Samsung S8:

Couple in bike shop
Chewie and Kerryming, with their dog, behind the shop counter of On Track bike shop at 32 Cook Street

Three South Americans in Dublin
Three English students, Karen Blanco from Venezuela, and Micaela Rodriguez and Fatima Burgos from Uruguay, enjoy the Dublin sunshine on the grounds of Trinity College. Karen tells our photographer: “I love Dublin, it’s like another world compared to Venezuela.”

Camera notes: exposure raised to bring colours to life. Faces brightened to pop them from the background. Tone curve raised to separate subjects from background.

Camera notes: classic filter added. Brightness and saturation raised and shadows lowered; all done to give a traditional black and white film-style image.

Camera notes: green tone-curve and saturation both raised to bring out the ivy on the building’s façade.

Camera notes: hue and saturation both raised to maximum to turn greens to purples and blues to oranges. Contrast maxed out to deepen the colour of the sun.