In the last in the Danone InSync series Deirdre Mullins meets Sammy Leslie, who turned her family’s castle estate into a thriving business while facing life’s challenges head on 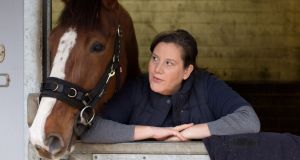 For Leslie, riding a horse is like a form of meditation; she finds the bond between herself and her horse therapeutic. Photograph: Declan Devlin

Sammy Leslie is credited with transforming Castle Leslie and its 1,000-acre estate from a rundown pile on the brink of irreversible decline into the award-winning hotel and equestrian centre that it is today. She is the trustee of the Co Monaghan estate, which her family have inhabited since the 16th century.

At 51, Leslie is in a good place, claiming to be the happiest she’s ever been. It was a bumpy road getting to this point, negotiating bereavements, divorce and cancer along the way. She describes her breast cancer ordeal five years ago with characteristic no-nonsense sensibility: “It was a big pile of crap, but that’s life. I’m the one in three.”

She endured a year of treatment, including surgery, chemotherapy and radiotherapy, but approached it as she would a job. Shortly before her diagnosis, she had completed a seven-day residential personal development course that she says gave her the strength to cope with the disease and its treatment. Leslie describes it as “a beautifully designed and cleverly crafted rollercoaster”, saying it was the most “groundbreaking” thing she’s done.

A passion for horses has been Leslie’s mental health staple throughout her life. For Leslie, riding a horse is like a form of meditation; she finds the bond between herself and her horse therapeutic.

She recalls growing up in a house that was alive with interesting debates around the dinner table and beyond. No fewer than eight different religious belief systems were represented in the family, and she says diversity was the norm.

Being the girl from “the castle”, children in the area assumed that she was spoilt and arrogant. On the contrary, her childhood was unsettled owing to a “complicated” family situation and undiagnosed dyslexia.

It was a childhood that saw Leslie attend nine different schools and change class group twice, making her always feel like the new girl in class. In hindsight, she appreciates these difficulties – they taught her “coping skills, determination and to listen to her gut”.

Sammy Leslie is the final subject in a journey that brought me to meet five remarkable Irish women as part of the Danone Activia InSync series. Each one was asked to describe what living “InSync” means to them, and how they manage to find balance in their lives. Each answered these questions differently, but common threads are consistent in each story.

Leslie loves horse riding because it brings her to “another place”, and all of the women described something similar when talking about their chosen form of expression: for Easkey Britton it’s surfing; for Helen James it’s designing; for Michelle Moroney it’s yoga; and for Lauren Smyth it’s dancing. Each described their InSync moment as being when they are in “the zone”, and free of distractions.

As the five women in the series have shown, flow experiences occur in different ways for different people but, thankfully, it’s a state that all of us can experience.  Positive psychology teaches us that there are many factors that must be present to get into a state of flow and one of them is the merging of action and awareness that is most commonly known today as mindfulness. This involves bringing one’s awareness to the present moment, a theme that cropped up many times throughout the interviews.

Easkey Britton and I did mindful breathing on the beach in Rossnowlagh, Co Donegal before we went surfing. When I practiced yoga with Michelle Moroney in Co Clare, she reminded me continuously to breathe. One of the most common ways mindfulness is cultivated is by using the breath as an anchor to the present moment.

Mindfulness doesn’t have to be about sitting cross-legged meditating, but can be incorporated into everyday life. In some mindfulness centres, a bell is sounded every 20 minutes. When residents of the centre hear the bell, they stop what they are doing and take three mindful breaths.  We can do this in our everyday lives by ringing our own internal mindfulness bell. It can be done when you are waiting at traffic lights or waiting for a kettle to boil. Whatever trigger you choose, it is all about stopping, breathing and connecting.

As I examined this topic over the past five months, I’ve found that there is no one way to be InSync. But there are habits and practices that we can cultivate to make that state more attainable. Like the women in this series, we can all get into a state of flow with our chosen passion, whether it’s running, painting or playing an instrument. And breath is with us every moment of our lives, giving us instant access to a more mindful way of being.

The most important lesson I’ve learned from the journey to be InSync is to hold the intention for self-care as a priority in my own life. We need to learn how to stop, to find a balance between the frantic pace of our lives and the need to be still and present.

Learn to take care of ourselves in a way that grounds us in the present, and we will have opened a door to living a more fulfilling and happy life.

THE INSYNC JOURNEY
Sammy Leslie’s story is the final instalment in this series. The stories of the other women featured can be found at irishtimes.com/liveinsync.

Britton lives a nomadic life but having a home base in Rossnowlagh is what makes it work for her, she says. Here, life is centred around family and the sea. “When I come home, it’s very grounding for me and I can immediately find myself again.”

“If you don’t look after yourself, you’re no good to anyone. I do everything in my life better if I look after myself.” She struggled with feelings of guilt in the past but has come to realise that, if she is not prioritising self-care, she is doing everyone a disservice.

Smyth isn’t sure where she gets her strong sense of determination. “It’s just one of those things that are inside of me. Growing up competing, I learned to have the drive to keep going until I achieved what I wanted.”

LIVE INSYNC: A MESSAGE CIRCLING THE GLOBE
The Live InSync project is an international media campaign, launched by Danone Activia, that runs in many countries worldwide. Danone Activia believes that when women feel truly “InSync” they can be at their best, unlocking their full potential. Being “InSync” is the moment when you are in the zone, free of distractions. It is the moment when women feel a sense of harmony, order and control, they say.

Using the life experience of real women, the series attempted to capture the essence of what it means to reach equilibrium in your life, one that defines personal success for you. It’s not about material success but, rather, the sense of achievement and balance that comes from living life to the full – on your own terms.