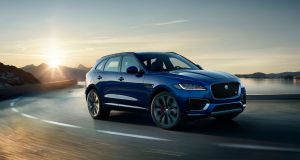 "The F‐Pace was designed and engineered as a performance SUV with exceptional dynamics, everyday usability and bold design.” Dr Ralf Speth, CEO of Jaguar Land Rover.

The Jaguar F-Pace, the iconic car maker’s first foray into the premium SUV market segment, has taken not one but two highly prestigious international awards. The F-Pace won the overall World Car of the Year Award for 2017 as well as the 2017 World Car Design of the Year award with both accolades being announced at the New York International Auto Show earlier this year.

It has also proven exceptionally popular in the Irish market since its launch here in June of 2016. “The Jaguar F-Pace has really enhanced and extended our brand offering and now accounts for 50 per cent of sales,” says Jaguar Land Rover Ireland sales director Eddie Kavanagh. “The F-Pace has been a fantastic addition to the Jaguar brand. We are very proud and honoured to have won the two awards. Not many cars receive such accolades.”

Winning these two awards endorses the talent and great work of our teams that have delivered the world’s most practical sports car and Jaguar's fastest selling vehicle.”

He says the F-Pace has taken the premium SUV market segment by storm since its launch a year ago. “It’s a beautifully designed car and that has a lot to do with its success”, Kavanagh adds. “The SUV segment of the market is growing very strongly year-on-year, particularly here in Ireland.

Unsurprisingly, Jaguar was keen to get in on that market. “There has been a significant change in the market”, he notes. “People’s needs have developed over the years. They are looking for something more practical but still want style and comfort - it’s a lifestyle choice. The F-Pace ticks those boxes for a lot of people. We call it the ultimate practical sports car in that it’s a perfect mix of beauty, dynamic handling and everyday versatility.”

But the key factor in its success is the fact that the F-Pace is very much a Jaguar. “It’s a combination of Jaguar styling with SUV characteristics”, he points out. “Jaguar has put its own stamp on the SUV space. The F-Pace is still distinctively a Jaguar; it is an exceptionally stylish SUV with aerodynamic Jaguar performance. This makes for a very desirable SUV. We have had a wonderful reaction to the car and it has attracted new customers to the brand since its launch last year.”

This is echoed in the words Dr Ralf Speth, CEO of Jaguar Land Rover, speaking as he accepted the World Car of the Year award: "The F‐Pace was designed and engineered as a performance SUV with exceptional dynamics, everyday usability and bold design. Winning these two awards endorses the talent and great work of our teams that have delivered the world’s most practical sports car and Jaguar's fastest selling vehicle.”

In taking the World Car of the Year Award the Jaguar F-Pace had to be first chosen from an initial entry list of 23 vehicles from all over the world, then make it to a short list of 10, and after that to a final shortlist of three which was announced in Geneva in March.

The cars were selected and voted on by an international jury panel comprised of 75 top‐level automotive journalists from 23 countries around the world with KPMG overseeing the voting process. To be eligible for the overall World Car award, the cars must become available for sale on at least two continents during the period beginning January 1, 2016 and ending May 31, 2017.

The World Car Design of the Year category, and the corresponding award, are meant to highlight new vehicles with innovation and style that push established boundaries. This is the second time Jaguar has taken the honour in recent years with the F‐Type having won in 2013.

A panel consisting of six highly respected international design experts was asked to first review each candidate, and then establish a shortlist of recommendations for the jurors. The experts commented that the “design of the F‐PACE is both sensuous and expressive. It maintains the visual link with recent models of the brand, whose expressive pitch has leant towards low road-hugging proportions. It is a standalone attraction when parked on the curb side next to any of its contemporaries.”

According to Jaguar director of design Ian Callum, the F‐Pace is the company’s first ever SUV “but it is clearly recognisable as a Jaguar and for it to win the 2017 World Car Design of the Year trophy vindicates our decision to bring our unique design principles and dynamic qualities to a new sector of the market.”

The Jaguar F-PACE is available from €43,700 excluding delivery and related charges. For more information visit jaguar.ie