Sponsored by University of Ulster 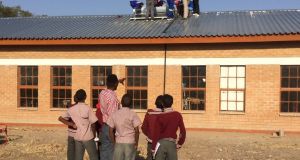 The SolaFin2Go project involved the provision of entry-level solar systems to a school and teachers’ homes in Jamataka, Botswana.

A team at the Ulster University Centre for Sustainable Technologies (CST) is helping households in sub-Saharan Africa to access affordable electricity and hot water. The team has been working in Botswana and Zimbabwe over the past three years in three projects utilising novel photovoltaic (PV) and patented solar thermal technologies developed at Ulster University.

According to Dr Mervyn Smyth of CST, more than 600 million people in sub-Saharan Africa live without access to electricity and 90 per cent of the population burn solid fuel for cooking, boiling water, lighting and heating. This gives rise to a number of issues including poor health and wellbeing and environmental damage which are being exacerbated by population growth and urbanisation.

SolaFin2Go is the first of the projects. This involves the provision of stand-alone solar systems that deliver cost effective and affordable access to electricity and thermal hot water for off-grid, rural households in the village of Jamataka, Botswana.

“The Centre for Sustainable Technologies is tasked with taking research concepts into more impactful arenas,” says Smyth. “We are always on the lookout for interesting areas to exploit the technologies we develop. We also have a spin-out company called Solaform to commercialise the technologies. When Solaform was looking for a commercial partner a guy called Robert Hanna in Botswana contacted us.”

Hanna’s company was helping people access finance to fund solar installations in Botswana so was a natural partner for a project. “We looked around and got funding from Innovate UK for the SolaFin2Go project in Botswana,” says Smyth.

The project involved the provision of entry-level solar systems to a school and teachers’ homes in Jamataka. The systems comprised a combination of technologies including solar PV and a highly-innovative solar thermal device known as Solar Catcher. Developed by the team at CST, the device works like a thermos flask by taking in the heat of the sun to heat water during the day and storing the heat overnight for use the next day.

The school and homes were kitted out for electricity but were never provided with it because the grid hasn’t reached the village yet. “This was a perfect opportunity to test and prove the concept. They had computers and photocopiers but had to use petrol generators to power them. Put in a solar PV panel to power them and the Solar Catcher to provide hot water. We installed them three years ago and they have proven effective for producing hot water and some electricity.”

The success of SolaFin2Go quickly led to another more ambitious project. “We had set up small energy hubs in homes and we asked ourselves about the possibility of connecting them together. What if we created a distributed network in a village and then connected two villages and then more? There could be sharing and trading power between users and villages and externally back to the grid.”

This could have particular benefits for people who can’t afford a solar system or whose houses are not structurally strong enough to support one. “You can have a centralised solar PV hub to charge batteries. People can hire them and use them for a few days to charge their phones and so on.”

The aim is to have these hubs and networks owned and operated by a Desco (distributed energy services company) owned by the village. “There could be commercial opportunities here with the Desco repaying investors who fund the systems,” adds Smyth.

SolaNetwork has led on to the SwanaSmartStore project which is developing intelligent solar storage systems which will provide reliable and affordable household energy access and sustainable support for weak and stressed electricity grids in Zimbabwe and Botswana. “A lot of homes there are connected to weak grids and suffer from a lot of black and brown outs. By generating power for people not connected as well as those with unreliable grid connections we can give them electricity and hot water security.”

Smyth points to the added commercial potential of these projects. “There are so many spin-offs possible. There could be entrepreneurial activity based around the community energy hubs. People could open hairdressers and barbers and so on using the hot water and electricity. And communities could sweat the assets by using excess electricity either to charge batteries or sell back to the grid. These communities could become energy prosumers.”