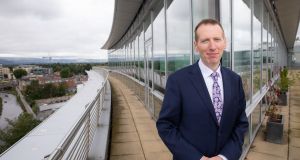 Ireland is blessed with abundant offshore wind energy resources but little or no effort was made to exploit them until relatively recently. That is changing as a result of the Climate Action Plan (CAP), which has set a target to develop at least 3.5 gigawatts of offshore wind energy by 2030. “This has effectively been increased to 5 gigawatts by the new Programme for Government,” notes Eirgrid chief infrastructure officer Michael Mahon.

“We are now at a point where we have a set of targets to work towards,” he adds. “A number of projects have been in waiting for several years. These are planned by various different developers with experience of developing offshore windfarms in other countries.”

But it is not as simple as just building a windfarm and bringing the power ashore at the nearest bit of coastline. “There is no point in building offshore windfarms if we are not ready for them on land,” says Mahon. “We need to have the onshore network in place to connect to the offshore windfarms and to distribute the power. In the medium to long term, a high level of co-ordination will be required.”

This issue is being addressed by a new government policy framework for a delivery model for the offshore grid in alignment with the National Marine Planning Framework, which governs offshore developments.

Eirgrid engaged consultants, Navigant, to prepare a report to look at different delivery model options. Broadly speaking, the two main models in use internationally are plan-led and developer-led.

Under a developer-led model, developers prepare the requirements for consents, select and pre-develop wind farm sites and develop and build both offshore wind farm and transmission assets. Those assets include offshore substations, export cables and onshore connection assets. This is the model in use in the UK.

Under a plan-led model, a state body or the grid operator is responsible for the complete process of wind farm site selection and pre-development and offshore grid connection development. This model is applied in the Netherlands.

In Ireland, the plan-led model would see the government either establish a new body or delegate Eirgrid to do this and run auctions for the development of offshore wind farms in certain locations. Private companies would develop these on a design, build, operate and finance (DBOF) model with the state guaranteeing a certain price for the electricity produced.

But there are options in between the two extremes. Four possible grid delivery models for Ireland were assessed by Navigant, ranging from a fully developer-led model to a fully plan-led model. The models represent a set of options, each with their own advantages and disadvantages, and elements of the four models could be combined to form a wide range of additional model options.

The first and fourth options were the developer-led and plan-led models. The second was described as plan-defined and would see developers building wind farms in accordance with certain rules and conditions laid down by the state. Option three would be plan-led but would see developers taking responsibility for offshore wind farm transmission asset construction, ownership, operation and maintenance.

According to the Navigant report, a transition towards a more plan-led model option could offer a pathway to leverage the timing advantages of more developer-led models in the short term and allow greater coordination of onshore-offshore grid development in the medium to long-term.

“Internationally, there has often been a transition from one model to another as needs change and infrastructure gets developed,” says Mahon.

The Department of Communications, Climate Action and Environment is currently running a public consultation on these options and is due to make a decision within the next few months. After that the Commission for the Regulation of Utilities (CRU) will run a consultation to inform its decision on a regulatory, investment and remuneration model to govern the development of the assets. Ultimately, this will decide on how developers get paid for the power they produce.

All going well, it is hoped that planning for Ireland’s next generation of offshore wind farms could commence before the end of the year. “These are quite complex decisions to make,” says Mahon. “We only have nine and a half years to go before 2030 and we have to get moving as quickly as possible.”