Do nutritionists ever eat carbs? How do you lose weight long-term? We asked four dietitians for their insider tips 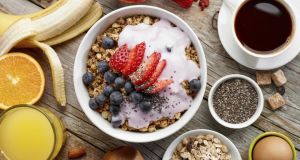 Healthy eating is about getting as wide a variety of foods as possible to get a good mix of nutrients but, says the dietitions, it is really important to enjoy food

1. No one will go hungry when working with a dietitian

“We’re talking about sustainable changes made gradually, not starving yourself,” says Walsh. “Losing weight doesn’t mean going hungry or deprivation. In order to lose weight and keep it off, change needs to be sustainable. You need to look at all the things that lead to you having extra weight on, all the behaviours, and act on them, to be successful,” she says.

2. They’re not going to judge you

“People often feel they’re going to be judged coming into the office. People will often tell me, especially for weight-loss clients, that they will try to lose weight before they come to see me,” says Hearne. They’ve seen it all, and what’s important to a dietitian is that you actively want to make a change. They won’t judge you for your current lifestyle.

“It’s all about sussing out what their goals are and making the plan individualised for that person,” says McConnell.

Few dietitians will simply hand you a food plan, according to Hearne. “If people want a really strong foundation, they need to think about why they want to lose weight and be honest with themselves about what has got them to this point. It can be hard and painful, and it’s why there is always a box of tissues on my desk,” she says.

4. It’s not just about weight

While many clients come for weight-loss related reasons, your diet has a huge effect on your general wellbeing. “Most conditions and diseases can be either cured or improved by adding foods into the diet and making slight changes to the foods that you eat,” says Walsh, who notes that irritable bowel syndrome sufferers can see results after a few days on a dietitian-issued food plan.

Morrissey agrees, noting: “Nutrition is actually a really powerful tool in reducing our risk of heart disease and stroke. In fact, 80 per cent of cardiovascular disease is preventable and nutrition plays a really strong role in preventing it. There’s a huge amount you can do for yourself to reduce your risk,” she says.

5. They want to ban diets

Diets won’t help you long term, says each of the four dietitians. Sustainable change has to be your goal, which usually means slower progress.

“Don’t start a diet. Don’t do it to yourself because they really don’t work,” says Hearne. “People want that quick fix, they want all their weight gone yesterday, whereas if people are more patient and accepting that it will take time, they actually will develop better habits and keep their weight off. We see the research that says only 2 per cent of people who follow any particular type of diet are ever successful long-term. They’re not a long-term change.”

Diets don’t work, agrees McConnell. “There is always going to be a new fad diet lurking around the corner, usually promoted by a celeb to make it more enticing, but the truth is, very restrictive diets may cause deficiencies and are hard to keep going on because they do not fit into a normal lifestyle.”

6. Not all fat was created equal

“Our messaging around butter hasn’t changed. It is high in the bad saturated fat, which increases our cholesterol levels. Butter is really something to be had as a treat rather than an everyday fat source,” says Morrissey.

7. Carbs and gluten aren’t all bad

The biggest misconception Hearne hears day-in, day-out is that carbs are bad for you. There’s no need to cut them out, she says.

“Carbohydrates are a really important energy source and a really important fibre source, but if we eat a plate full of carbs, that’s not necessarily good either. It’s much more difficult to train yourself to eat less than to actually just cut it out. Actually training yourself to have one potato instead of three is much more difficult to do but actually will stick with you long-term,” she says.

McConnell agrees, adding the recent trend for avoiding gluten isn’t necessary either, and that you should get tested for coeliac disease, rather than self-diagnosing. “Being on a gluten-free diet is very restrictive and can mean you may lose out on important nutrients,” she says.

8. Protein is not just for gym bunnies

Everyone needs the proper amount of protein, not just those pumping iron all day, says Walsh. “I wish people knew about the importance of ensuring adequate protein in their diet when trying to lose weight. Protein is necessary to prevent muscle loss during weight loss and encourage the body to lose only its excess fat. If you lose muscle, your metabolism slows down, which can result in the regaining of lost weight. Additionally, when you lose both muscle and fat tissue instead of just fat, you end up becoming a smaller version of yourself rather than a leaner version,” she says.

9. But you might consider a trip to the treadmill

They can’t work weight-loss miracles with food alone, unfortunately. “Our body is designed to move, not to sit. It’s regularly said now that sitting is the new smoking. Exercise needs to be integrated into someone’s life in order for it to be sustainable. Every 1,000 steps burns about 44 calories,” says Walsh.

10. They know the healthy eating struggle

“I’m human first and a dietitian second,” says Morrissey. “People do assume as dietitians we have these perfect diets but we are human. I’m conscious of what I eat of course, but in a way dietitians can be a bit more relaxed about what we eat because we have that view of our overall eating patterns. What you eat over time is going to affect your body, not what you eat in one day.”

“My taste buds weren’t removed upon graduating. I too enjoy ice-cream, chocolate and cheese,” says Walsh. “I am not a naturally skinny-minny, nor do I try to be, my aim is to be the healthiest version of myself, without compromising my quality of life.”

Hearne’s tactic is to avoid bringing her “kryptonite”, chocolate covered Oreos, into the house at all. Sometimes it’s the only option to stop herself, she says.

11. There is no way to drop a stone quickly

You’re going to eat more vegetables, like your mammy told you, we’re afraid. “There’s not one person on this planet who is overweight from eating too many brussels sprouts. Sometimes we need to focus on what things we need to add to what we’re doing rather than all the things we shouldn’t eat.”

Doing a weekly food shop, meal planning for the week, and preparing your vegetables ahead of time can all help get those veg in, says Hearne. Morrissey also warns not to forget to control your portions, citing research that says our plates have grown 4ins wider since the 1960s. The 2011, updated Irish food pyramid offers good portion advice, she says.

12. Be careful where your food advice comes from

We’re bombarded with advice online and in the media, but nutrition advice has to come from dietitians, says Hearne, noting that “nutritionist” is not a protected term, meaning anyone can claim to be one.

“Too many people out there don’t have the proper qualification and that’s a huge issue. Misconceptions come from that. Dietitians are the only health professionals recognised in this country with the proper qualifications and training. Too often people who aren’t well trained give some really bad advice, like you can’t eat gluten, when there’s no evidence to back that up. Having evidence-based information is so important,” she says.

13. They want people to enjoy food

While they might ask you to limit the nice things and add more vegetables to balance out your diet, ultimately getting you to enjoy food, even if it’s slightly healthier food, is their goal.

“Just enjoy food. Get back to enjoying food. Everything is down to a calorie or how much sugar or fat is in something, and we’re not actually enjoying real food. We need to get back to that a little bit more,” says Hearne.

“It’s about eating as wide a variety of foods as possible to get a good mix of nutrients but it’s really important to enjoy food. Of course food is about nutrients and nourishment, but it’s about much more than that in terms of the cultural, social and emotional aspects as well. Food is not just fuel,” says Morrissey.