Meat for the masses: New York’s Meatopia returns to the Open Gate Brewery 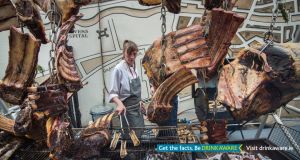 The brewers and beer sommeliers at Guinness have worked closely with the international live-fire chefs and the team at Meatopia. Photograph: Tom Gold

Guinness X Meatopia, the festival of incredible food, music and great beer is gearing up for its Dublin dates with tickets on sale now and great demand expected. This intimate three-day event, that puts beer, food, fire and music centre stage takes place from July 6th - 8th in the Open Gate Brewery, the home of beer innovation at St James’s Gate - and it's bigger and better than ever.

This isn’t your average food festival. Festival-goers will get up close and personal with world-famous chefs from Galway, Tipperary, London, New York, Ohio and Seoul, who are coming to Dublin to stamp their own identity on the event with never-been-tasted-before dishes that create a celebration of the finest, ethically-sourced meats and specially brewed beers alongside long-standing favourites.

The idea of Meatopia was originally to bring good meat to the masses, but, as one of its founders, Mat Kemp, explains, it quickly took off. “This is an all-day event based around food and the star performers are the chefs – they are the lead guitarists of our age,” he says.

Using tonly live fire (no electricity or gas is allowed), each of the chefs will conjure up a unique dish cooked over smoke and flame, including:

New York's Esther Choi will offer up Kalbi, a marinated short rib hung on a hook and smoked over alder along with rice cake, roast garlic and lettuce wrap and a grilled whole head of kimchi.
Paired with Guinness X Meatopia Brew.

Ian Colgan is a specially-trained Guinness beer sommelier (one of just 160 in the world), and he has been working with his team on a series of unique beers to complement the dishes on offer.

So, in addition to old favourites, there are brand-new innovations specially created for the event, including a salt & pepper beer. “Without getting too much into the science, taste is different to flavour. This year we picked six flavours that everyone will know and challenged each chef to work with a different one, then the team at the Open Gate combined a range of new and interesting short run beers, developed just for the show, with some Guinness classic to match each of those flavour profiles.”

At the Cutting Room Stage, festival-goers will quickly find themselves amongst a new and wonderful mix of passionate individuals and collectives from the worlds of beer, food and fire.

So, while you eat and drink you can catch butchery demos or meet the inspirational Lord Logs from the London Log Company (above), who travels the world studying woods and different techniques of fire cooking. Bryan McCarthy, head chef at Greene's Cork, will also take to the stage to tackle flavours and foraging while great female chefs talk up the weekend's boldest flavours and fiery conversations.

And the entertainment doesn’t stop there. Throughout the weekend, crowds will be entertained by a great lineup of music ranging from the dirty gospel of New York’s Reverend Vince and the Love Choir, to one of London's oldest and most respected brass bands, Brassroots and the Dublin institution that is Ukulele Tuesday.

All the meat at Meatopia is ethically sourced and the main supplier is Kettyle Irish Foods, proud pioneers of the best in craft butchery. The very best Hereford beef will be in Esther Choi's Korean Kalbi ribs. There'll be Lough Erne lamb and the black and white pork selection hails from County Cavan and Hampshire breed pigs.

Visit guinnessopengate.com for more information, and to buy tickets.

GUINNESS X MEATOPIA is a strictly over 18s event.