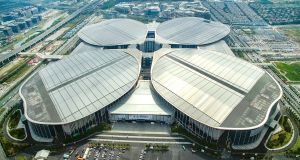 The National Exhibition and Convention Centre in Shanghai is the world’s largest single-block exhibition complex with a total floor area of nearly 1.5 million sq m.

On Monday, November 5th, next, 24 Irish companies will join more than 2,800 exhibitors from around the world at the first ever China International Import Expo (CIIE). The exhibition, which takes place at the National Exhibition and Convention Centre in Shanghai – the world’s largest single-block exhibition complex with a total floor area of nearly 1.5 million sq m – is expected to attract more than 150,000 purchasers from across China and international markets over the six days.

Plans for CIIE were first announced in May 2017 by Chinese president Xi Jinping at the Belt and Road Forum for International Cooperation.

Speaking at a Chinese Embassy event in Dublin to welcome Irish participants to CIIE, Ambassador Dr Yue said the Expo was a significant move for the Chinese government as it confirmed its firm support for trade liberalisation and economic globalisation and actively opening the Chinese market to the world. “It will facilitate countries and regions all over the world to strengthen economic cooperation and trade and promote global trade and world economic growth in order to make the world economy more open,” Dr Yue said.

“CIIE will be a great event,” he continued. “Any Irish companies who have missed out on this one are welcome to come to the next one in 2019. We want to work with all countries, regions and international organisations to make CIIE a world-class expo, providing new channels for countries and regions to do business, strengthen cooperation and promote common prosperity of the world economy and trade.”

Dr Yue described the One Belt One Road initiative as an engine for global sustainable growth. “In the next five years, China is expecting to import products and services valued at more than $10 trillion and this provides a historic opportunity for enterprises across the world to enter the huge Chinese market.”

Chinese overseas investment is expected to reach $750 billion over the same period. “This will provide enormous opportunities for all countries, including Ireland”, Dr Yue added. “It will also create new platforms for countries and peoples around the world to share opportunities.”

The scale of the CIIE is simply enormous. So far, more than 2,800 exhibitors, including more than 200 Fortune 500 companies and industry leaders, have confirmed their attendance. Minister for Business, Enterprise and Innovation Heather Humphreys will lead an official delegation to attend the event.

“This is the largest trade mission from Ireland to China in recent years,” says Wen Chen, chairman of the Ireland China Science and Technology Association (ICSATA) one of the promoters of CIIE here in Ireland. “In all, 27 Irish organisations will participate in the exhibition, 24 companies along with Bord Bia, IDA Ireland, and Enterprise Ireland. Bord Bia and Enterprise Ireland will host collective stands exhibiting agri-food products, education, consumer products, high-tech products, and intelligent equipment.”

Irish participation is very important, according to Dr Yue. “The relationship between China and Ireland is the strongest it’s ever been,” he said. “Trade between the two countries stood at $11 billion in 2017, that was up 36.7 per cent on the previous year. In the first half of 2018, it reached $6.71 billion, up 24.4 per cent on the same period in 2017.”

Indeed, the Expo takes place against a backdrop of a burgeoning relationship between the two countries. Despite a sluggish world economy and slowing global trade, Ireland and China have both managed to achieve remarkably high growth in the past few years, and bilateral trade has continued to rise. According to statistics from China, bilateral trade volume grew by 8.8 per cent to $7.11 billion in 2015. In 2016, bilateral trade reached $8.088 billion, with a 13.75 per cent increase. Trade volume for the whole of 2018 is expected to exceed $12 billion.

The two economies are regarded as highly complementary by the Chinese government. China exports machinery to Ireland and imports agri-food products, medical devices, chemicals and live animals. China has grown to be the second largest market for Irish dairy and pig meat, and the third largest export market for Irish food and beverages. In 2018, the Chinese government approved six beef processors in Ireland to export their products to the Chinese market, making Ireland the first EU country which had suffered from the BSE crisis in the 1990s to resume beef exports to China.

Speaking at the embassy event, Bord Bia chief executive Tara McCarthy said CIIE represented a very significant opportunity for Irish exporters who have ambitions to grow their relationship with China. “We have more than 10 Irish companies confirmed to participate on Bord Bia’s ‘Enjoy, it’s from Europe’ and Origin Green stands in the meat and dairy hall,” she said.

“The objective will be for our companies to create partnerships of mutual benefit with Chinese counterparts and relationships that are sustainable for years to come. China is a very important market for us and it has made a large contribution to the fact that our food exports have grown for eight consecutive years.

“We now have access for Irish beef and that is creating further opportunities. The highlight of our trade visit to Shanghai in May was the signing of the memorandum of understanding on Irish participation in CIIE. Every wish we have had since then has been granted.

“In an increasingly uncertain global trading environment, I welcome President Xi Jinping’s initiative to develop open trading relationships through this Expo,” McCarthy added. “I look forward to visiting the Expo and welcome guests to visit the Bord Bia Ireland stand in Hall 8.2H.”

Looking back on the relationship with China, McCarthy noted that Bord Bia’s first time to exhibit in China was at the SIAL food fair in 2006. “We have had a growing engagement since then, learning how to do business in the market. China will soon be our second largest Bord Bia overseas office. That is testament to the strength of the engagement over the years.”

“China has made a huge commitment to increasing trade over the past few decades and the Chinese market is very important to us,” Enterprise Ireland divisional manager Leo McAdams added. “We now have three offices in China, our largest international presence outside of the US. Today, 300 Irish exporters are selling into China and exports passed €1 billion not long ago. Exports continue to grow strongly, and China is now the seventh largest market for Enterprise Ireland clients. In our 2020 strategy, our aim is to grow exports to China to €1.6 billion.”

That ambition is being supported by activity on the ground in both countries. “We organised 850 client meetings with Chinese companies in the first six months of the year,” McAdams said. “Eighty Chinese companies came to Ireland to meet prospective Irish partners. CIIE complements what we are doing in the market. It will help us build on our growing presence in China.”

Investment between Ireland and China has also been on the rise in recent years. According to Chinese statistics, by the end of 2017 about 400 Irish companies had invested $1.84 billion in China with a focus on clean-tech, ICT and agri-food sectors.

China has created more than 1,000 local jobs in this country. The Chinese companies involved invested mainly in aviation leasing, food processing and the ICT sector.

In June 2017, Bank of China established its Dublin branch to provide corporate financial services in Ireland. In 2018, Wuxi Biologics and Zhong Ze Culture made greenfield investments or acquisitions worth about $600 million, which will create more than 400 new jobs in this country. The overall trend in two-way investment between China and Ireland is clearly very encouraging, with great potential for future growth.