Fitbit’s new Sense is a clever companion for fitness fans that also helps manage health and wellbeing, thanks to data to drill down into to track heart rate, stress levels, sleep scores and more

Running is something Orla got involved in after her move to Dublin 8 in 2006. Video: The Production Company 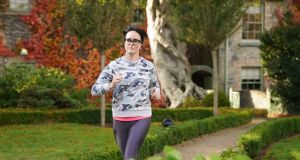 Orla McDermott runs for a number of reasons. “I like the feeling of being strong and fit. It’s my time, I listen to music, or stick on a podcast,” she says. Photographs: Conor Mulhern

“Mum, mum, mum”, is a refrain heard by many a busy stay-at-home parent, and that’s no different for Orla McDermott, who juggles a busy household caring for two small kids, while squeezing in some work on the side as a telecoms engineer.

Orla lives in Dublin’s bustling Inchicore with husband Colin, children Emmet and Tara, dog Holly and cat Millie. Life can be quite fast paced but Orla has the perfect tool at her disposal to help her reset: running.

With a jam-packed schedule, she makes sure to set aside some time each day to get out and pound the pavement, and if she’s not running, then she does an energetic at-home Hiit workout.

“My days consist of cooking, tidying the house, shopping; the usual stay-at-home mum stuff. Therefore I tend to get up in the morning, throw the running gear on straight away and after I drop the kids to school I try to fit in a run in the Memorial Gardens or along the canal. By the time I’m home at 10.30am, I hop in the shower and get on with rest of my day,” she says.

Running is something Orla got involved in after her move to Dublin 8 in 2006. Prior to that the gym and lifting weights was her exercise of choice. But running has gotten under her skin. “I started taking the dog along the canal and it just became a routine,” she says.

“I do it for a combination of factors. I like the feeling of being strong and fit. It’s my time, I listen to music, or stick on a podcast and I don’t have someone saying, ‘mum, mum’, all the time,” she smiles. “It’s nice, I can choose to think about things, or not think about things at all.”

No matter what her mood or energy levels on any particular day, Orla never regrets getting out for a run. “Running is like a skill that you learn and you can do it anywhere. If you like travelling, like I do, you can throw the runners on and off you go, you can explore a new city or area. It’s actually a really nice way to see somewhere new,” she says

As someone who likes to keep track of her progress, Orla wears a Fitbit Sense which helps track key health and wellbeing data as well as tracking her runs using built-in GPS, especially useful while training for a half marathon, something she does every year. It’s the brand’s most advanced health smartwatch, with lots of new features such as the first electrodermal activity (EDA) sensor  for managing stress levels on a smartwatch, and it has a battery life of almost a week.

“During the summer I sign up for the half marathon, so those months are mapped out. I dedicate myself to doing two to three short runs during the week, they are about six to eight kilometres in length. On a Saturday or Sunday morning, depending on which night I’ve had a few drinks, I do a longer run, building up to the 21 kilometres.

“In the winter it’s different, I try to do maybe two six kilometre runs and one 10 kilometre run at the weekend. That’s about maintenance and keeping fit, as I like the feeling of being fit,” she says.

“While training for the half marathon I also try to do home workouts that help my body and legs get stronger. I just get the mat out in the kitchen and hop around,” she says. “The Fitbit is great for tracking all of this and even on days that I don’t do a run, I’ll see I’ve done 16,000 steps so there is a sense of achievement,” she adds.

I like using the Fitbit to track my distances and cardiovascular fitness using heart rate zones, to see how well I’m doing

Speed isn’t high up on Orla’s list of priorities, but this year, with no marathon to spur her on, she linked in with Liffey Valley Athletic club who ran a get faster tutorial programme on Instagram.

“They had an experienced running coach who would put up a very detailed programme, and if you asked any questions they would get back to you comprehensively and quickly. I did use it to get faster, I found it challenging and I enjoyed it. It was just something new to try,” she says. “I like using the Fitbit to track my distances and cardiovascular fitness using heart rate zones, to see how well I’m doing,” she says.

“The Sense also monitors your heart rate, stress levels, blood oxygen level, and takes your temperature – something very useful in the current climate. It needs to get your baseline data over a couple of nights, and then it measures your skin temperature when you’re asleep. If you are sick or fighting off an infection, your heart rate goes up as well as your temperature so it would be interesting to see how that works,” she says.

It’s topical, and more than 100,000 Fitbit users have joined a Covid-19 study, which has found that Fitbit’s algorithm can detect nearly 50 per cent of coronavirus cases a day before the onset of symptoms, with 70 per cent specificity. The research is promising and may mean that wearables could play an important role in the early detection of infectious diseases by acting as an early warning system for our bodies.1

“I also find the sleep tracker pretty interesting,” Orla says. “When I stopped bringing my phone to the bedroom, I noticed my sleep patterns get better. My sleep length improved by about one hour per night and the Fitbit told me my sleep quality had improved too. This was proof I should leave my phone downstairs at night,” she says.

Sleep data is part of Fitbit’s new Stress Management Score, which calculates how your body is responding to stress based on your heart rate, sleep, activity level and electrodermal activity from the Scan app. Ranging from 1-100 – a higher score indicates you are showing fewer physical signs of stress – the score is coupled with recommendations to better manage stress, like breathing exercises and other mindfulness tools.

While Orla’s energy levels and motivation are already high, some decent music on a shorter run propels her on. And a podcast is a comfortable companion on her longer weekly run.

“I’m currently listening to the George Gibney podcast by Mark Horgan. It’s grim but sensationally put together,” she says, adding, “I tend to save that for my long run. I wait till Saturday morning to listen to it as I get lost in it. If it’s really engaging I’ll lengthen my run just to keep listening to it. The Fitbit is great as I can link it to Spotify and control it from the watch.”

A winter ski trip is something Orla and husband Colin save towards each year and being fit on the slopes is a huge motivation to push herself during the darker, colder months.

I also want to be an example to my kids, and let them see exercise is not a chore.

“In December and January I usually go hell for leather. I concentrate on workouts at home to make sure I’m strong enough to enjoy the holiday. This year I’ll have to create a fictional goal, because between the half marathon and skiing, they help keep me fit. So I think that’s where the Fitbit will be useful. I like being able to look back on the week and see I’ve been active.

“There’s something about the concept of tracking your progress, and if you didn’t track it, you didn’t do it! It gives you that sense of achievement,” Orla says. “I also want to be an example to my kids, and let them see exercise is not a chore.”

Be in with a chance to discover the Fitbit Sense for yourself by entering to win one at irishtimes.com/competitions/fitbit2020