W hen it comes to understanding mortgages, after you have decided how much you can afford, the next most important thing is the rate of interest – and it is in your interest to do your research. The tracker ship which pegged rates to ECB rates has long since sailed, so getting really low-cost loans is much harder than it used to be. On the plus side house prices are also a whole lot lower than they used to be so it really is swings and roundabouts. Very high-stakes swings and roundabouts.

The key to getting the best value is having a low loan to value ratio (LTV). The LTV is the amount that you borrow compared to the value of the property you buy and the lower it is the more anxious a bank will be to get your business.

There was a time during the boom when 100 per cent mortgages were available but banks now insist that you stump up at least 8 per cent of the capital so for a first-time buyer the LTV is a maximum of between 90 per cent and 92 per cent (Bank of Ireland says the average first time buyer LTV is around 80 per cent).

Once you have that in place it will help to understand the mechanics of your mortgage: the capital – the amount you’ve borrowed – and the interest charged on the loan. In the early years, most of your payments will go to paying off the interest, while a smaller portion eats away at the capital. As you get nearer to the end of the term, that switches and you start paying more off the capital each month.The next choice you have to make is between a variable rate or a fixed rate – there are also split mortgages which allow you take a bit from column A and a bit from column B. Both fixed and variable mortgages have pros and cons. Typically over the lifetime of a mortgage, a person on a standard variable rate will save money but a person on a fixed rate has the security of knowing exactly how much they are going to pay each month for a set period and will not have to worry about what happens elsewhere. It sounds simplistic but the key is not to try and second-guess the market but to do what suits you.

And then there is the term of the mortgage loan or the length of time over which you agree to pay off the loan. The longer the term the less you pay each month, but a longer term also means paying more interest over the duration of the loan so it will ultimately cost you more money. Some banks offer variable rate customers the flexibility to overpay or make lump sum reductions.There are all manner of websites which will show you exactly how much your mortgage will cost but as Aine McCleary, the head of mortgages at Bank of Ireland points out, “there’s really no substitute for speaking with a qualified mortgage adviser, whether you’re close to buying your chosen property or even just starting the planning process”. 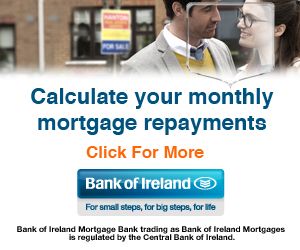