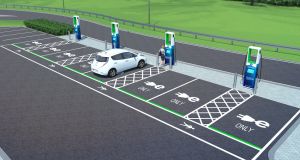 The Government’s Climate Action Plan has set an ambitious target of having almost one million electric vehicles (EVs) on the roads by 2030. Significant investment in the charging infrastructure is required to meet this goal.

Much of the nationwide charging infrastructure in place today has been provided by ESB, and the organisation plans to invest a further €20 million in a significant upgrade and renewal of the network over the next four years, with €10 million in support from the Irish Government’s Climate Action Fund.

“ESB is used to taking a long-term view, and we could see the benefits that electric vehicles could bring for society and the environment. We began to install chargers in every county and we now operate almost 1,100 charge points across the island of Ireland. The next phase of development will see us invest €20 million in high power charging hubs across the country, as well as upgrading the existing charging network.”

That investment will go a long way towards meeting the needs of the dramatically increased number of EVs on Irish roads envisaged under the Climate Action Plan, according to Hogan.

The investment programme has already begun with the replacement of over 40 standard chargers across the country. “We want to upgrade the existing network first and then put in more inter-urban fast charging points to support people making longer journeys. Increasing the availability of chargers will improve customer confidence in the infrastructure. Over the next four years we will replace all of the standard chargers and install up to 50 fast charging hubs. Super hubs will be capable of charging eight cars at the same time, while smaller hubs will be able to charge up to four.”

At present, it is free for EV drivers to charge their vehicles at ESB points, but this is set to change in the coming weeks.

From November 18th, drivers using ESB public charging points can opt to pay 0.33c per kilowatt hour on a pay-as-you-go basis, or they can sign up to pay a €5 per month membership fee which will entitle them to a reduced rate of 0.29c per unit used.

People will be able to charge their cars at home, in their workplace, at filling stations and using the public infrastructure

“A particular bugbear is people parking their cars at charging points for hours on end,” he says. “That is why we are introducing a €5 fee for people charging after 45 minutes to encourage people to move on.”

He believes the Government target is stretching but achievable. “The range of cars is increasing all the time and the vehicles on the road now can travel up to 450 kilometres on a single charge. That will be closer to the petrol experience and will take people from Dublin to Galway and back. They can stop for a coffee on the way and one of the new high-powered chargers can deliver 100 kilometres of power in six minutes. That will deal with the range anxiety which is preventing many people from making the switch,” he says.

Find out how we’re creating a brighter future at esb.ie/brighter-future