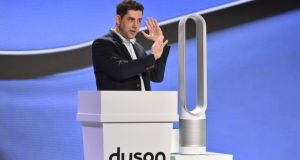 Air pollution is something that cannot always be seen but for many people it is a very real problem. Recent research points to evidence that there are several pollutants present in homes, some of them with the potential to have an impact on human health in the long term.

What’s even more surprising is the fact that very many of these pollutants can come from seemingly harmless household items and products.

Paul Dawson is global engineering director for environmental control at Dyson and he has travelled the world detecting and identifying pollutants where people live. “We do a lot of research and when we first started looking into pollution we felt we needed to get into people’s homes and understand what is hanging around in their air.

“Some of the more noticeable ones in the UK and Ireland are given off by fairly innocuous things such as cleansing agents, or new carpets or furniture. That smell, when you think about it, is chemicals coming into your home environment.”

Even more worrying is the fact that during home testing, Dawson came across substances such as formaldehyde. Formaldehyde can come from natural or industrial sources and in some countries is used in building materials like carpet or foam insulation. It can lead to breathing problems in humans, he says.

“There was an article published in the UK recently that said if you mix Limonene, the compound in cleaning products which is responsible for the lemony/citrus and sometimes pine smell with Ozone, which can come from various appliances, it can actually form formaldehyde in your home. That’s pretty scary,” he says.

“You get pollutants such as benzenes coming off candles. People living close to busier roads can see higher amounts of benzene in their homes and this is coming from car emissions. Nitrogen dioxide (NO2) is another and, for example, in January this year it was reported that London broke its European limit for Nitrogen Dioxide for the entire year in just five days. This mainly comes from diesel cars but can also come from gas stoves, so if you’re cooking on gas and you’re not ventilating your area properly, this can occur.”

Dawson says more research is needed into the long-term effects of these substances on human health.

Other potential pollutants include carbon and coal dust from wood-burning fireplaces and stoves which emit particulate matter during combustion, Dawson says. “It’s ironic that as the West has grown richer, we’ve been turning back to log burners and coal fires as a source of keeping warm. The emissions coming from these are actually what plagued London around the great smog in the 1950’s. In our effort to have these luxuries we are again polluting the air with ultra-fine particles.”

Even pets can spread microscopic material around the home,  as well as household air fresheners and cleaning products containing volatile organic compounds (VOC’s) which can be released into the air. According to a study carried out by the US Environmental Protection Agency, toxic fumes released from cleaning solvents and deodorants are some of the most common indoor air pollutants.

Dyson has spent several years researching and focussing on the problem of air pollution and in particular, nano-particles, with a view to removing them from the home.

The Dyson Pure Hot + Cool Link, which Dawson was heavily involved in creating, was designed with both of these problems in mind. It also works as a heater and cooler, while offering air purification all year round.

He explains how the purifier works. “It sits in auto mode, sniffing and sampling the air to make sure there are no pollutants in the room. As soon as it detects a pollutant, it switches on, drawing the air flow into the filter and projects that air flow around the room capturing the pollutants that might be in the room. It does that until it registers that the air is clean. “

It will also remove pollen from the air.

“Some hayfever sufferers don’t realise that the particles that contribute to their symptoms are airborne. “When I have hayfever attacks, I feel dreadful. Our purifiers detect pollen particles and allergens, and swing into action to remove these from the air.”

But for many people, if it’s not tangible and cannot be seen, they may well question the presence of pollutants in their home. Dawson says while testing the product in his own home, he changed the filter after six months and “it was black”.

For those who love technology, there is also a connected element to the product and they can remotely monitor the inside air quality, which is reported to a Dyson Link App, even while being out of the house.  Users can also stay on top of the air quality inside their homes, see the purifier and set a new target before “very poor” levels are reached.

Dawson keeps one in the bedroom of his two-year-old twins.  “I can see the air quality, and overnight, when they were younger, I could keep a constant 19/20 degrees in the room, while also purifying the air. I could also track it remotely without getting out of bed, which was great,” he says.

What is the Dyson Pure Hot + Cool Link purifier fan and how does it work?

The Dyson Pure Hot + Cool Link provides fast even room heating in winter, cooling in summer and purification all year round. It automatically purifies the pollutants it detects in the home, while reporting the live indoor and outdoor air quality to the Dyson Link App.

Most air purifiers can help capture pollution, pollen, mould, bacteria, and odours. However, some other purifiers rely on motors to force air through filters to capture particles, allowing pollutants to pass through and back into the air people are breathing.

The Pure Hot + Cool Link fan uses Dyson’s Air Multiplier technology and a 360-degree glass filter to capture up to 99.95 per cent of allergens and pollutants, as small as 0.1 microns from the air.

Sensors inside the machine detect changes in conditions, before automatically adjusting airflow to maintain the air quality.

For concentrated heating and cooling, air is released from a jet and accelerated over an airfoil-shaped ramp to produce a focused flow of air. For whole room use, a second jet of air joins the first, broadening its angle, to produce a wide stream of powerful airflow.

By developing new software in the form of the Dyson Link app, (available to consumers with a WiFi connection once the app is downloaded on an app-enabled device) Dyson are able to help consumers track indoor air quality. If auto-mode is selected, the machine can then automatically react to the monitored air quality and resolve the issue.

Putting the Dyson V11 through its paces

Measuring the real benefits of connecting your home appliances