Creating a buzz about pollination through music 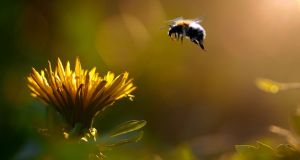 Dr Una Fitzpatrick: “It’s clear that pollination is important and it’s clear that the decline of pollinators is a problem. The National Pollinator Plan is our attempt to address the problem.” Photograph: iStock

“Bees can be a hard sell,” says Catherine Casey, Laois County Council heritage officer. “The National Pollinator Plan is attempting to highlight that there is a significant problem with bees in Ireland. A lot of people think that there is just a honeybee and a bumblebee. People are often surprised to hear that there are 98 species of bees in Ireland and nearly all of them are under threat. The pollinator plan was put in place to look at that, but also to look at other insects that pollinate our plants, that are important for our society, our agriculture and our well-being.”

Recording the number of bees in Irish society and practical habitat measures are key elements of the National Pollinator Plan, but raising awareness amongst the general public of the diminishing bee numbers around the country is of vital importance. With support from the Creative Ireland Programme, a five-year initiative which places creativity at the centre of public policy, the National Pollinator Public Art Project invites artists to develop work which raises awareness of the decline in pollinator populations.

If people take one or two small actions, then the overall impact on pollination could be enormous

“Laois County Council gave a broad brief for artists to submit a proposal relating to the National Pollinator Plan and we got over 20 responses from artists in six different countries, from musicians, visual artists, painters, ceramicists and sculptors,” says Casey.

“The composer Ian Wilson won the project with his imaginative proposal. His plan is to write a combination of musical compositions, which will be performed with a saxophone, which will reflect the feeling of the buzz of bees, which we felt was the right instrument to depict bees.

“We thought his response was the most creative of all the artists’ applications. The use of the saxophone for his composition imagines the feeling that you get from the buzz of the insect.

“He has gone around the groups of Laois and interviewed bee keepers, tidy towns groups, road engineers and school children to get a background on everything they are doing to help pollination, why pollinators are important to them and also what issues they have with them.

We hope that through Ian Wilson’s composition, the public will find out what they can do in their garden to aid pollination

“Ian has also gone around the county and recorded the sounds of the various insects around the sites, the different buzzes and sounds of the bees. He will put the concept of those noises together with the people’s opinions on the pollinators, to create a whole new composition to be performed by Cathal Roche.”

That composition will be performed in a sneak preview at the Pollinator Party in Portlaoise during Heritage Week, with a full performance of the composition to be scheduled for November.

“It’s clear that the decline of pollinators is a problem. The National Pollinator Plan is our attempt to address the problem,” says Dr Una Fitzpatrick, project coordinator for the All-Ireland Pollinator Plan at the National Biodiversity Data Centre. “We’ve been overwhelmed by the amount of interest there has been in the plan from the Government and non-governmental organisations. There’s this huge interest, but the beauty of the involvement and support of the local authorities and the Creative Ireland Programme, is that it’s bringing the message to whole new audiences that we could probably never hope to reach on our own.”

“We hope that through Ian Wilson’s composition, and the other local authority and Creative Ireland supported initiatives, that the public will find out what they can do in their garden to aid pollination; if they then take one or two small actions, then the overall impact on pollination will be enormous.”

For more about Creative Ireland and to find out what’s happening in your local area, check out your county Culture and Creativity Plan, see creative.ireland.ie/en/local-plans

For more about the sneak peek of Ian Wilson’s composition during Heritage Week, see www.heritageweek.ie/whats-on/event/buzz-words-music-sneak-preview-1

For more about the All-Ireland Pollinator Plan, see www.biodiversityireland.ie/projects/irish-pollinator-initiative/all-ireland-pollinator-plan/