A bystander to action: warning signs of domestic abuse

Being a witness to domestic abuse can often leave a person unsure of how to act. Here are stories of people whose experience of domestic abuse was changed by the actions of a bystander 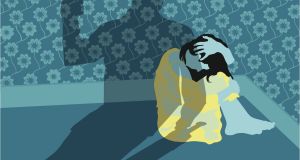 ‘Christmas is a dangerous time for lots of women and children because of the pressures that come with it and the drinking culture we’ve created in Ireland’. Illustration: Getty Images

Christmas is a special time but it can be an especially hard time for those suffering domestic abuse. Time off work can mean an abuser is at home for extended periods. Drink can act as a disinhibitor, with violence that may already be a feature of the abuse becoming even more dangerous. Where former partners are involved, negotiations around access to children can be met with aggression.

With over 300,000 people in Ireland estimated to have been severely abused by a partner at some point in their lives, domestic abuse may be more prevalent than you think. You may not be suffering from it but someone you love, know or simply pass on the street might well be.

As a bystander, there are some warning signs to look out for. It may be that a person seems overly anxious to please their partner, or talks about their temper, possessiveness or jealousy. They may be restricted from seeing family and friends or be limited in their access to finance.

Experts from organisations we spoke to suggest that, with strangers, you may feel someone is at risk of domestic violence if their partner is insulting or embarrassing them, shouting or being physically intimidating. Alternatively, a person may act in a way that seems excessively submissive or fearful. They may show or try to hide physical injuries, such as by wearing dark glasses indoors.

But once you believe you have recognised domestic abuse how should you act and how can you make sure it will be beneficial?

In many cases a simple “are you okay?” could give a person an opportunity to talk. Expressing concern in a non-judgemental way is vital. As is being supportive while not actually giving advice.

If it’s a stranger you are worried about, and you think it is safe and legal to do so, you could try to distract the aggressor involved. You could ask someone else to help, or, if you can find a quiet moment, you could possibly approach the victim to let them know you are concerned. If you have immediate concerns that someone is at risk of violence it is very important to call the Gardai.

As a bystander, you don’t have to “save” the person. But if you can find a safe way to acknowledge the abuse and direct them to specialist services or information, such as can be found on whatwouldyoudo.ie, you can help.

The following are stories from Irish people who have sought help from organisations like Women’s Aid, Sonas and Amen. They are designed to help allow us to understand domestic abuse from the victim’s perspective and explore how a seemingly small intervention from a bystander can create a big difference.

When I first met my ex-partner I was overwhelmed by his attention. I found it really flattering at the start. He would say he only wanted to be with me. It took me a while to realise that what he also meant was that I should only be with him ever. I don’t mean guys, I mean anyone.

Then I got pregnant and that’s when he turned physically abusive. He would shove me and hit me but nothing that would leave a mark or that he couldn’t explain like it was my fault – I had made him do it. He was very careful to ensure no one was ever around.

I developed bad post-natal depression. He would insult me all the time, say I was nothing. He had no relationship with our daughter but he said that he would take her away from me.

I went to the doctor because I knew I needed help. She told me about Sonas refuge. I rang from the doctor’s office and we stayed there. I started telling my family and friends what had happened. It had taken so long to get the words out, to believe myself, that when they did come out, I couldn’t stop.

To be fair to them, my family did try and ask over the five years he and I were together, why wasn’t I able to spend more time with them? Why were friends no longer on the scene? I would just say that these things happen or I was really busy in work.

I think if someone you love and care for is in what you think is an abusive relationship then it is worth saying to them – when it is safe to have that kind of conversation – that maybe you’ve noticed something. But you might have to have that conversation more than once because someone might not be able to hear you depending on where they are at. I have rebuilt my relationship with my friends and family. I have a safety order against my ex. My life has started again.

The problem began to arise as the kids grew older. When they were little my wife could rule with fear but as they grew and started answering back she started hitting them. I’d intervene and she’d hit me too.

I got a number of black eyes and when anyone would ask me what happened I’d say it was an accident at work. It was only when she hit one of our children at a match and a woman reported her to social services that things came to a head.

At the time I told them everything was grand because I was ashamed. But then one time she was going to do one of the children a serious injury and I got in the way and she hit me over the back of the head with something and knocked me unconscious.

I called social services myself and this time me and the children left with only the clothes on our back. If we hadn’t, who knows what might have happened. Only for that person making the call to social services that first day, I wouldn’t have known who to call when things got bad.

At the time I thought I was the only man in the world with this problem. It was only when I started researching it and found Amen that I had someone I could speak to about it.

Some of my friends said afterwards they thought something was going on but they didn’t want to come between a man and his wife. Yes there’s a risk you might be making a mistake but now I believe a mistake is better than doing nothing because it’s better to be safe than sorry.

Christmas, like all holiday times, was always a problem. I think it’s because there’s no one else around, so you’re that bit more vulnerable.

There are an awful lot of people out there living in fear. I’m only glad that woman made that call that day. It was the turning point. It got the ball rolling for me.

One day he was pushing for a fight, I told him not to bother, to just leave if he wanted to. That was the first time he was sober hitting me. I fell back, the kids were hysterical. My eye was all swollen.

Christmas is a dangerous time for lots of women and children because of the pressures that come with it and the drinking culture we’ve created in Ireland. Just after (the) court date he wanted me to visit Santa with him and the kids, and took offence when I refused. I was out with friends that night and when I got home he was hiding in the garden, waiting. I lost consciousness after the first punch, and again later in the attack.

My eyes, face and skull were fractured that night, and I have permanent scarring and nerve damage. My daughter’s third birthday was the following day, and I discharged myself from hospital to help her blow out her candles. I was readmitted on Christmas Eve for reconstructive surgery on my face.

He got a three-and-a-half year prison sentence, with the last year suspended.

I had been speaking to a social worker in hospital and she advised me to contact Women’s Aid. I’d heard of Women’s Aid before but I had the idea that it was only a helpline, a listening ear, and I had that from friends and family already. I’d always thought what could Women’s Aid do?

Have a chat, give a bit of sympathy but then I’d be back on my own again? Yet when I contacted them there was so much more that I hadn’t realised. Safety planning, court support, shelter, the extent of the services, the lengths they go to on your behalf, are incredible.

To anyone in the position I once was, I’d say: be brave and take a chance of having a better life for yourself. Never stay for your kids. Leave for your kids.

Having three kids by myself now is hard but it’s easier than when I was with him. They are happy and safe, which is what they deserve. I have normal worries now, just the same as everyone else. I have a great life.

(Names have been changed to protect identities.)

WHAT WOULD YOU DO?

What Would You Do is a national awareness campaign designed to raise awareness of domestic and sexual violence, to bring about a change in long-established societal behaviours and attitudes and to activate bystanders with the aim of decreasing and preventing this violence.

It shifts the focus of awareness activities from the victim to focus on engaging with bystanders to help prevent this violence and hold the perpetrator to account. It recognises that women and men are victims.