It’s back to the future at beautiful Breaffy 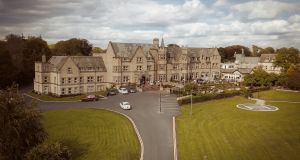 Breaffy House Hotel: Last year it hosted 85 weddings, with a number of brides and grooms choosing to arrive by helicopter as part of their wedding package

Arrivals at swish Breaffy House Hotel in Mayo come one of two ways, either they take the stately 3½-minute drive along its parkland driveway, or they come by helicopter. The number of happy couples choosing to arrive for their wedding this way has quite literally taken off.

In many ways the helicopter is a fitting symbol of the iconic Castlebar hotel’s resurgence, phoenix-like, from the dark years of the downturn. Hard to believe now but the property, which was for decades one of the country’s best-known luxury destinations, came close to closing during the recession.

It was a difficult time, recalls general manager Wilson Bird, and it put at risk the jobs of 140 staff, most of them born and bred in the locale.

“At one point we were within a month of closing down,” says Bird, who well remembers the difficult bank negotiations. For a while it was managed by Dalata, the hotel group headed up by hotel management expert Pat McCann, and it was he who persuaded the bank not to close it while awaiting a sale.

That allowed the elegant Victorian property to continue trading through the leanest years of the downturn.

The current, much happier, chapter of the 19th century property’s story began when a group of local business people came together to acquire it. As well as a collective sigh of relief from staff and their families, the move brought with it much-needed capital investment.

Over the past five years, the 19th century Victorian manor has undergone a transformative refurbishment programme to put it back on the map as one of the country’s foremost luxury hotels.

Today it offers some of the most stunning packages on offer anywhere in Ireland, such as a Champagne stay in a suite with helicopter tour, bottle of Moet & Chandon, and tour of the hotel’s wine cellar included.

The cellar is indicative of the top to toe transformation the hotel has enjoyed, with serious money spent acquiring some of the world’s most sought after wines. But the touches on offer throughout the hotel are a nod to its return to its luxury heritage, including Elemis spa gift sets and Ri Na Mara toiletries.

Little wonder that last year the hotel hosted 75 weddings, with a number of brides and grooms choosing to arrive by helicopter as part of their wedding package.

Indeed many of them choose to exclusively book Breaffy, allowing them take over all bedrooms in the hotel, and includes a fireworks display, helicopter ride, wedding band and a wedding banquet for 200 people.

With 36 hectares (90 acres) of rolling parkland, including 9 hectares (22 acres) of manicured lawns, the hotel has re-established itself as one of the country’s premier venues. It is known for pulling out all the stops too, including for the growing number of happy couples who opt for a stunning firework display to round off their special day.

Breaffy Spa has a range of treatments, from dry flotation therapy beds to hydrotherapy baths and a rasul mud chamber, which uses mineral-infused mud and steam to cleanse and relax. It has a full range of grooming and beauty treatments, including facials and massages as well as an elegant leisure centre with a pool, gym, steam, sauna and Jacuzzi.

Thanks to the investment programme it has a new bar, restaurant and private dining rooms as well as its new wine cellar, which has proven a huge hit. This beautiful, bespoke space was opened in September 2018 and already houses 28 Decanter Gold Medal Wines from the Bordeaux, Cote Du Rhone and Loire Valley regions.

The wine cellar, originally home to the old Gun room back in the early 19th century, is one of the property’s unique selling points where popular events such as the resort’s wine and food pairing nights, can be enjoyed by guests as part of a package.

For weddings, the hotel schedules a brief interlude where anyone from the bridal party can enjoy a couple of moments solace away from the wedding crowd.

No doubt the happy couple will be back within a few years with children in tow, because Breaffy House Hotel has won accolades for its family friendliness. As well as babysitting, kids clubs, events and activities, it has a “breakfast train” that sees the children collected from their bedroom door.

That allows parents to rise and breakfast at their leisure, ready for a day of fun and adventure ahead, enjoying all that this beautiful part of Mayo has to offer.

Just 2½ hours from the M50, it’s a gateway to the Wild Atlantic Way, with Blue Flag Beaches, cycle hire and horse riding on its doorstep, as well as the fascinating National Country Life Museum at Turlough House five minutes away.

As befits a hotel that knows the value of its beautiful surrounds, a huge emphasis is put on sustainability, which can be seen in everything from its kitchen garden polytunnels to environmentally friendly sourcing policies.

With so many great things going on, and the high occupancy rates to show for it, it’s hard to imagine the peril this beautiful property was in just five short years ago. Today Champagne corks are popping, fun is fizzing, and 234 staff are delighted that this exclusive Castlebar property is now firmly back on the destination hotel map.

To find the perfect package for you, see breaffyhouseresort.com