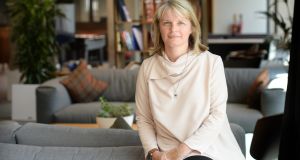 Twitter may have honed the world’s ability to distil insights into 280 characters but decidedly longer reads were a formative part of Twitter Ireland MD, Sinead McSweeney’s childhood.

“My biggest inspiration is my mother who was a great believer in the value of education. She was a teacher before she was married. The house was full of books, if you wanted to know how to spell a word you had to look it up and conversations were encouraged around the dinner table.”

McSweeney’s mother sadly passed away in January of this year. “She also gave me a belief that we are limited only by our ambitions.”

A qualified barrister who never practiced, McSweeney started out as Dáil recorder, became an advisor to the attorney general and moved to the Department of Justice, Equality and Law Reform with Michael McDowell.

She then spent years as head of communications for both the PSNI and An Garda Síochána, before being appointed head of public policy at Twitter in 2012, taking the top spot in 2016.

The peripatetic journey informs the advice she gives younger people. “Don’t stress about careers at 18. None of the jobs I have done since I left college even existed when I put down my Leaving Cert choices.”

There are, however, certain core skills you should try to attain, to future-proof yourself in the fast changing world of work.

“We need to encourage people to focus on learning and acquiring skills to do jobs that are not here yet. It’s not about knowledge because information is everywhere. It’s about problem-solving, analysis, critical thinking, and the people skills to resolve conflicts.” Resilience is vital. “You need that ability to bounce back from knockbacks.”

It proved particularly vital in policing, where witnessing serious tragedy and its long term impact takes a toll, but it is a characteristic she actively promotes in Twitter too. “I try to encourage resilience in the office, to show that there is something to be learned from both positive and negative experiences.”

It’s something impressed upon her by Hugh Orde, former chief constable of the PSNI. “He would say ‘I’ll forgive the mistake, but I won’t forgive the cover up’. That was his way of encouraging others not to be fearful, understanding that everyone can make mistakes.”

From former Garda Commissioner Facthna Murphy she gained maxims which still have currency for her. “The phrases he used come back to me all the time, about ‘checking information twice’, about the need to ‘see around the corner’ in terms of understanding the implications of what you do.”

Today, regular sessions with an executive coach help develop her leadership capacity, and she goes out of her way to help mentor young people.

She knows its value first hand. “Different people helped me along the way, such as Mary Harney, who made sure my name was in the mix when a job came up. I’ve never forgotten it and it’s something I try to do now. If someone tells me they want to change direction in their career, or is coming out of college looking to meet for coffee, I will always try, and if people say ‘do you know anyone’ for a role, I will make an effort to give names.”

She quotes Madeleine Albright’s famous line about there being a special place in hell for women who don’t help other women. The US’s first female secretary of state, who she hosted recently at Twitter, is a hero of hers. “She said women live their life in stages and I found that really reassuring in terms of the choices we make in relation to family for example.”

Speaking up about inner struggle is important, she says. “You will never think or feel anything that someone hasn’t already been through, so speak up and you will find others. Talk about it.”

She is a board member of Lust for Life, a youth mental health charity. “It’s about changing the way we talk about mental health, building the strength and capacity to cope before facing difficulty in life, rather than picking up the pieces afterwards.”

Physical fitness helps maintain her own health, and kickboxing is her drug of choice. “I enjoy it because you can’t think about anything else when you’re doing it. You have to concentrate on it 100 per cent.”

Getting to the top in male dominated sectors has been a hallmark of her career. “Politics and policing are both more male-dominated than tech, which has its own issues. But I haven’t had a sense of being held back from anything by being female.”

That’s not enough, however. Women who do make it to the top “have a responsibility not to be the aberrations,” she says.