Preparing your business for the practicalities of Brexit 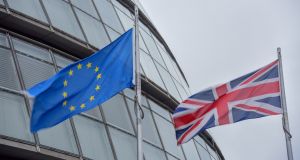 Bank of Ireland’s Lee Evans says it will be important to focus on foreign exchange during the coming months. “Currency volatility has increased over the past few years and it should be a significant priority for all Irish companies engaged in overseas trade or investment.” Photograph: Getty Images

Signs may point to a trade deal being reached between the EU and the UK but businesses still have to prepare for currency volatility and a new customs regime.

The resumption of negotiations on a trade deal between the UK and the EU should come as no surprise to anyone, despite the quite dramatic declarations of an imminent end to the process made just a few weeks ago. That’s the view of Lee Evans, head of foreign exchange trading and strategy with Bank of Ireland.

According to Evans, the overall mood in relation to the prospects of a trade deal is one of optimism and the currency markets reflect this. “The markets are rating the chances of a no deal Brexit at 30 to 35 per cent,” he says.

There are two main reasons, Evans explains. The first is that the talks are still ongoing and neither party has actually formally withdrawn from them at any stage. The second is the real progress that has been made on the key outstanding issues of the level playing field, fisheries, and governance.

“Progress has been made on them all and there is a general belief that further progress can be made,” he adds.

Further adding to that optimistic view is the very significant defeat handed to the UK government on its Internal Market Bill in the House of Lords. That has potentially removed a barrier to a deal and could even allow the EU to put a stop to its legal proceedings against the UK depending on how things go in the coming weeks.

Furthermore, in Evans’s opinion, the level playing field and state aid issues may not be as intractable as many think. “The UK uses state aid far less than other EU member states, if there are clear measures for dispute resolution on state aid it would give both sides comfort and the two sides may not be that far apart,” he says, adding; “There are quite a few ways to come up with a working disputes mechanism. And there might not ever be a need for one to be used. If they can come to agreement on state aid and disputes resolution the Internal Markets Bill could be withdrawn.”

But politics is the art of the possible and the optics will be all important in the final approach to any agreement. “Both sides will want to claim victory, and neither will want to be seen to have given away too much. As the two sides try to agree on the four key issues of the level playing field, state aid, fisheries and governance in the weeks ahead, the political choreography and sequencing will be vitally important,” Evans says.

He advises people not to place too much store in deadlines. “15th October has come and gone. Others have said the end of October was the real deadline, but the door is likely to remain open. The US election, which took place on the first week in November, might also give people an excuse to pause. ”

That said, Evans remains optimistic about the prospects for a deal. “It will be all about the political sequencing and choreography, but the EU is very good at that. Even a bare bones agreement will provide the opportunity to build a more comprehensive deal during what will be a quasi-transition period in the next few years. That’s why agreement on a dispute resolution process is so important.”

Events in London and Brussels naturally have an effect on currency markets. “The euro is trading at around 90 pence sterling as things stand. It ranged between 83p and 93p in the immediate aftermath of the Brexit referendum. The belief is that it will go to 98p or parity by year end if there is no deal. If there is a bare bones deal it will be in the high 80s. Brexit could cause additional action by Bank of England to support the UK economy as well; there is currently a debate on the pros and cons of negative interest rates and recent statements indicate the Bank is supportive of them. A move in that direction would put further pressure on the pound.”

Even without further cuts to UK interest rates the potential trading range of sterling could be significant with the difference between a no deal and a bare bones deal up to as much as 15 per cent.

“There has been a lot of focus on the tariff piece,” Evans notes. “But the foreign exchange markets are also of key importance. Foreign exchange and tariffs will be the first things to hit companies’ bottom lines.”

While there is little or nothing Irish companies can do in relation to tariffs, they can take action to mitigate the impact of exchange rate changes. “There are ways for companies to reduce their exposure to rate changes such as by hedging forward,” says Evans. “They can also look at getting customers to pay in euro, setting up foreign currency accounts, making changes to the supply chain to source materials from the UK, and creating an overall treasury policy for the business.”

Every business is unique and there is no one size fits all solution, however. “I would encourage people to get in touch with Bank of Ireland to discuss their foreign exchange options,” he says. “Our teams can help to make international payments and transactions as easy as possible for our customers.”

Bank of Ireland also has a dedicated Brexit Hub where businesses can find a wide range of resources. “The hub features useful guides to tariffs and foreign exchange as well as other resources from government, Enterprise Ireland, Bord Bia and a number of other organisations,” Evans notes. “Companies can also talk to Bank of Ireland’s team of specialists who can provide sector-specific advice on Brexit preparations.”

Warning: This service may be affected by changes in currency exchange rates.