Stunning scenery, water sports and Star Wars – the 2,500km route has a lot to offer 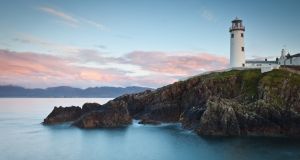 The lighthouse at Fanad Head, Co Donegal, is one of the delights of the Wild Atlantic Way.

The 2,500km Wild Atlantic Way is not just Ireland’s first long distance touring route, it is one of the world’s most magnificent coastal adventures – and way too good to leave to foreign tourists.

It hugs the entire western seaboard from the rugged Inishowen Peninsula in Donegal to the heritage town of Kinsale in West Cork. Whether you do it in stages, or all in one go, there are loads of things to see and do along the way.

One great way to see it is to fly into Donegal Airport, which has just been voted the world’s most scenic, beating rivals such as Nice and Melbourne. Hire a car that’s nicer than your own and start off with a circle of Ireland’s Inishowen Peninsula, from Derry to Letterkenny, taking in wild and wonderful Malin Head, the country’s most northerly point.

Visit An Grianán Ailigh, a magnificent stone ring fort that was mapped by Ptolomy of Alexandria in the 2nd century but reckoned to be up to 4,000 years old.

From Letterkenny to Bunbeg, take the Knockalla Coast Road to Fanad Head, for panoramic views across the estuary towards the Inishowen Peninsula and the Atlantic. Stop for a walk along Ballymastocker Bay, one of the most stunning spots in Ireland and voted one of the most beautiful beaches in the world.

Don’t miss the Slieve League Cliffs, among the highest sea cliffs in Europe, before heading to Bundoran, Ireland’s surfing capital. Hang 10, if surfing is your thing, and then clean up afterwards with a seaweed bath at Voya’s in Strandhill or Kilcullen’s at Enniscrone.

From there it’s on from Ballina to Belmullet, taking in Downpatrick Head, three miles north of Ballycastle in Mayo. Look out for Dún Briste - literally “broken fort” – a mighty sea stack.

Forage for wild food along the Killala shoreline with Wild Atlantic Cultural Tours, near Ballina before taking the Belmullet to Westport leg of the journey.

There’s more adventure to be found at Killary Harbour, with outdoor centres such as Delphi Mountain Resort and Killary Adventure Company in Leenane, Galway. From there it’s a skip into Galway city for an urban overnight.

From there explore West Clare and the Burren, heading from Galway to Kilkee. Get out of the car to hike the Doolin Cliff Walk, stopping off at the Cliffs of Moher. To see them at their most spectacular however, take a boat trip out to sea.

The Loop Head Drive along the western most tip of Co Clare is a leisurely and largely traffic free one. Look out for the giant white EIRE on the cliff tops at the very tip of the peninsula, a vestige of WW2.

You can stay in the 19th century lighthouse keeper’s house at Loop Head, before taking the road from Kilrush to Carrigaholt to take a Dolphin watch boat trip to see the Shannon Estuary’s famous bottlenose dolphins.

The Loop Head journey from Kilkee to Tralee brings you on to Castlemaine. If the weather’s good, take a boat trip around the Blasket Islands off Dingle and stop for coffee afterwards at potter Louis Mulcahy’s Dingle studio afterwards.

Take the Ring of Kerry from Castlemaine to Kenmare and get your Star Wars on with a visit to the monastic beehive huts at Skellig Michael, a Unesco World Heritage Site.

Or stay in the car and drive the Skellig Ring – with a pit stop at the Skelligs Chocolate factory – before heading off around the Beara Peninsula. On the stretch from Kenmare to Durrus stop off to take the 10 minute cable car journey to Dursey Island.

Lush Bantry and Glengarriff in Cork have their own temperate micro climate, it’s why the gardens are so gorgeous. Don’t miss Garnish Island in Bantry Bay which opens for the season in April and is famous for its rhododendrons and azaleas.

From here the drive takes you on to Mizen Head where it’s time to get out and stretch your legs again on a walk out to the lighthouse via a high arched suspension bridge. Unless you’ve a great head for heights, don’t look down. There’s loads of interesting exhibition material about keepers’ lives in the early 20th century and you’ll see Fastnet Lighthouse out on the horizon – star of RTÉ’s recent TV series.

West Cork is a great place to end your adventures. If you’re fed up driving, swap the car for a sea kayak and explore the coast with Atlantic Sea Kayaking or get back in the surf with Kinsale Surf School.

Just make sure to finish up at Kinsale to visit the star shaped Charles Fort, whiz around the Wine Museum or take a historical walking tour, but mainly because it’s the country’s ‘gourmet capital’. What better way to celebrate having completed the entire Wild Atlantic Way than with a slap up meal – before heading all the way back up again.