From baby boomers to Generation Z, multi-generational workplaces are becoming more common and organisations are benefitting from each generation’s varying skills and motivations 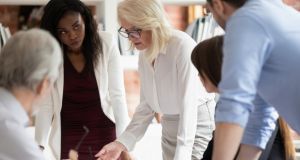 “For the first time, we have five generations working together in the workplace.” Photograph: iStock

When septuagenarian songster Rod Stewart took to the stage in Dublin’s 3 Arena earlier this month, his act was an advertisement for the multi-generational workforce. With a backing band and road crew including the complete alphabet soup of recent generations as well baby boomers and even older, the event was a live demonstration of the different age groups literally working in harmony.

But there is a world of difference between a relatively small group of people slickly performing a set list of songs and dance routines and a large organisation trying to get a diverse group of people to work together towards common goals and objectives without getting in each other’s way, however inadvertently.

The millennials are now becoming the managers. We didn’t really understand them when they were graduates and we still don’t, now that they are managers

“It’s a really interesting time to talk about the multi-generational workplace,” says Jameson International Graduate Programme head Sinéad D’Arcy. “There is such a lot happening in the workplace and the workforce at the moment. The workplace is changing, models of work are changing, and the workforce is changing. For the first time, we have five generations working together in the workplace. Each generation has different motivators and organisations have to understand them.”

While Generation Z, those born in the new century, are now coming into the workforce, their predecessor generation is taking over command. “The millennials are now becoming the managers,” says D’Arcy. “We didn’t really understand them when they were graduates and we still don’t, now that they are managers. By 2025, 75 per cent of the workforce will be millennials.”

The different generations may have different needs, but they are also very similar, she adds. “Research shows that there are more similarities than differences and it is important that we don’t fall into the trap of stereotyping them. We have to understand their different motivations.”

Tony Devine of The Grey Matters Network Points agrees and points to a recent Forbes article which indicated that Generation Z may be closer in thinking to baby boomers than they are to either Generation X or Y. According to the piece, this latest generation values stability and security above almost everything else.

I think the multi-generational workplace is a great thing. All the generations can learn from each other

“You look at the period they have come through in their lives,” Devine explains. “People were scarred by what they saw their parents and families go through. It might be easier to get generation Zs to work with boomers and older workers than we think. They might be more aligned than we think. Will we get boomers and generation Zs plotting together against the Xs and Ys?”

‘Not as much of a difference’

Tracey Donnery of Skillnet Ireland concurs. “One thing we see is that there is not as much of a difference as some commentators would say. That’s not to dismiss the different approaches to learning and working that each generation might have, and companies should take that on board when it comes to supporting them.”

The ability to manage the different generations will be a key differentiator when it comes to company performance as well as the ability to attract talent, according to Andrew Lynch of recruitment firm Mason Alexander. “I think the multi-generational workplace is a great thing. All the generations can learn from each other. Management have to adapt how they run the business, otherwise they won’t attract young people. Young people take their job very seriously and see it as a big part of their life. They want to feel that they are adding value to the business. Ultimately, that’s a great thing for a business. Money is not the biggest driver for a lot of people anymore, people want achievement and fulfilment. Management teams have to adapt to this. If they don’t, they will be left behind.”

One way of bringing the generations together is through what has become known as reverse mentorship. “Older and more mature workers bring more experience and a more mature approach to customer engagement, for example,” explains Donnery. “Younger people bring new ideas and innovation and different things to the table. They both have things to teach each other. It might be nothing to do with technology. It might be something like sustainability or immediate availability that matters to a younger person. You can have adaptive and innovative people in every generation. What learning and development professionals have to do is ensure there is a diverse approach to learning to have all of the workforce engaged in it.”

“Generation Zs are very good collaborators on projects,” D’Arcy adds. “Cross-generational teams are very important, and people can learn from each other. Older workers can mentor younger colleagues. Generation Z is the ideas generation. They bring their ideas to the table and older colleagues help shape them. Lots of reverse mentoring is happening where they learn from each other.”

Other changes are afoot as well. “Contracts of employment are changing a lot too,” she says. “The new generation is likely to have their own separate gigs and side hustles outside of work. A lot of people on our graduate programme are doing different things like podcasting and photography outside of the workplace. Employers need to be open to that.”

They have to be conscious of the importance of stability as well, however. “Young people also need to see long-term career prospects. They might join in marketing but move across to content generation or sales or HR and reinvent themselves a few times over the course of their career. Being open to that will help employers build loyalty among their staff.

“George Bernard Shaw said: ‘Life isn’t about finding yourself. Life is about creating yourself’. That is as relevant today as it ever was. People are looking for employers who will help them create themselves.”

And Tony Devine points out that generation Y is by no means the only game in town. “What’s happening is that companies are beginning to see that they are running out of people and labour to do the tasks they need done. In the UK, it is estimated that they will have 30.5 million jobs to fill in the next 10 years and there are only seven million workers coming through in that time to fill them. There is no reason to believe that the same situation won’t arise in Ireland. The only age cohort that is really growing is the over 55s.”