The environment, infrastructural assets and human capital are among the key drivers of M&A activity 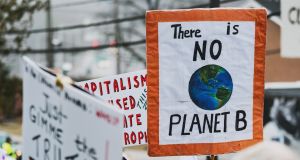 “Everyone is saying that climate change and environment issues are going to be drivers of M&A activity in future.” Photograph: iStock

You just can’t get away from it, unless you’re the self-proclaimed leader of the Free World perhaps. Climate change is having a profound influence on M&A activity around the world. Already, EU legislation is requiring pension funds to take sustainability into account in their investment decisions and environmental, social and governance (ESG) strategies are ramping up demand for companies involved in areas such as renewable energy and recycling.

“Everyone is saying that climate change and environment issues are going to be drivers of M&A activity in future,” says accounting firm BDO’s corporate finance partner Katharine Byrne. “It won’t be a significant driver of deals in Ireland in 2020 but it will be when the new ReFIT [Renewable Energy Feed-in Tariff] deal comes in.”

Promise of the real

With cash and bonds offering extremely low or even negative yields at the moment, investors are searching for relatively safe havens that will offer positive returns in the long term. This is placing a premium on infrastructural assets such as commercial property, energy, water and other utilities.

“Real assets are in demand,” says McFayden. “The high-deal flow is continuing in the infrastructure, energy and real estate sectors, demonstrating the continued appeal of assets that offer predictable returns and cash yields in a low-interest-rate environment.”

Activist influence on the rise

Activist shareholders are mainly concerned with increasing value to themselves and their fellow stockholders and work to bring pressure to bear on boards to adopt new strategies or change existing ones. In other cases, they may have more high-minded agendas such as the pursuit of environmentally sustainable policies. But in both instances their presence can have a major influence on M&A activity.

“Shareholder activism is driving strategy,” says McFayden. “Activism has continued to influence global M&A, whether driving deal activity or stopping it. A good example of this in an Irish context is CRH activist shareholder Cevian pushing for extensive structural improvements and divestitures which they believe will create greater value for the company.”

M&A as a weapon in the war for talent

Sometimes the strategic value of a company lies in its human capital or intellectual property rather than profit and loss numbers or physical assets. A feature of M&A in the technology sector has long been the acquisition of smaller, highly innovative companies by industry giants such as Intel and Microsoft. The same applies to the healthcare sector, where research and development has partly been replaced by search and development. Why reinvent a software wheel or a new drug when you can just buy the original inventor?

“Companies should look at their USPs when considering potential buyers,” says Byrne. “If a logistics company is strong technologically it could be seen as a technology play by potential buyers. This could widen the market for the company and increase the profit multiple payable. Digital capability is a key driver of deals globally.”

“High employment rates and competition among employers, especially for tech talent, coupled with tech start-ups putting increased pressure on old business models is leading to companies using M&A as the fastest means to acquire talent and IP to drive and supplement their own strategies,” McFayden adds.

The onward march of private equity

It is not all that long ago that a private equity buyer would have been about as welcome as a vulture fund, such was their demand for high returns over short timescales. Things have changed greatly, however. Private equity funds are increasingly looking at longer-term plays and are now in the business of building businesses.

“There is so much private equity capital chasing M&A deals, these funds are now outbidding trade players in some cases and also taking public companies private at a premium to deploy capital and acquire companies,” says McFayden.

That offers significant benefits to Irish business owners considering a sale, according to Byrne. “This is broadening their horizons. Irish sellers who thought they could only sell to trade buyers have more options now.”