Damo’s duets: with a little help from his friends 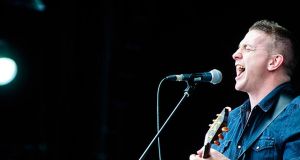 The man from Donaghmede has forged his own singular path to stardom over the past 20 years, and along the way he’s teamed up with many of pop’s most respected artists. The guest list on his albums reads like a who’s who of singing and songwriting legends, and it’s no surprise to hear he’s planning an album of duets for release sometime this year.

A Damien Dempsey gig is always worth your time, and there’ll inevitably be a surprise moment when some musical legend or other will join him onstage for a duet. He’s that kind of guy. Here are just a few of the famous friends Damo has gathered over his brilliant career.

O’Connor was one of the first to spot Damo’s talent, after hearing his debut album, They Don’t Teach this Shit in School, and she invited him to support her on tour. “I think he represents the sort of voice in Ireland that is not allowed to be heard,” she said at the time. O’Connor featured on the title track of Dempsey’s 2002 Negative Vibes EP, and she also duetted with Damo on Fire in the Glen, from his 2012 album Almighty Love. In between she’s performed with Dempsey on many a live outing, and the pair do a cracking version of Fairytale of New York. But Damo is most excited about hearing her sing one of his own songs on his forthcoming duets album.

The former Smiths singer was so impressed by Dempsey’s unvarnished style that he invited the Dubliner to support him on tour, and also signed him to his label Attack for the US market. While Damo’s social conscience has always been clear, Morrissey has courted controversy with some decidedly dodgy political views. Still, we’re looking forward to hearing Damo and the Mozzer together on Dempsey’s upcoming duets album.

The US singer-songwriter is a no-holds-barred kind of artist, and he’s also a big Damo fan. “I think he’s got one of the best voices in the whole damn world,” he told the Irish News. “His stuff just cuts me to the core and gets through all my defence mechanisms and I’m able to even cry once in a while listening to his stuff.” You can hear Grant and Dempsey on a track called You Don’t Have To, in early 2017, on YouTube. Grant commands a huge fanbase in Ireland, and his kudos here will go up several notches if his planned appearance on Dempsey’s duets album comes off.

It was at Brian Eno’s house, of all places, that Dempsey met Dido. “He had this little get-together where he puts a song up on the screen and we all get to sing harmonies. So Dido was there that night, and Annie Lennox was there. I nearly shat myself,” said Dempsey. When Dido professed her love for his song You’re Not on Your Own Tonight, Dempsey sent her a new song he’s written, Beside the Sea, and she duly lent her distinctive vocals to the track, which features on his current album, Soulsun.

When the Dubliners singer died in 2008, some of his final recordings were gathered together for the album The Last Session: A Fond Farewell. The album features a fine duet with Damo on the Pogues song A Rainy Night in Soho.

In what must be one of the greatest Donaghmede-Liberties team-ups, Damo and Imelda join vocal forces on the soulful Big Big Love, from the Soulsun album. The pair have performed together many times, and did a showstopping performance at 2016 Galway Arts Festival. Late last year, the Dub duo performed Big Big Love at the Royal Albert Hall, and the audience rattled their jewellery in approval.