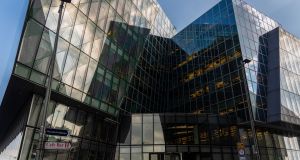 Facebook’s European headquarters in Dublin: Not alone do US multinationals seek out top-quality accommodation, what they do in terms of fit-out, others follow. ‘They set the bar very high.’ Photograph: Paulo Nunes dos Santos/Bloomberg

In fact, about 40 per cent of all office-leasing activity in Dublin comes from US multinationals. “Thanks to big-ticket deals by the likes of Facebook, Twitter and LinkedIn, last year that figure rose to 60 per cent , so the US is a huge driver of the market here,” says Marie Hunt, executive director and head of research at CBRE Ireland, part of the world’s largest commercial real estate services firm.

Not alone do US multinationals seek out top-quality accommodation, what they do in terms of fit-out, others follow. “They set the bar very high,” she says.

Most choose to lease rather than buy, apart from Google. “For a lot of US companies, the cost of rent isn’t the primary driver. It may be the 12.5 per cent corporate tax rate and the fact that a lot of them have to have a European base, so they tend to locate their EMEA HQs here. The fact that we are euro-denominated helps too.”

How these major multinationals select a location varies, but not by much. “They all have the same criteria when it comes to choosing a building, they just rank them in different ways. Some are more cost-conscious, so for those rent might be a priority. A lot like to be in the city centre as much as possible. With unemployment at just under 5 per cent, getting access to the greatest talent pool and transport links is a key consideration. They also like to be beside their competitors,” says Hunt.

Access to labour is, however, the primary driver. “If you are trying to win these companies away to the regions, to cities like Galway and Limerick, the first thing they will ask is ‘What are the universities like there, what graduates are coming out?’” she says.

US multinationals will choose Ireland for many different reasons but they each have one thing in common, “a desire to succeed in a business-friendly European gateway that’s great for business and great for living”, says Anna Scally, partner and fintech lead at KPMG Ireland.

“What they should look for in any town or city will depend a lot on their area of activity but three key considerations regardless of sector are access to talent, access to infrastructure and having the right environment in terms of tax and other supports for business growth.”

Ireland’s pro-business environment, and the fact it has universities and tech institutions spread throughout the country, means “talent is available nationwide”, says Scally.

“For such a small island, it’s testament to how well we are already doing in terms of attracting FDI that we have such a number of international airports. So whether it’s access for people, or to move goods, no matter where a business is in Ireland, there is close connectivity to the rest of the world.”

Staff wellbeing and the ability to create a sense of community for staff is important too.

“This seems to be an ever-growing and popular topic on the agenda for companies,” says marketing executive Paul Byrne of Dublin Airport Central, the major new commercial property campus at Dublin Airport.

“In order to attract and indeed retain the best staff in a competitive market such as Ireland, the same queries are popping up such as ‘What can my staff eat here? Are there onsite facilities for fitness? Where can my staff go for a coffee and a meeting out of the office?’” he says.

Dublin Airport Central delivers a “plug-and-play solution” in this respect, “with onsite swimming pools, gyms, an onsite golf driving range, astro football pitches, we even have a bowling alley on campus,” Byrne says.

It has a new 1.25-acre green space for yoga, food fairs and other showcase events. In addition to this, Dublin Airport Central organises regular 5k runs for its client companies.

Transport connectivity is another major bonus here, from buses to airbuses. “As Dublin Airport has the benefit of US pre-clearance, you can travel in and out of Dublin from the all over the USA daily, then jump on a plane to almost anywhere in Europe for meetings before heading back to your EU hub here at Dublin Airport Central,” he says.

The airport campus also offers that all-important ‘room to grow’. “As companies land in Ireland to test the market they initially only have small space requirements as their operation teams need to set up shop, start to recruit and ensure this market meets their corporate needs,” says Byrne.

“Then they need to secure longer terms and larger space. Dublin Airport Central allows for this. Whether you need a small space initially as you set up or you need a large space for 500-1,000 people for a full EU HQ, we can cater for every need.”

A masterclass in office design

How an office building is fitted out has a bearing on everything from property costs to productivity. As a major US multinational itself, what commercial property services specialist CBRE has done with its Irish office on Burlington Road in Dublin 4 is a good example of best-in-class interiors.

For a start, it’s entirely open-plan. “The days of the 40-office building are gone,” says architect Murray Osborne, director of CBRE’s building consultancy department. At CBRE Ireland, only the managing director has an office – and it is a small one, glazed on two sides.

Everyone else is accommodated on a first-come, first-served basis at seats, desks, quiet spaces and online-bookable conference rooms around the building. Working from home is actively encouraged at least one day a week.

The company uses Burlington Road to showcase its fit-out services to clients, who are immediately taken by how much cheaper such a building is to fit out – no more 40 offices to build and no more 40 individual air-conditioning units to install, for a start, points out Osborne.

It is also conducive to a much more collegiate atmosphere, breaking down the traditional departmental silos found in older buildings, and so helping to build networks and cross-fertilise ideas. “It’s all about being agile,” he says.

The business has gone completely paperless, which has cut down on the acres of space traditionally taken up by lever arch folders and filing cabinets – “it all adds up”, says Osborne.

All staff members get a laptop and a portable ‘hotbox’ storage solution they can bring with them to any desk. It works because, with people out at meetings or flex-working from home and elsewhere, most offices operate at an occupancy rate of 72 per cent in any case, so it makes sense to have a fit-out that reflects that fact.

The Irish office’s refurbishment was the 70th CBRE office worldwide to get the new “CBRE 360” look, as it is called. The response has been overwhelmingly positive. “People love it,” says Osborne.

Building on a successful relationship

Last year, it completed one of its most ambitious US FDI-related projects – the building of One Microsoft Place in Dublin’s Leopardstown. “We are particularly proud of this large, complex and intelligent project and more than happy to be awarded Project of the Year at the 2019 Irish Construction Excellence Awards,” says Theo Cullinane, BAM’s chief executive.

Complete with an LED waterfall, a digital lake and a DreamSpace (a learning hub for secondary school students), the building puts a sustainable environment at the forefront.

On the roof, visitors will find bee hives for cultivating honey, rain water collectors collecting water for use throughout the building, and a garden growing spices and food items for use in the staff kitchens.

BAM is proud too to have been a preferred contractor at a leading microchip manufacturing facility in Leixlip since 1989 – a continuous involvement for more than 30 years. It recently completed phase one of Cork city centre’s largest office scheme at Navigation Square comprising of 14,000sq m. The seven-storey facility, complete with a double basement, contains four office blocks and is Gold LEED certified, the US gold standard for sustainability.

“These high-performance multinationals have become best-in-class at continually setting and achieving the highest standards while maintaining a forensic attention to detail,” says Cullinane.

“BAM has grown together with so many of our US partners over the years and has itself been pushing out the boundaries of innovation and digital construction to enable it to continuously meet these exacting standards.”