Lights can be responsible for 40% of a building’s electricity use yet they can be left on unnecessarily in meeting rooms, storage areas and corridors

Tim O'Brien
Brought to you by The Irish Times Content Studio 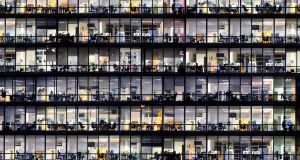 There are many things your business can do to radically reduce energy consumption – and bills. Even small moves like moving to energy efficient LED lighting can reduce the energy used to light your business by up to 80 per cent.

According to Jim Gannon, CEO of the Sustainable Energy Authority of Ireland, with the right approach small businesses can “control their energy use, improve their profit margin and become greener too”.

Gannon recommends the SME Guide to Energy Efficiency as a useful starting point for small businesses wanting to transition to a lower carbon and cheaper future. It points out that for a company with a 5 per cent profit margin over three years, a €500-a-year saving from energy efficiency makes the same profit as €30,000 of extra sales.

The guide also looks at how to engage the workforce, how to identify energy-saving opportunities and how to source funding for making improvements.

One of the easiest things to do is to check your thermostats are set for the right dates and times. Up to 30 per cent of heating costs can be saved by preventing cold air entering a building, so controlling how doors and windows operate is one of the simplest ways to reduce energy bills.

Lighting can be responsible for up to 40 per cent of a building’s electricity use. Lights are very often left on in meeting rooms, storage areas and corridors where they are not needed and nobody is responsible for turning them off. Better to install timer switches to make sure lights are turned off outside working hours. Timers are easy to install and are very low cost – they can pay back within a matter of months.

Do an audit of the machines in your office and check their energy consumption. Computers, printers and kitchen utilities can be big energy users. The SEAI says 46per cent of electricity in businesses is used outside of standard operating hours, so whether it is leaving on monitors or vending machines keeping things unnecessarily cool at night, it pays to pay attention.

“There are many energy providers which will work with business to do an energy audit and make recommendations on how energy demand might be reduced.In lighting, for example, Energia runs a scheme which in which it will identify annual savings for businesses and design the most energy-efficient lighting solution.

Energia will also pay for the supply and installation of quality LED lights and businesses benefit from new lights, reduced bills and a smaller carbon footprint over a fixed term contract. Of course the savings are still there for the business to enjoy after the contract ends.

Buildings of the future will be a lot more energy efficient and the changeover is already under way .

Near Zero Energy Buildings, or NZEB in the jargon-filled world of climate change response, is a level of energy efficiency that will apply to all new buildings occupied after December 31st, 2020. For publicly-owned buildings the “near zero” standard already applies to all new buildings.

However, it is not as fearful as it sounds. Nearly zero simply means a very high energy performance or a very low amount of energy required for the heat, services and lighting. This can be significantly helped by using a renewable energy sources or sources, including energy produced on-site or nearby.

If that still sounds complex some of the older buildings that have already made the transition may be a surprise.

The National Gallery of Ireland, housed in an historic listed building on Merrion Square, Dublin, that dates from 1864, might be expected to devour large and ongoing supplies of fossil fuels. However, the refurbishment of the gallery provided the opportunity to retrofit key renewable energy services.

The work involved the addition of air conditioning, carefully integrated into the building’s services, micro-louvered glazing to reduce heat gain, a new combined heat and power unit, heat recovery, LED lighting and the building is now a net exporter to other newer parts of the gallery on Clare Street.

According to a citation for the SEAI Energy Awards 2018: “The project shows that the energy strategies used in old buildings can outperform many newly-constructed facilities through the use of innovative design and careful control methods.”

Another noted performer in reducing to low carbon was Dún Laoghaire-Rathdown County Council, which aims to be carbon neutral by energy future proofing everything it does. The plan is to reduce fossil fuel dependency by energy efficient design and promoting low-energy buildings.

The council’s exemplar housing scheme at George’s Place, Dún Laoghaire, is built to the highest environmental standards with low running costs for tenants. The high quality energy efficient homes achieved the highest A1 Building Energy Rating (BER) and it was all down to design.

An award winner in the development of privately-owned buildings is the supermarket chain Lidl, which is rolling out a plan to retrofit solar panels to existing stores to generate energy and even give it away free through electric vehicle charging stations. With almost 200 sites in Ireland the move will significantly lower the chain’s carbon footprint, electricity bills and supports the decarbonisation of transport.

So whether you are a SME or a major international supermarket chain, there are steps that can be taken to respond to climate change in a practical cash-saving way.