Ireland has big ambitions for its waste-to-energy facilities, with planned new plants around the country moving us ever closer to self-sufficiency 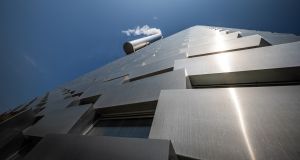 Copenhagen’s waste-to-energy facility is located in the centre of the city. Photograph: iStock

The global waste-to-energy market was valued at more than $17 billion in 2017 and is projected to reach $27.7 billion in 2025, growing at a compound rate of 6.1 per cent between now and 2025, according to international market research and advisory company Allied Market Research.

Waste-to-energy plants generally utilise residual municipal waste, the waste that can’t be recycled or used for other purposes such as composting, as a fuel. The attraction of such plants is not only the energy they produce but their contribution to the reduction in the amount of waste destined for landfill, with a consequent cut in greenhouse gas emissions.

There are currently thousands of such plants operating around the world, with more than 450 of them in Europe. The leading companies in the industry include Suez Environment, C&G Environmental Protection Holdings, Babcock & Wilcox Enterprises, and Covanta Energy Corporation, which owns and operates the Dublin Waste-to-Energy plant in Ringsend.

“The waste-to-energy industry makes a major contribution to the circular economy,” says Dublin Waste-to-Energy project director Kieran Mullins. “It deals with residual waste, waste that can’t be recycled or be put to another useful purpose and is a source of sustainable energy for Europe. It contributes 1.5 per cent of energy used in Europe. Instead of putting waste into landfill or exporting it, we are recovering energy from it. We produce some CO2 but that is 30 times less harmful than the methane-produced landfill when it comes to the greenhouse effect.”

The strong safety record of such facilities is indicated by the presence of one in the centre of Vienna, while another has been built quite recently in the middle of Copenhagen. Indeed, such municipal facilities are commonplace throughout Europe and much of the developed world, where they arouse little in public comment.

The Copenhagen plant is an interesting case in point. Built at a cost of about €600 million, the plant burns 400,000 tonnes of municipal waste annually. The plant generates up to 63mw electricity and 157-247mw in district heating, depending on heat demand and the price offered by the grid for power.

A particular design feature is the 85m-tall, sloped roof which is used by locals as an artificial ski slope, hiking slope and climbing wall.

“The plants are well-established in cities,” says Mullins. “A lot of them are used for district heating services, particularly in northern Europe. This plant is district heating-enabled and we will do that once the infrastructure is put in place by Dublin City Council. ”

It is expected that Dublin City Council will invite tenders for the construction of the district heating system towards the end of this year or early next year. The system will provide heat to the new development planned for the former Irish Glass Bottle site in Ringsend as well as for homes and premises on both sides of the Liffey quays.

“The plant here is 33 per cent energy-efficient at the moment and that will rise to 88 per cent once the district heating comes online,” Mullins adds. “At present, the plant generates 62mw of power to the national grid, enough to supply 100,000 homes. The plant was designed to be dual-purpose so must await the district-heating infrastructure before it can achieve greater efficiency. We are taking 600,000 tonnes of residual municipal waste every year. That’s black bin waste mainly from the Dublin region.

“That’s not just diverting from landfill. Ireland was exporting 600,000 tonnes of waste annually up until 2015, that’s now down to 320,000 tonnes. We have accounted for a big chunk of that reduction. Taking nearly a third of the country’s residual waste and reducing the amount going to landfill and export.”

At present, the Dublin Waste-to-Energy plant processes 600,000 tonnes of residual waste annually while the Indaver plant in Meath accounts for a further 200,000, with the cement industry taking up another 250,000. Covanta has an application to process an additional 90,000 tonnes of waste annually while Indaver has sought permission for a new 240,000-tonne-capacity plant in Cork. That would bring Ireland’s total waste-to-energy capacity up to almost 1.4 million tonnes, not far off the 1.8 million needed for self-sufficiency.