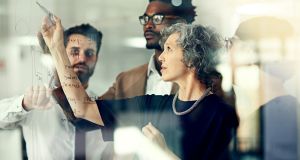 Diversity is about having people from different backgrounds, including genders, ethnicities and beliefs

That’s a fact that Jess McNicholas, managing director inclusion, diversity and corporate citizenship in State Street, a financial services firm, is acutely aware of. And the clue is in the title.

“I’m responsible for both diversity and inclusiveness. In the past, it used to be diversity alone. But we realised that you can have as diverse a workforce as you like, but if you don’t have an inclusive environment or workplace, you’re not getting the benefits of that diversity,” she says.

Fittingly, diversity comes in many guises. “It’s about having people from different backgrounds, including genders, ethnicities and beliefs. But you have to ensure that you have an inclusive environment where these differences are not just present, but are respected and valued. It’s about everybody bringing their differences to the table, and being listened to and respected.”

It includes personality types too. “If you’ve got a table full of only extroverts, you’ll find an awful lot or talking but maybe not so much getting done,” she points out. “Equally, deep thinkers and quick thinkers will look at things differently and perhaps come to different conclusions, what you want is both perspectives,” she says.

It also includes experience and training. For example, a chemical engineer will approach a problem with a different mindset and methodology to someone with a degree in economics.

“What you want is both views,” she says. “Diversity allows you look at a problem through a number of different lenses, so that every type of solution will be thrashed out. It also eliminates ‘group think’ situations.”

This opens up opportunities for people from all kinds of backgrounds to get into all kinds of work that traditionally would have been closed to them. “It’s breaking down that myth that you have to have a financial services degree to work in a bank, for example,” she says. “It’s about being lean, adaptable and agile. That’s who we are as a business and innovation is a key driver of that.”

In a fast changing world, where “disruptive innovation” is transforming entire industries, diversity has a key role to play. “In the past organisations were led by people who created the culture and got the people in who followed the culture,” says John Ryan, chief executive of Great Place to Work, an awards based best practice benchmarking initiative.

Employers were told of the need to have more diversity in their organisations, and they “took that on board and did it”, he says. There’s just one problem: “They all think the same way.

“Organisations still don’t have a cognitive diversity. And the reason why is because it’s hard to manage people that are different to you, who are not similar to you.”

Engaging with difference is more difficult than engaging with similarity. “If you meet people who have a completely different value set and culture to you, that can be hard. In life we value similarities. When we talk of how, in relationships, we meet people we just “click” with, it’s because there is no cognitive dissonance there,” he says.

Old style leadership was all about “finding a lot of people like you, and saying we all agree this is crap, I’ve an idea how to change it, come with me”, he says. The challenge for leaders now is that companies need innovation to compete and, in a global market, also need their workforce to be fully reflective of their customer base. Inclusive diversity can deliver both.

“You really need people who are different to you but that’s very hard to lead,” says Ryan. “It’s much harder to lead people who challenge everything you hold dear. But with globalisation, where organisations are working 24/7 around the globe, you have to embrace people from different cultures and nationalities.”

Digging deeper to find other kinds of diversity will bear fruit too, says Ryan, pointing to tech firms that have introduced a policy of actively recruiting people with autism by way of example.

There is indeed a far greater understanding among employers of the need for diversity in organisations, agrees Conor McClafferty, partner at Merc Partners, an executive search firm.

“But if you look at it as a numbers game, or on the basis of quotas, you have a problem. It must be looked on as something the organisation will benefit from, and with an understanding that it doesn’t just mean gender or ethnicity but diversity of thought, of experience and of perspective too,” he says.

The arguments in its favour are equally compelling at every pay grade too. “If your organisation doesn’t want that level of challenge in the board room, at executive level, and all the way down through the ranks, you are missing out, and you are missing out on top talent. Companies with skills shortages are often shown to be those that have gaps in relation to women and minorities, for example,” he points out.

Even leaving aside any sense of fair play, the business case alone is compelling. “It is estimated that 80 per cent of consumer purchasing in the UK is done by women, for example,” says McClafferty. “And gay men and women have 80 per cent higher than average household incomes on average. It’s the smart strategic thing to do, as well as the right thing. And if you have group think as an organisation, you are not going to develop.”

It’s not about pretending that people don’t have biases, conscious or unconscious, he points out. “But if you don’t have the structures in place to challenge that, your workplace diversity is just window dressing,” says McClafferty.

Or, as John Ryan of Great Place to Work puts it: “Diversity is being invited to the party. Inclusivity is being asked to dance.”