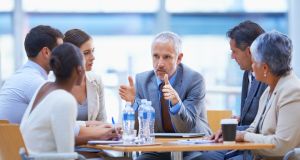 Firms note a number of benefits from having strong and considered diversity policies, including employees having a greater sense of loyalty and dedication to their job. Photograph: iStock

Inclusivity in the workplace has never been more significant – as Ireland reaches almost full employment, it is essential in attracting and keeping skilled employees. In fact, 81 per cent of companies have experienced a skills shortage in the last year, according to CIPD, the organisation for HR professionals. In that context, there is more pressure on organisations to retain staff as well as being attractive to a wider group of people, Mary Connaughton, director CIPD Ireland, says.

“That’s a key driver and there is necessity in it. To compete in the talent market, we need to get our act together. There is an awareness we need to better reflect who we serve also. It’s also acknowledged that we’ll make better decisions if we have diversity in-house – people who can bring their insight to business decisions. Better decisions are made when more voices are in the room.”

Companies are coming at the problem from a range of angles, Dr Kara McGann, senior labour market policy executive at IBEC, says.

“For some, it’s looking at their own workforce population and asking, do we have a diverse population that reflects our customer base and if not, why not. They are asking: are we losing employees at different levels and if so, why is that happening. They are looking at their policies – their work-life balance and asking, what do they need to feel more supported and involved.”

Firms note a number of benefits from having strong and considered diversity policies, including employees having a greater sense of loyalty and dedication to their job, according to Graeme McQueen, head of public affairs at Dublin Chamber of Commerce.

“Other benefits include reduced absenteeism, lower levels of employee turnover and increased client loyalty. Having a diversity focus can also reflect well on a company’s brand. These benefits are increasingly important for SMEs and provide a good way for owner-managers to motivate staff.”

He says this is useful given that it can often be difficult for smaller firms to pay high salaries or offer financial rewards.

“Salary and perks will always be a big sway for employees, but other factors are becoming increasingly important. People increasingly want to work for a company they believe in and that they respect. I only see this trend increasing over the next few years as the battle for talent intensifies.”

He says being viewed as “very progressive” internationally when it comes to diversity is a “huge feather in our cap” in attracting FDI and the best staff to Ireland.

Most organisations now resource and fund networks or affinity groups for women, LGBT or ethnic groups, among others.

Moninne Griffith, executive director at BeLonG To, says that as a lesbian woman, she could never have envisaged the levels of inclusivity that are commonplace now.

“As someone who has worked for the last 10 years for LGBT rights, this is a new wave of ensuring people can be themselves, bringing their ‘whole selves’ to work and can talk about their families and their weekends over coffee in the canteen.”

Several sectors are investing heavily in networks which offer peer support in order to empower “out groups”.

“There were these old boy’s networks where men of a certain class, who went to a certain school, would play golf and they all had that informal peer support. This is being replicated in those networks. People feel welcomed and that they belong and it’s about mentoring and sharing of best practice,” Griffith says.

“In a lot of businesses they are seeing that they have to provide this if they want a happy, productive workforce and to also recruit and retain the best staff. It also gives them an edge with customers. If they are winning awards for diversity and inclusion, clients like that – as well as it being the right thing to do.

“A diverse team also means less groupthink and in the financial sector we need less of that. We need people to approach problems and challenges differently so we can avoid things like the banking crisis from happening again,” she adds.

Connaughton says organisations often pick a strand of diversity to work on.

Last year, ESB won the CIPD HR award for diversity in the workplace – for its work in encouraging more women into engineering roles. This year, Dublin Bus won the award for a transgender initiative it had rolled out. It has also put resources into race and ethnicity groups.

Firms like Vodafone have focused strongly on improving working conditions for female employees, according to McQueen.

“They’ve done things like introduce a four-day working week for six months, on full pay, for mothers returning after maternity leave. It’s obviously much easier for larger firms to introduce policies like this, but we see SMEs increasingly trying to do more in the area of diversity too,” he says.

While Dublin Bus is making strides in the area of transgender inclusivity, Griffith says it is still “really tough for transgender people to come out in workplace”.

“The numbers who are unemployed is very high because a lot of them are worried about going for job interviews and how they might be perceived. The notable exception is Sara Phillips, chair of the Trans Equality Network – she works in a very senior managerial role at a multinational construction company.”

But some groups feel more welcomed and included than others.

Sarah Lennon, communications manager with Inclusion Ireland, says only 36 per cent of people with disabilities of working age are in employment, compared to 73 per cent of the general population.

“The numbers stayed stagnant during the recession and now that we are told we are moving towards full employment, the figures aren’t improving. The downturn didn’t affect them but they were at a low base to begin with,” she says.

“Tertiary education is very difficult. People are in receipt of a social-welfare payment from a very young age, and there is very little expectation of them to go out and work and that can be very difficult to overcome and people internalise that. It’s important from a poverty perspective that people access work. People with disability are far more likely to be experiencing poverty, pretty much more than any other group, with the exception of lone parents,” she says.

“We need to encourage companies in terms of access programmes. A big fear for people is losing things like a medical card or a free travel pass when they take an entry level job and a lot of the time it’s not worth it for people to go to work. That’s something the Government is looking at with its Make Work Pay programme – for people to retain those secondary benefits for a number of years while they get into the workforce.”

Hiring for diversity ultimately means little unless every employee comes through the front door feeling they have a voice the organisation values and listens to, John Ryan, chief executive of Great Place to Work says.

“A D&I initiative will be nothing more than a quota exercise if you ignore your employees’ opinions and feedback. The organisations we look at who have really benefited from these initiatives are the ones who put processes in place to capture the variety of perspectives and opinions in their workplace. One-to-one meetings, town halls, upward feedback mechanisms, and processes that show that all this is being heard and acted upon – these are the means that turn a good D&I strategy into a great one,” he says.

Preparing for an entirely new world

Bringing the benefits of eye-care to vulnerable children

The right formula for a great workplace

Remote control: Getting to grips with the new world of work

How to manage company conflicts

Left to your own devices: Gadgets for remote working