With contractions looming, car makers are rethinking their manufacturing processes 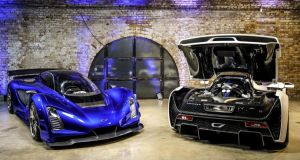 The Czinger 21C, which has a largely 3D-printed chassis, boasts 1,250hp to drive its featherweight 1,250kg weight.

With much of the world’s population stuck indoors, and the spectre of a major global recession on the horizon, the launch of the Czinger 21C supercar in March could come to be seen as the final high watermark of motoring excess.

Presented in London just before the lockdown, the Czinger 21C is in many ways a classically insane supercar. Designed to be super-lightweight, and with driver and passenger sitting one behind the other – as in a fighter jet – it boasts 1,250hp to drive its featherweight 1,250kg weight along.

Only 80 were due to be built, and even that now seem unlikely to ever be fulfilled, but the Czinger, as well as being seen as the worst-timed supercar ever, might also be a harbinger of something new for the motor industry. It’s the first 3D-printed car.

Well, not entirely, but the Czinger’s chassis is largely 3D-printed, or ‘additively manufactured’ as the more technically correct phrase might be. By adding microscopic layer upon microscopic layer of material, instead of forming metal in a press, or shaping carbon-fibre in a mould, Czinger says it is able to make a chassis that’s both exceptionally strong and exceptionally light. In fact, the 21C’s chassis, minus engine and trim, weighs just 120kg.

The 3D printing techniques used also mean items such as air inlets and cooling channels can be built into the design of the chassis, rather than being cut in at a later stage, saving further weight and complication.

Now, that’s all well and good for a multimillion-dollar hypercar, but the much more interesting thing is that 3D printing has the potential, if it can be sufficiently scaled up, to revolutionise the way in which cars are built. It could make manufacturing cars more efficient, less environmentally harmful, faster and cheaper. It could also, following Czinger’s lead, give us lighter cars that are therefore cheaper to run and, again, less environmentally troubling. It’s a big if, though.

Thus far, 3D printing has been used for only small components, where its ability to produce light-but-strong designs has been a boon. BMW used 3D printing for a crucial bracket for the folding roof of the i8 Roadster hybrid sports car, and it was a perfect encapsulation of how 3D printing can change the way in which components are made. Instead of a big hinge, it was a spoon shape, made of a lattice of gossamer-light aluminium strands. It looked like the foot bones of some futuristic, robotic dinosaur and weighed hardly anything in your hand. If it hadn’t been made of metal, you’d have sworn it was organic, not mechanical.

That process is now expanding to larger, more critical mechanical components. Honda has recently teamed up with software company Autodesk to redesign and 3D-print a crankshaft component to make it 50 per cent lighter and more fuel-efficient, as part of an overall strategy to reduce the impact of the Japanese automaker’s vehicles on the environment using smart design and advanced manufacturing processes. Crankshafts and the parts associated with them are heavy-duty mechanical components, subject to high stress loadings, so that shows that 3D printing has moved on from making small, delicate parts.

Seat has also got in on the 3D printing game. It’s using the technology to make parts for a racing car based on the new Leon hatchback. “For the new Cupra Leon Competición, we modelled the steering wheel’s centre control module, the bonnet air vents, door mirrors and the brake and water-cooling inlets,” explains Xavi Serra, head of technical development at Cupra Racing.

“The main goal is to have a lot of parts in a short time. We can quickly test a wide variety of designs and furthermore, since vehicle development is now done in parallel, this technology enables us to react swiftly to any changes in the design process.”

Can the major car makers follow Czinger’s lead and start 3D-printing bigger parts, even entire car chassis, to streamline the production process? Sadly, for now, the answer seems to be no. Or at least not yet.

“Volkswagen plans to print structural car parts – up to 100,000 units per year – using HP’s Metal Jet technology on a relatively mass scale as soon as 2021. Despite the claim, it is not clear whether this project is more economical in practice. Another technology of interest is Desktop Metal’s metal binder-jetting. The company claims its production system can achieve 20 times lower cost per part, and it targets high-volume, small-part production applications in industries including automotive, but it is limited in terms of available materials for now,” says Lux Research analyst Dr Xiao Zhong.

“It is possible to print structural parts in a medium to large scale in the next five to 10 years with some of these technologies, and binder-jetting is likely the one [that] gets there first. We are still far away from printing an entire car chassis, not to mention on a large scale. It is for luxury cars and not about scale production. Moreover, vehicle design is a systems-engineering task, which means the chassis not only has to be redesigned for 3D printing, but also has to accommodate all the relevant parts and function effectively in a road-ready mode. At this point, it is probably over a decade away.”

Prof Denis Dowling, director of the I-Form Advanced Manufacturing Research Centre at University College Dublin, agrees with that assessment. “3D printing is still in its infancy as a manufacturing process and, due to uncertainty around its future, market leaders seem hesitant to heavily invest in it right now. The technology has developed considerably in the past decade and it is beginning to show itself as a potential competitor to traditional manufacturing.

“For now, 3D printing will continue to suffice as a useful tool for the automotive industry to trial new concepts, iterate design features and create unique, personalised parts for a small number of customers,” Dowling continues. “3D printing in the automotive market is expected to steadily grow in revenue from $2 billion to over $12 billion by 2028. This is as a result of more manufacturers adopting 3D printing to design parts, functional prototypes and tools. It seems that rather than 3D printing suddenly taking over current manufacturing techniques, that it will instead continue to creep into production lines over time. This has already begun by manufacturers taking advantage of the technologies ability to produce highly detailed, complex parts, as well as its potential for small-batch customisability.”

Nonetheless, something has to change. Gordon Murray, designer of the legendary McLaren F1 supercar, says the days of the stamped-steel car are coming to an end. “I think we have reached a tipping point with stamped-steel bodies, and for lots of reasons that have all come together in the last few years. One of them is the inflexibility of the architecture, because there are typically 300-350 panels that make up a modern car and the tooling for that is horrendous – in terms of time, of energy and in commercial cost. And it’s heavy. And then there’s the energy cost pick-up, and that’s not going to go back the other way, obviously. And on top of that we have a downturn in the economy and the buying public are very fickle.

“So rather than try and adapt a stamped-steel car, and make them more flexible, why don’t we just start again?” Murray asks. “From my point of view, I could see how we are just going to have to change the way we think about designing cars, buying cars and using cars if we want to maintain our personal mobility, our freedom.”