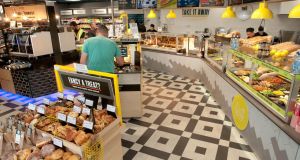 While the local corner store now stocks items from around the globe, there is also an emphasis on keeping it local and providing fresh produce that has been grown locally.

Fewer and more are the two words that tell the story of developments within the Irish convenience-store sector in recent decades: the number of independent food retailers has fallen dramatically, but those that survive and thrive are offering their customers much more than ever before.

The range of fresh and frozen foods offered in small local supermarkets today is extraordinary, given that what was available in the local corner shop in our parents’ time mostly came in a tin. Added to the grocery shop, these stores now also offer freshly brewed coffee, mobile phone top-ups, cash dispensers, bill-payment facilities, lunch counters and ready meals.

But this increased offer has been at a cost. “There has been a lot of amalgamation. Where once a town would have had a butcher, a baker, a dairy and individual shops selling individual types of product, now the convenience provides all those functions,” says Tara Buckley, director general of RGData, the representative association for Ireland’s independent family-owned grocery shops, convenience stores, forecourt stores and supermarkets. Founded just over 75 years ago, the Retail Grocery Dairy & Allied Trades Association once had more than 13,500 members – today RGData’s members number just over 4,000.

A big change over the years is that most independent convenience stores and supermarkets have joined together in buying groups. “Ninety per cent of my members are the Centras, the Spars, the XLs, the Londises, the Maces, the SuperValus,” says Buckley. “They have had to join the buying groups for economies of scale because their main competitors, Tesco, Lidl and Aldi, are very big companies with huge buying power. Plus the way distribution works has completely changed – manufacturers and suppliers deliver to centralised warehouses now, they don’t send a truck out delivering soap powder to each and every store.”

Ireland’s biggest private-sector employer, Musgrave, owns several of these buying groups, such as SuperValu, Centra, Mace and Daybreak, and through these it partners with more than 1,400 independent retailers. Other big players are Spar, which has some 370 members trading under the Spar and Spar Express brands; BWG, which owns the Eurospar brand, and Gala, which has almost 200 members.

“There is a lot of consolidation going on in all sectors at the moment,” says Lorraine Higgins, deputy chief executive of Retail Excellence, Ireland’s largest retail trade body, with members including multinationals drawn from across the retail spectrum. “We have seen seismic, but positive, change as a result of this, particularly in pharmacy, where many have embraced the growing demand by millennials for beauty products. This has led to the establishment of consumer loyalty at an early age: while these customers might not yet require prescription medicines, they will be sure to return to the place they know best.”

In the convenience sector, there are some other very noticeable trends: the coffee machine is almost ubiquitous, there is much more fresh food on display and more engagement with consumers.

“The convenience shopper has become more foodie and health-conscious and with an appetite for high-quality coffee on the go,” says Musgrave corporate communications manager Julie Dorel. “To respond to the first of these trends, we launched our ‘Live Every Day’ programme two years ago providing healthier choices. In the past year, sales of our Grab & Go healthy sandwich range rose sharply by 24 per cent and sales of salad boxes rose to almost €2 million.”

And while the local corner store now stocks items from around the globe – quinoa, chia seeds and manuka honey, for example – there is also an emphasis on keeping it local and providing fresh produce that has been grown locally.

“Every store has top FMCG brands piled high in every aisle – and so it should, but they shouldn’t ignore Farmer John down the road who wants you to stock his homemade jam, or any other local business for that matter,” says Tina Twohig, Ireland country manager for YourCash, a supplier of in-store ATM machines.

In a YourCash compilation of tips to increase customer footfall, the firm also recommends that retailers maintain their stores well. “It’s obvious to most shop owners that grubbiness is going to put people off buying anything, but some don’t realise that more is needed than a quick dust around the custard creams,” Twohig adds.

Another tip is to always have at least one special offer on prominent display. “Don’t just discount stock that is slow selling or expiring sooner than you’d like – although keep doing that! – also discount some key products directed straight at your customers. What gets people more excited than their favourite bar of chocolate at half price? That’s right – nothing! If you really want to step up your game, a small area dedicated to offers or €1 products usually goes down very well too!”

But of course, Twohig’s very top tip is that store owners should install ATMs on their premises. Earlier this year, YourCash purchased Ulster Bank’s network of some 400 EasyCash ATMs, with the result the company now has some 600 cash dispensers in Ireland, mostly in-store.

“A cash machine is a healthy investment for a shop, not only does it increase your footfall but it benefits your customers,” Twohig points out.

In the UK, 58 per cent of convenience stores have ATMs and despite the arrival of electronic payments, British and Irish people show a marked preference for cash payments. “There are plenty of benefits of having an ATM in your business,” says Twohig. “Customer convenience, increased footfall and a higher basket spend all make an ATM a great service to offer to consumers. What really seals the deal for most businesses is the chance to reduce their banking costs by recycling their cash in-store. Many YourCash customers say they save around 90 per cent on cash lodgement fees, which adds up to thousands of euro every year.”

But why, when an innovation such as a coffee machine or an ATM is introduced in one store, do they suddenly seem to appear in all stores?

“You can’t resist change: if you do, the likelihood of survival is minimal,” says Lorraine Higgins of Retail Excellence. “Retail has professionalised greatly in this country over the last 20 years. People at the top of their game are akin to sociologists. They analyse what consumers want and then they react accordingly. Also, as a consequence of the consolidation in various sectors, we have seen consistency in product offering, experience and standards in store.”

“Our business model is all about partnering for success,” says Musgrave’s Julie Dorel. “Whether it’s innovation from the top down or from the bottom up, it’s only by collaborating with our retail partners that we can make new products and services a success. In many areas, we take the lead. For example, SuperValu was the first retailer to introduce a fully transactional grocery app in Ireland. On the other hand, some of our retailers develop innovative features that go on to be adopted across our store network. For example, we are rolling out autism-friendly shopping evenings across SuperValu, having seen a number of individual retailers introduce them in response to community needs.”

Tara Buckley points out that RGData members are very keen to attend trade shows and events to keep up to date with the latest developments. “While online shopping isn’t as big a threat to convenience shops as other retail sectors, RGData members are using social media to engage with their customers – it’s very much clicks and bricks.

“A lot of our members have self-service checkouts, they have embraced tap-and-go payments and mobile phone payments. People forget that very often it is the small retailers who are the first movers – they have the agility, not the big multiples.

“But there is no doubt there are a lot of shoppers who still want a bit of interaction with the person at the checkout or the person serving them at the deli counter. People want a nice clean shop, with a good range of goods and a little bit of theatre. People also really like a shop that is friendly and where the staff talk to you.”