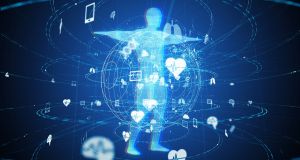 “If you have someone with a chronic disease, the wearable device can allow doctors to monitor their data feed continuously to see if something is happening that requires action.” Photograph: iStock

Ever since we first heard about the ‘internet of things’, we’ve been talking about smart fridges. But most of the benefits will – at least at first – be found in industry.

We are already seeing the rise of Industry 4.0, smart factories which are highly automated and ultra-efficient thanks to the use of narrowband IoT sensor technologies that tell machines what to do and when.

“What 5G will do is add another layer on top of the autonomous factory, creating the potential for mass production and extreme efficiencies,” says Debbie Power, IoT country manager for Vodafone Ireland.

Interest is strongest among Ireland’s manufacturing and healthcare sectors, helped by the presence of so many world-class medical device, med-tech and life sciences manufacturers here.

“We are also seeing particular applications in the healthcare sector for wearables,” says Power. These are medical devices which can monitor the wearer’s health, similar to the way Fitbit monitors our activity. They have a core role to play in preventative care models.

“If you have someone with a chronic disease, the wearable device can allow doctors to monitor their data feed continuously to see if something is happening that requires action. We are seeing companies developing just such solutions now that the 5G technology is there to facilitate them,” she says.

We are only at the earliest stage of envisaging what is possible, which is why 5G is best thought of as a platform for innovation.

“The patterns we are seeing here in relation to the internet of things are similar to those across the globe. 5G is what is bringing IoT to life.”

Both IoT and 5G technologies can deliver substantial value to enterprises when implemented together, says KPMG, a professional services firm.

“5G networks offer tremendous benefits to manufacturers in terms of data speed, latency, efficiency, reliability, capacity and security. The technology is designed to be fast and dependable as fibre optic cable and offers the same capacity at a lower cost, with more flexibility,” it says in a report, Converging 5G and IoT.

“5G will improve the delivery of mobile broadband services, in comparison with previous wireless technologies, and is expected to support a wide array of new solutions. Digital capabilities based on AI, autonomous operations, virtual reality and drones are among the solutions that will employ 5G networks to deliver big gains in productivity and accelerate innovation.”

There are already systems that help to integrate IoT devices into consolidated platforms, but 5G enables several use cases that were previously limited, due to lower throughput and performance, it says. In manufacturing, wireless technologies have played a limited role due to vibration, sound and heat, for example. 5G is expected to eliminate these issues.

That means workers equipped with augmented reality or virtual reality headsets are able to move freely about the factory floor, connected at all times to the 5G network.

“While interacting with IoT devices and data, they can simulate every process in three dimensions right up to the final product. Since even the smallest mistake in design or layout can be expensive, AR/VR’s ability to spot potential errors through simulations is just one of the valuable attributes of this system,” it says.

Vodafone Ireland’s roll-out of 5G is expected to be complete by 2020 and the company expects it to reach maturity in terms of adoption and usage by 2025.

The advent of broadband on the go, at advanced speeds and with low latency will give rise to such innovations as driverless cars and robotic arm control, says Kevin Curran, professor of cybersecurity at Ulster University.

The fact that 5G allows a business to divide off bandwidth to give to some devices, and not others, will also appeal – particularly as this “network slicing” has the capacity to improve connectivity and security in one step.

The convergence of 5G and IoT will, however, exponentially increase the amount of data generated – from a tap to a “fire hydrant” according to KPMG.

In relation to the risk of cybercrime, the introduction of 5G telecommunications, network slicing and new, secure software algorithms is expected to give manufacturers a “sizeable lead” over hackers and provide enterprises and their ecosystems with strong network security protocols, it says.

“5G technology, therefore, will offer a higher level of data security than that of existing telecommunications infrastructure. But, as always, there is no substitute for a carefully implemented cybersecurity governance programme to ensure sustainable communications throughout the ecosystem.”

That goes for householders too. “My only fears in relation to 5G and IoT-enabled smart homes is in relation to ransomware,” says Kevin Curran. He is referring to cyberattacks on laptops, PCs and networks which infects them with a virus that effectively closes them down unless a ransom is paid.

For consumers, it means ensuring not just your smart fridge but your electronic entry key pads, your digital thermostatic and your entire smart-controlled home is properly protected.

“You could conceivably have a malware attack in the future that means your whole house doesn’t work and you have to pay to get it all turned back on.”

Welcome to the 5G future: Here’s how the world is about to change

Fibre or 5G? A bit of both is best for rural broadband

Healthcare and surgery to be transformed by 5G

Smart Cities: How 5G is helping to make the urban connection