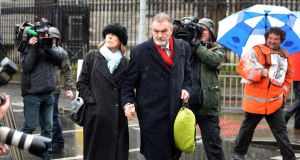 In a case likely to make headlines, Bailey has lodged his appeal against his much-publicised failed High Court civil action for damages over the conduct of the Garda investigation into the still unsolved murder of French film maker Sophie Toscan du Plantier in west Cork in 1996.

The appeal features in the Court of Appeal directions list for this month.

That court continues to try and reduce its inherited legacy of hundreds of unheard appeals from the Supreme Court’s backlog while also tackling hordes of new appeals descending on it. Litigants with non-urgent cases are likely to wait at least a year before their appeals are heard but the court’s procedures provide for speedy hearings of urgent matters.

Separately, the appeal court’s judgment on a €900,000 libel damages award to Martin McDonagh, Cranmore Drive, Sligo, over a 1999 Sunday World article describing him as a “Traveller drug king”, is particularly awaited in media circles. The appeal was heard on July 31st and judgment is expected in this court term.

Delays continue to plague the Supreme Court where there is a 4½-year wait for those with “legacy” appeals, those appeals not transferred to the Court of Appeal’s list on its establishment a year ago. In addition to several hundred legacy appeals, the Supreme Court must also deal with the new appeals coming into its list.

Waiting times for High Court cases are considerably less, ranging from three weeks to six months. The Commercial Court division of the High Court continues to fast-track big business cases where litigants can have their cases heard within a week in some cases or, in most cases, a matter of months.

O’Brien’s action against individual members of the Dáil Committee on Procedure and Privileges and the State was up for mention in the High Court on Wednesday, when the defence’s legal team successfully sought more time to prepare its case.

The case was initiated after his separate action brought against RTÉ aimed at preventing publication of a report concerning his personal banking arrangements with the State- owned IBRC. O’Brien has separately brought defamation proceedings against Post Publications Ltd, publisher of the Sunday Business Post.

The Quinn family’s action aimed at avoiding liability for €2.34 billion loans advanced by Anglo Irish Bank to Quinn companies was due for mention in the Commercial Court. The case, against Anglo’s successor, State-owned Irish Bank Resolution Corporation, began in 2012 but has been repeatedly delayed at the DPP’s request due to criminal proceedings against former executives and officials of the bank.

Both sides agreed in early summer to enter mediation and the Commercial Court may be updated about any progress.

The seemingly endless litigation involving solicitor Brian O’Donnell and his family returns to various courts. A further bid by the O’Donnells to avoid Bank of Ireland holding possession of his family’s former home at Gorse Hill, Killiney, opened on Tuesday.

Meanwhile, bank receiver Tom Kavanagh is still waiting to get on with his action, claiming some €200,000 lost rent from the four adult O’Donnell children, based on estimated rental income of €10,000 to €15,000 monthly, while they remained in occupation of the property.

The civil action for damages by Bailey’s partner Jules Thomas over her arrest in connection with the murder of Ms Toscan du Plantier also opened on Tuesday. Thomas is opposing the State’s bid for an order halting the action on grounds that it was brought outside the applicable legal time limits. Medical evidence relating to Thomas’s psychiatric state at the relevant times has been exchanged between the parties and the application will be heard during this court term.

Separately in the High Court, the publishers of the Phoenix magazine are facing proceedings for alleged contempt over articles concerning Bailey’s case which were published before and after his action was heard. The case has serious implications for press freedom. The State and Garda Commissioner earlier this year settled other contempt proceedings brought by them against Independent Newspapers over aspects of its coverage of the Bailey proceedings. The Phoenix has appealed the refusal of the trial judge, Mr Justice John Hedigan, of its application to recuse himself from hearing the contempt matter.

Another case of interest concerns bankrupt Priory Hall developer Thomas McFeely, who is opposing an unprecedented application by the trustee administering his bankruptcy to extend it by five years on grounds including alleged failure to disclose all his assets. The case is in the High Court bankruptcy list this month and McFeely’s bankruptcy, which was due to expire on July 30th, has been continued pending further order.

On Monday, Mr Justice Max Barrett delivered his decision on the long-running action over whether the Electricity Supply Board must bear any liability for the 2009 floods in Cork city. He found the ESB liable for 60 per cent of the ¤19 million damage to uildings at University College Cork. He also ruled UCC was 40 per cent liable for failing over years to act on mounting information of flood risk to its properties.

This term’s High Court list also features many cases related to planning decisions and public-procurement contracts. Wind farms around the country appear to be of particular concern.

While there will always be new cases of major importance in every new court term, these cases sometimes eclipse the continuing work dealing with perennial lists of childcare cases highlighting the continuing lack of sufficient places for troubled children; family law disputes; asylum cases; medical negligence cases and cases over home repossessions and bankruptcies. These and other lists expose the multiple faces of human misery consistently before the courts.

RO'CK ‘I’ve never passed an exam in my life. I’m still driving on a provisional’

3 Diarmaid Ferriter: Efforts to avoid ‘public scandal’ created the greatest scandal of all

4 David McWilliams: What a Doc Martens boot can teach us about the wealth gap