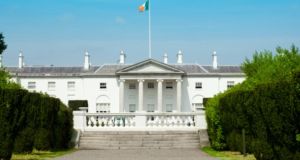 The patronising attitude displayed by politicians and much of the media towards the presidential referendum was clearly not shared by the electorate, who strongly rejected the proposal

Young people deserve far better than the failed referendum on the presidency. Its heavy defeat is no insult to their ability or enthusiasm. But it is a judgment on Dáil Éireann, which thought that a petty and marginal proposal might pass muster with the public.

The enthusiasm of so many emigrants who returned at their own expense to vote for gay marriage was in stark contrast to the lack of enthusiasm with which ministers treated their own second referendum – ostensibly about young people.

The patronising attitude displayed by politicians and much of the media towards the referendum on those aged under 35 was clearly not shared by the electorate. For voters strongly rejected the proposal, and did so contemptuously.

Yet RTÉ reported on Saturday night that there was “scant interest” in the poll, despite 1.9 million citizens voting on it. Scant interest among jaded political correspondents and ageing ministers perhaps?

Voters knew what they were doing.

Heroes of human rights on the world stage this week, we do less well when it comes to domestic political reform or to meeting the needs of younger citizens.

There are only seven deputies under the age of 35 in the Dáil. Like some maiden aunt proud of her nephew on his Confirmation Day, Fine Gael likes to show off Simon Harris TD (aged 28). But one swallow does not make a summer.

Ireland is dominated by elites that are out of touch with the radically changed socio-economic realities of young adults.

So serious is the predicament facing younger people that we are in denial. In an economy where education, health, transport and other public services have been stripped of up to €60 billion for the banks, where working conditions are depressed by an unregulated downward spiral of global competition, the Government tries to engineer a restoration project to return things to the way they were before the crash (at least for some).

But young people live in a complex world very different from that which many over the age of 35 have known. Too many “jobs” are now defined by short-term contracts, low salaries and long hours.

This precariousness make it much more difficult to start a family, or to get a mortgage from banks that play the kind of hardball with young couples that they ought to have played with speculators before the crash.

Global investment companies push up property prices even as the supply of public housing falls far short of providing an alternative to paying high rents for insecure short tenancies.

Expectations of health insurance and pensions once taken for granted are being destroyed, making life even more fraught. Successive Irish governments encourage the privatisation of health care despite evident problems associated with that in the US.

And even for those who can afford health cover, benefits within standard policies have been whittled away and are full of catches. In fact “catches” and trickery are part of a society that seems to prey on vulnerable citizens.

It is a rough scenario and likely to get rougher in the face of international factors such as over-population, environmental unsustainability and a global capitalism that cannibalises the resources of nation states and forces down standards of work and living.

Ireland has so far ridden the wave of global capitalism better than some countries. Providing a sort of tax haven to multinationals that we would decry elsewhere, we attract jobs that will disappear tomorrow if the multinationals get a better deal from some more desperate country.

The extent of the crisis facing young people does not sit easily with the myth of a long-term reversion to the endless cycle of a benign global capitalism some prefer to contemplate.

A striking example of “positive” media last week was RTÉ’s Claire Byrne Live. Ostensibly about the needs of young people, the programme failed to mention the presidential poll or to ask the Government’s representative on it why we had no chance on Friday to vote for some more meaty measures.

The programme gave its political platform to a Fine Gael minister, who shared the panel only with a comedian (no joking). It distracted from the serious argument that this presidential referendum was a lost opportunity to do something better for young people.

Critics can feel like cribbers and moaners, like those who so irritated Bertie Ahern in 2007 that he wondered how they did not commit suicide.

But Friday’s presidential poll suggests that it is not critics who are out of touch with a dismayed Irish public.

1 Seán O’Brien: Anger over my parents’ break-up has never left me
2 Why Waterford is ‘the best Covid county in Ireland’
3 Sinn Féin’s stand on Covid is facing increasing questions from political rivals
4 ‘In 2018 I wrote publicly about my heritage. Soon after, the anti-Semitic messages began’
5 Two hundred Irish retailers for all your online Christmas shopping
Real news has value SUBSCRIBE