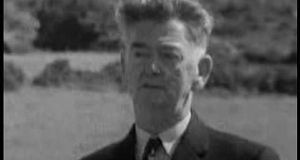 Eunan O’Halpin and Daithí Ó Corráin’s magisterial study of the casualties of the struggle for Irish independence, The Dead of the Irish Revolution, will inevitably prompt reflections, not only about those who died in that struggle, but about those who survived. Many of them went into public life and ended up as political heavyweights in the new Irish state. But not all of them achieved high office, and some of them had career paths that became legendary in quite different ways.

Three of them (and I’m sure there are many more) had subsequent lives and careers that may by now have slipped beneath the radar, but provide interesting footnotes to that period of Irish history now achieving its centenary.

One was Martin Corry, later a Fianna Fáil TD for one of the Cork constituencies, whose IRA record as a ruthless executioner reputedly stood him in good stead in every election between 1927 and 1969. In subsequent years he became a legendary parish-pump politician, not least among younger public representatives and journalists who were unaware of his record as an IRA enforcer in the War of Independence.

He wore both aspects of his reputation lightly, and was not easily discomfited even by the occasional whiff of scandal or improper political activity. But on one occasion, following a change of government, he was briefly discommoded when a letter from him to a previous minister seeking some favour or other was read out in the Dáil by one of his political opponents. It concluded, his critic revealed, with the memorable phase: “Please burn this letter.”

Corry’s father, incidentally, was an RIC man. He shared this genealogical quirk with a few other Irish TDs, including both Noel Browne and Jack McQuillan.

Another former revolutionary ended up appointed to a sinecure in the Department of Industry and Commerce under Seán Lemass during the second World War. However, he had to be warned of the danger to his career if he continued his practice of abusing his influence to procure hard-to-get bottles of whiskey for his friends

Yet another luminary of that period, but one who never entered representative politics, let alone government , was of course Tom Barry, who lived in retirement in Cork, with occasional forays into republicanism as outlined recently in this newspaper’s correspondence columns.

In Cork, of course, everyone knew almost everyone else, and one day my grandfather, JJ Horgan, a Cork solicitor who was described accurately by the late Jack White in an article in this newspaper as “an unrepentant Redmondite”, was informed by his secretary that “a Mr Tom Barry” was in the office and wished to see him, but did not want to disclose the nature of his business.

“JJ”, as he was universally known in Cork, was a constitutionalist avant la lettre. Indeed, during the siege of republican forces in Cork city by the Free State army during the Civil War, he had declined a request to assume responsibility for a revolver that one of the republican leaders, whom he knew personally, wanted to entrust to him.

When Tom Barry came to see him several decades later, “JJ” was now a director of a company which owned three large drapery shops – one in Patrick Street in Cork, called the Munster Arcade, one in Limerick, and a third one in Belfast. He was always proud of being associated with an enterprise which operated on both sides of the Border.

Press reports at the time, however, had indicated that the parent company was now the object of a hostile takeover bid by a British company named Great Universal Stores, which owned a number of large and successful department stores in the UK, and which was controlled by a Jewish family named Wolfson.

Barry was ushered into Horgan’s office and, after some pleasantries, said with some asperity: “I hear ye’re having some trouble with that . . . Wolfson?”

The solicitor carefully acknowledged that this was indeed the case, but added that he hoped that the company would remain in Irish hands.

Barry then produced a large revolver and laid it on the solicitor’s desk between them.

“If you want anything done”, he said, in what I suppose could best be described as a marked manner which left little to the imagination, “you have only to say the word.”

It is probably accurate to record that this distinguished but very pacific legal gentleman was not even momentarily tempted to respond positively to this unexpected initiative, but I never discovered what excuse he gave Barry for declining his unusual offer.