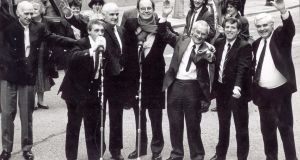 The UK Bar Coucil pleading on behalf of Walter specifically refers to the danger of executing the innocent, exemplified in the capital convictions in the Birmingham Six and Guildford Four cases. Photograph: Joe St Leger/The Irish Times

‘His head was in his hands,” the defence lawyer recalled of the hearing, “and he just had a troubled look on his face.” Anthony Kennedy, the swing vote on the nine-member US Supreme Court, would rule in the case last June with the death penalty majority. But it clearly did not sit easily with him.

Abolitionists who have for years studied every twist and turn, every nuance in the court’s rulings on the issue, trying to find hints of a change in the judicial climate, sense that this at last might be a moment of opportunity.

Kennedy has ruled both ways in cases where limits have been proposed on the scope of the death penalty – age, mental capacity, etc – but has not yet made explicit his view of its overall constitutionality. But, significantly, he has spoken of the need to take into account public and international opinion. And the tide has definitely turned.

Opponents of capital punishment are now pinning hopes on the case of Pennsylvania woman Shonda Walter; the Supreme Court is this week considering whether to hear her case or not. Since Walter does not fit the special categories of defendants that the court has over the years gradually shielded from the death penalty, her appeal is based on the claim that all executions violate the US constitution. An opportunity, lawyers believe, Kennedy willing, for the US to this week break with a practice that has brought its justice system international opprobrium.

International legal groups, including the Bar Council of Ireland and those of Australia, the UK, Canada and South Africa, have filed amicus curiae opinions in support of Walter; the UK pleading specifically refers to the danger of executing the innocent, exemplified in the capital convictions in the Birmingham Six and Guildford Four cases.

Her new lawyers argue that Walter “emerged from an arbitrary process which fails to limit the death penalty to the worst offenders”.

That arbitrariness, the uneven application of the state’s most draconian punishment, as much as the cruelty of the punishment, will be central to the case.

Only 15 per cent of US counties now account for every death sentence handed down since the 1970s, and countless reports show that black or poor defendants such as Walter are far more likely to face capital charges.

Seven states have abandoned the practice since 2004, bringing the total to 19, while since the turn of the century executions and sentences have been declining more or less year on year. In 2015 there were 28 executions and 49 new death sentences, the lowest numbers in decades. Texas, Georgia and Missouri now account for the vast majority of death row cases.

The decline in capital punishment, which steadily reinforces the legal “arbitrariness” argument, mirrors a decline in public support.

Polls now show an even split between support for death and support for life without parole. Support for the death penalty in principle, though still a majority, has declined by a quarter since the 1990s.

The legal battleground has in recent years largely been focused on eroding capital punishment at the edges. This week the Supreme Court ruled against Florida in a case in which judges rather than juries imposed the death penalty, opening up the potential for challenges to many ongoing cases as well as dozens of new appeals.

The courts have barred the execution of several categories of people: minors, the intellectually disabled and those convicted of a crime other than murder.

New DNA techniques have allowed campaigners to show that many on death row are innocent. Several states have abandoned the practice because of the excessive cost of capital trials, while challenges to the use of specific drugs as ineffective and cruel have delayed executions.

Perhaps, however, the central issue can now be faced head on. As the New York Times legal correspondent Adam Liptak puts it: “ They can no longer ignore the clear movement of history.”

1 Coronavirus: A further 123 cases reported in meat processing plants over past week
2 In six months we will be in the grip of a 1980s-style recession
3 Madeleine McCann case: Police identify German prisoner as suspect
4 Luke ‘Ming’ Flanagan bares his bottom half to European Parliament
5 Varadkar offers Independents Jackie Healy-Rae style deal to support coalition
Real news has value SUBSCRIBE