Why you should switch off the Eurovision tonight 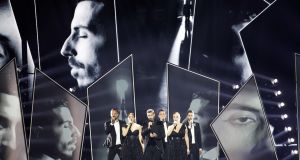 Kobi Marimi of Israel at a dress rehearsal ahead of the final of the 2019 Eurovision song contest in Tel Aviv: entertainment in the context of oppression and illegal occupation. Photograph: Ronen Zvulun

Many have conflated and confused calls for a boycott of the Eurovision as a campaign against the Israeli population or a shunning of Jewish people. It is not. What it is, simply, is a call for recognition of the fact that Palestinian lives matter and that Palestinians are equal in rights and dignity to Israelis.

Calls to boycott the Eurovision have been decried as anti-Israeli and the shunning of an entire people. The boycott – which is a recognised and peaceful form of protest – has been routinely described in warlike terms as an attack, a weapon, and as being unreasonable, violent, aggressive or extremist.

This is the language of propaganda at its best – propaganda that is being supported and well-resourced around the world by the government of Israel which continues to defy international law and human rights standards with impunity.

It is also the language of cover-up and the systemic denial of illegal occupation.

And in this white noise of propaganda the larger context is conveniently ignored. The daily control, brutalisation and distress of Palestinian mothers, fathers and children is denied, excused and whitewashed as the settlement project proceeds apace.

It is hard to comprehend the daily violence, stress and human cost of the occupation on Palestinians. While visiting the Occupied Territories, I have been shocked and saddened to see the injustices that Palestinians live with every day. I have sat with mothers who don’t know where their teenage sons have been taken by Israeli forces. I have watched families scavenge through the wreckage of their homes to try to salvage what they can of their lives and livelihoods after those homes have been demolished. I have joined families at meagre meals outdoors – not because it’s trendy to eat al fresco – but because their communities lay in ruins around them.

Life in Gaza, which has been under an Israeli blockade for the past 12 years, can only be described as unbearable. Unemployment is at 50 per cent. There is little or no electricity. The water is largely undrinkable while people rely on food handouts from the UN and charities. It is almost impossible to enter or leave. It is an open-air prison located about 70km from the glitz of the Eurovision in Tel Aviv.

Israel is also the only country in the world that has a military juvenile court system.

Ironically Israel has ratified the UN Convention on the Rights of the Child but it violates it daily with impunity. In the West Bank, there are two separate legal systems in operation. Palestinians, including all children, live under Israeli military law which fails to ensure basic and fundamental rights. Israeli settlers are subject to the Israeli civilian and criminal legal system. The sole factor in determining which laws apply to a child is her or her nationality and ethnicity.

Children also report that arrest and detention leave long-lasting psychological and psycho-social impacts. Many are afraid to go out after they have been detained.

Annual reports from human rights organisations tell us that more than 270 children and young people will likely be in Israeli prisons this same Eurovision week. In the first few months of 2019 an average of 207 children – some as young as 10 – have been detained monthly. This means that six children will be detained each day on average or 42 by the time the 2019 Eurovision winner is announced.

According to international and Israeli human rights organisations, most Palestinian children detained by Israel in 2018 were threatened with violence, having their homes demolished, imprisonment for life or denial of food. The vast majority do not have a parent or lawyer present when interrogated.

Children also report that arrest and detention leave long-lasting psychological and psycho-social impacts. Many are afraid to go out after they have been detained. Others have spoken about the impact of their arrests on their younger siblings who are fearful of any calls to the house at night. There are also reports of an increase in the number of suicides, particularly in Gaza, and including among children.

Despite this, it would seem, from false claims about the Eurovision boycott, that there is no acceptable way to defend the humanity of Palestinian people, including children, or indeed protest against their oppression.

The issue here is quite simple. As people indigenous to their land, and by virtue of their fundamental human rights, Palestinians are equal in dignity and rights to the people of Israel. The rights which the people of Israel claim for themselves, to their land, their homes, and to live under the rule of law, must also be available to Palestinians. This is the yardstick by which justice should be measured and by which the behaviour of everyone – Israelis, Palestinians and the international community – should be judged.

Eurovision is nothing to sing about, particularly when viewed against the ongoing oppression and illegal occupation. Speaking truth to power still matters, especially at moments of heightened public engagement such as the Eurovision.

Éamonn Meehan is a former executive director of Trócaire and a board member of Sadaka, the Ireland-Palestine Alliance