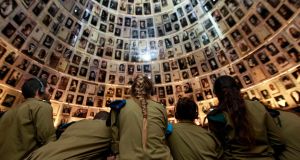 Israeli soldiers stand under pictures of Jews killed in the Holocaust during a visit to the Hall of Names at Yad Vashem’s Holocaust History Museum in Jerusalem. Photograph: Baz Ratner/Reuters

Those interested in learning of how the boycott was historically deployed as a weapon to malign Jewish people should visit Yad Vashem, the vast Holocaust remembrance centre on the slopes of Mount Herzl in Jerusalem. There you will understand the tactic’s cruel power to inflict pain. The memory of being shunned is etched into the Jewish psyche.

As Israel this week hosts the Eurovision song contest, those calling for this cultural event to be shunned for political reasons should consider how their message of exclusion is received by the 75 per cent of Israelis who are Jewish. With anti-Semitism on the rise again, such an indiscriminate boycott has a piercing potential to wound and to give succour to ethnic hate.

It is understandable that many people want to seize this opportunity to ensure that the plight of the stateless Palestinians is not left to fester in the shadows. It is also not necessarily anti-Semitic to protest against the political or military actions of the state of Israel, provided it is not held to standards not imposed on others.

Yet behind the febrile arena of global politics, there are simply people. We all live, love and strive to get on and thrive. How we, as people, choose to communicate our grievances with each other is important. Indiscriminate shunning – for that is what a blunt boycott of an Israeli Eurovision is – has a terrible resonance for Jewish people.

To ignore this fact is to deny most Israelis their history.

Last Tuesday, as the giddy preparations for Eurovision cranked up 40 miles away in Tel Aviv, I went to Yad Vashem. It was a few hours before Yom HaZikaron, an especially sombre time for Israelis anyway, as they remember their fallen soldiers. It is also, clearly, a painful time for Palestinian people, albeit from a different perspective.

Yad Vashem commemorates the Shoah, the murder of six million innocents during the second World War, as well as the persecution of Jews in Europe that made the slaughter possible. The centrepiece is the Holocaust History Museum, a 180-metre long structure that plunges underground, taking visitors on a subterranean, chronological journey through unimaginable suffering. Boycotts were a shameful early enabler of this ocean of death.

The first exhibits are themed “From Equals to Outcasts”. These include evidence of scores of anti-Jewish boycotts, such as Nazi Germany’s 1933 Judenboykott. Jews were dehumanised by the shunning, before their humanity was taken once and for all, as later exhibits showed.

The last section is the Hall of Names, where the identities and humanity of many of those killed is restored. It is a poignant end to the journey. The building then lurches back above the earth, to a terrace with views across the valley below.

I emerged blinking into the sunlight, my emotions trembling but under control. The door swung behind me and another man stepped onto the terrace. I don’t know if he was Jewish or a non-Jew like me. But his face was flashed with horror, his hand clasped tightly over his mouth as if stifling a scream or sob.

We caught each other’s eyes – mine narrowed, his swelled with tears. I thought about placing my hand on his shoulder. But in the end I just walked away. As I did, I swore to myself that I would never support a boycott that even risked giving the mistaken impression of targeting Jewish people. Blunt, ill-defined boycotts of Israel are fraught with such risks.

On a previous trip to Israel, an old man told me that Israelis see themselves as “sabras” – prickly pears that are hard and spiky on the outside, but soft on the inside once you strip away the roughness. I understood this in the context that the horror of the Jewish people’s past defines the Israeli state’s ruthless defence of their present, and their future.

Weeping on the streets

Last Tuesday evening, as an air raid siren sounded to commemorate Yom HaZikaron, I watched Israelis, most of them young people, weeping on the streets and I thought of sabras.

Young people in recent years have changed the world, especially our understanding of how we communicate. Society now understands that it isn’t just what we mean to say that counts, but also how our message is received by those of whom we speak.

No matter how well-intentioned some may intend it to be, what message does an indiscriminate boycott of a cultural event, simply because it is held in Israel, send to the next generation of Jews? These are the young people who will be excitedly tuning into Eurovision as others call for it to be shunned.

No matter what boycott proponents say they mean, that they target the state of Israel instead of Jewish people, the message that will be received by the majority of its citizens is one that will be sadly familiar to them: that they are people to be shunned, to be made stand alone.

If we treat everything to do with Israel as an arena for political battle, what room does that leave for us to communicate fairly with its people?