Fintan O’Toole: Who can beat Trump? Not Joe Biden

Joe Biden was a two-term vice president and spent 36 years as a senator, but his front-runner status in the Democratic primary will be tested by the party’s desire for generational change. Video: New York Times 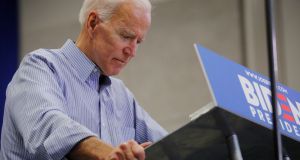 Joe Biden seems to have the quality that more exciting candidates are said to lack: electability. Photograph: Reuters/Brian Snyder

Who can beat Donald Trump? That, for almost everyone outside his own fan base, is the question.

Usually, at this early stage of the US presidential election process, people who are asked what they are looking for in a candidate cite things like character and values. When they are asked about the chances of that candidate being elected, their answers tend to follow their own preferences – if they like you, they think you will win. Not this time.

Something markedly different is showing up in the polls. Beating Trump is now much more important to potential Democratic voters than any other criterion – three times more important than the candidate’s values. They may love you but if they fear you won’t manage to kick Trump out of the White House, it’s sayonara.

Many progressives who think it appalling that good candidates should be ruled out on the basis of race, gender or sexual orientation concede this may be a necessary evil

And this, on the face of it, is why Joe Biden is the current favourite to be the Democratic nominee. If elected, he would be 78 on inauguration day. He has almost 50 years worth of political baggage to lug around behind him on the campaign trail, some of it, like his woeful handling of Anita Hill’s testimony of sexual harassment against Supreme Court nominee Clarence Thomas in 1991, very heavy indeed.

He has a reputation for gaffes and a very poor record as a lead candidate in national elections. But he seems to have the quality that more exciting candidates are said to lack: electability.

What lies behind this assumption is an acceptance of identity politics. Trump won in large part because he animated the resentments of white voters, especially men. Therefore, the logic goes, the Democrats can beat him only if they have a candidate who does not make white men angry just because of who they are – in other words, the candidate to beat Trump must not be black, female or gay or (worse) any two of the above.

Even many progressives who think it appalling that good candidates should be ruled out on the basis of race, gender or sexual orientation concede in private that this time it may be a necessary evil. Trump trumps everything.

It is undoubtedly true that Trump has capitalised on white, male, heterosexual resentment of black and brown people, uppity women and shameless gays. That is, indeed, the essence of his appeal.

But things are much more complicated than that. At least two important qualifications have to be factored into the equation and when this is done, the calculations for who might beat him look rather different. Both of them are essentially about figuring out which voters are, or are not, persuadable.

The first is that Trump’s base is not just white people or even white men in general. It is people who are both white and religious. The combination of race and religion is the key.

The US is becoming increasingly like Northern Ireland: tribal political identities are not “ethnic” or religious – they are formed by the fusion of the two forces. Thus, being a Catholic doesn’t predict much about whether or not you voted for Trump. But put Catholicism beside ethnicity and the results are stark.

Astonishingly, a quarter of whites who oppose inter-racial sex voted for a black president in 2008 and 2012

The point about this is that, as we know very well in Ireland, once this fusion of ethnicity, religion and politics has happened, it is very hard to undo. And therefore it is not worth trying in 2020.

Trump will not be beaten because fervent white Catholics or white evangelicals are converted in big numbers to the Democratic cause. It is a matter of faith – they are true believers and they believe in Trump’s ability to roll back social liberalism, especially in relation to abortion and gay marriage. They are not, in any great numbers, open to persuasion.

Picking a Democratic candidate with some imagined appeal to them is as pointless as thinking that a nice moderate Catholic might get votes from Protestant evangelicals in Northern Ireland.

But that still leaves the second (much smaller but still potentially decisive) group: white voters who are persuadable. These are people who voted for Trump but are not at all sure they approve of him. They gave him a go in 2016, which means they don’t find him radioactive. They are not culturally repelled by his manner and his message. They are susceptible to his appeals to white identity politics. But they might well prioritise other issues in 2020 and vote for a Democrat who can excite them on those issues.

How do we know this? Because it has happened before with a candidate called Barack Obama. One of the easiest things to forget is that in both 2008 and 2012, a lot of white people with very illiberal views voted for Obama.

Twenty eight per cent of white people who agreed in 2011 that racial inequality is “really a matter of some people not trying hard enough. If blacks would only try harder, they could be just as well off as whites” voted in 2012 for Obama. Forty nine per cent of white people who disagreed that “over the past few years, blacks have gotten less than they deserve” voted for Obama.

Astonishingly, a quarter of whites who oppose inter-racial sex voted for a black president in 2008 and 2012.

This is a core group of white people who voted for Obama but then went on to vote for Trump. They make up a highly significant five per cent of voters. They voted for Obama in spite of his race and his liberalism. Why? Because he excited them about other things – hope and change. And Trump did the same thing for them – though keeping the change part while substituting fear for hope.

The question is who can excite the voters who gave the benefits of their grave doubts to two very unusual, indeed unprecedented, candidates: Obama and Trump

But there is strong evidence that these Obama-Trump voters are experiencing buyer’s remorse. No other voting group has shifted away from the president more in the last two years. In 2016, 85 per cent of them expressed a favourable view of Trump. Now, just 66 per cent do.

These voters are white and not college-educated – the classic profile of the Trump supporter. They may be quite reactionary on issues like racial justice. But they have already voted twice for candidates promising radical change – Obama and Trump. And now a lot of them are up for grabs. Given how few real swing voters there are in the tribalised world of US politics, they may make a huge difference.

Thus the real question about electability is not who seems like the safest bet to voters in the middle. It is who can excite the voters who gave the benefits of their grave doubts to two very unusual, indeed unprecedented, candidates: Obama and Trump.

The answer to that question does not look like Joe Biden.