Police work must be open to public scrutiny

Democratic and human rights-compliant policing are key to to transparency 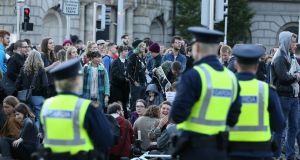 People take part in a sit down protest following the eviction from a house at North Frederick Street, Dublin. Photograph: Brian Lawless/PA

Who knows; who cares?

No garda should be subjected to abuse or intimidation via social media or otherwise. Members of the force also have human rights which must be protected. That is a principle not stated often enough, but a ban on recording on-duty gardaí - which Minister for Justice Charlie Flanagan appeared to support yesterday - is not the answer or a proportionate response.

The lawful objective of protecting national security must be balanced by the right to freedom of expression. One of the UK’s most highly regarded judges, the late Lord Bingham, explained it this way: “Those concerned may very strongly wish that the facts relating to such matters are not made public… Experience however shows, in this country and elsewhere, that publicity is a powerful disinfectant. Where abuses are exposed, they can be remedied… The role of the press in exposing abuses and miscarriages of justice has been a potent and honourable one. But the press cannot expose that of which it is denied knowledge.”

One could say the same about filming on-duty gardaí. In the aftermath of the North Frederick Street incident, rumour and counter-rumour abounded. It was alleged that the incident proved that the gardaí resort to confrontation and force too quickly. In the absence of objective evidence and statistics to prove otherwise, the gardaí were immediately put on the back foot. The Garda Commissioner has since called for a report, which is welcome, particularly if comprehensive and later published.

Part of the problem is the failure of the Garda to put comprehensive information about their use of force into the public domain. In that context, when images such as last week’s surface, it can become the accepted truth that the public can’t trust the organisation. That is untrue and unfair to the vast majority of Garda members who serve to protect the public and uphold fundamental rights.

An Garda Síochána owes it to its own members as much as to the public to set the record straight, by presenting a more complete picture of its policing service backed up by reliable information and data. It has not, historically, demonstrated this culture of openness.

At the same time, it is also essential that independent recording of police operations is facilitated and permitted. This can be significant where there are differing accounts about the use of force, such as during the 2002 Reclaim the Street demonstration or the more recent 2014 Jobstown protests, where video footage later emerged which contradicted the sworn testimony of members of An Garda Síochána.

The framework within which the Garda operate is entirely hidden from the public according to the Irish Campaign for Civil Liberties which last week published a report of which I was the author: A Human Rights-Based Approach to Policing in Ireland.

A transparent police service is not defensive, reactive or overly cautious; it does not 'manage' the media to deliver the police message

The Garda publicly rejected this assertion and referred its public order command policy on its website. Their response made the ICCL’s point for it. The report had pointed out that the public order command policy was “general in nature” with little more than a repetition of the general aim to protect and uphold human rights. The policy does not contain any information that will help the public to understand what the Garda’s strategy or policy is likely to be in any public order operation.

The Council of Europe, the continent’s leading human rights organisation with 47 members including Ireland, has emphasised that “police officers in charge of policing public order operations should be able to show that they have considered and applied relevant human rights principles. The keeping of adequate records is very important in this regard”. In other words, it is not enough to say that a service is human rights compliant; that compliance must be demonstrated with reliable evidence.

Democratic, human rights compliant policing is transparent policing. Transparency is the opening up of police work to public scrutiny by, amongst other things, the publication of operational policy, investigation reports and statistics on the use of police powers. It is not the job of the press, academics, non-governmental organisations or anyone else to find information; it should be made available to the public willingly and systematically.

A transparent police service is not defensive, reactive or overly cautious; it does not “manage” the media to deliver the police message. Instead, it encourages a culture of openness and disseminates information to the public so they may judge for themselves.

I began with the question: “who knows and who cares?” It would seem that few know but many care. That is neither healthy nor truly democratic. Democracies die behind closed doors. With the Commissioner’s acknowledgement that mistakes might have been made last week, together with his call for a report and apparent willingness to engage the public, it seems that the Garda may be opening its doors. We should support their efforts in doing so.

Alyson Kilpatrick is a barrister and was Independent Human Rights Legal Adviser to the Northern Ireland Policing Board between 2009 and 2017. She is the author of of the ICCL report: A Human Rights-Based Approach to Policing in Ireland