That’s All, Volks – Frank McNally on the rise and fall of the Volkswagen Beetle 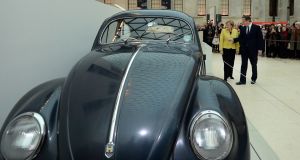 The demise of the Volkswagen Beetle reminds me of something I heard a while back from a man who had grown up in a Midlands dealership for that and other VW cars.

He was talking about the 1960s and 1970s, I think: or maybe the 1950s. But he said it was well known then that Fianna Fáil supporters were more likely to buy Volkswagen, whereas Fine Gaelers leaned towards British makes. He presumed it to have been a lingering effect of de Valera’s economic war, when supporters were urged to “burn everything English except their coal”.

Weighing up this nugget of social history, I remembered that my own father – then a Fianna Fáil county councillor, and the son of a founding member of the party – had once owned a Beetle.

It was before my time: we only knew of its existence from old photographs. When I came along, he had already bucked the stereotype (if that’s what it was) by buying a British classic, the Morris Minor, into which his seven children were sometimes squeezed (although I don’t know how).

After that, he went mad altogether – it must have been the excitement of us joining the EEC – and traded up to a French Renault 6. That was the first car I recall being part of the great Fianna Fáil election machine, in which transport was always vital, especially for getting the rural vote out on polling day.

One of my earliest political memories is the old man being congratulated on re-election by an independent who had run on some radical left-wing platform and attracted only a handful of votes. He shook my father’s hand and told him that, whatever about the rest of that shower, he was a “man of the people”.

But as for his Volkswagen – the “People’s Car” – that was long retired by then. Nor, in any history books or archives, can I find much other evidence of the FF/VW coalition. If anything, this newspaper’s coverage of elections in the 1960s and 1970s suggested the marque had defected to other parties.

In the 1964 general election, for example, the IT reported that Charlie Haughey had been upstaged on a visit to Straffan by a Labour speaker commanding the village crossroads with a loudhailer “mounted on a Volkswagen”.

And in 1977, a businessman called Albert Reynolds was said to be touring Longford in a “Mercedes” while his Fine Gael rival had to make do with a borrowed “neo-vintage” (I don’t know what that means either) VW. Elsewhere in the same campaign, Maeve Binchy described accompanying Labour’s John Horgan, in his “battered Volkswagen”, on a canvass of Dublin South.

Then again, Volkswagen had undergone a global reinvention by that time, to which its most famous car was central. Launched with ominous timing in 1938, and the personal approval of Adolf Hitler, the Beetle’s early years would not qualify as one of the motor industry’s greatest PR triumphs.

After the war, however, its cheapness, reliability, and workaday image made it the face of a new, gentler, humbler Germany. Crucially too, it had a face: the smiling bumper, drooping nose-like bonnet, and above all, those big round headlights, missing only eyelashes.

It was a car with personality, the sort to which people gave names. Unsuited to being draped with bikini-clad models, it was instead bought by large numbers of women. As the 1960s progressed, it also lent itself easily to redecoration by pot-smoking hippies.

It was no surprise when, circa1967, the Beetle went to San Francisco and put flowers in its hair, or at least all over its body-work. The postwar transformation was complete when it landed the lead role in The Love Bug (1968), the first of a Walt Disney series featuring an anthropomorphic car, fitted with feelings and a mischievous sense of humour as standard.

It didn’t get to speak, exactly. But its acting abilities compared well with such contemporary rivals as Skippy the Bush Kangaroo.

If the Beetle really had been a favourite of socially-conservative Fianna Fáilers, its hippy period may have been when they started having second thoughts.

In the meantime, the car’s survival was secured for another 50 years.

It needed a facelift in 1997, when redesigned as the New Beetle. But even then it was unmistakeable. And announcing its retirement this week, effective from next year when it will be 81, Volkswagen did not rule out its return at some point. It would be an electric car then. As such, politically, it may yet end up as a favourite of the Greens.

1 David Trimble: After the big dinner in Oslo, somebody said why don’t we party together?
2 Why are there so many angry dads?
3 Coronavirus: Warning against blame game as 46 more cases are confirmed
4 John Hume, architect of peace process, dies aged 83
5 Maureen Dowd: The US president and the damage done
Real news has value SUBSCRIBE