Both Supreme Court cases had noticeable similarities but were subtly different 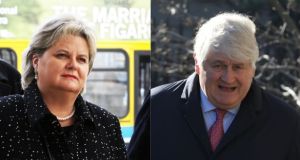 Angela Kerins (left) and Denis O’Brien have both brought cases before the Supreme Court in recent times. Photographs: Collins Courts

It’s a pertinent question to ask why the Oireachtas lost the Angela Kerins case of last week but won Tuesday’s case brought against it by Denis O’Brien.

Why did the Supreme Court, hearing the two cases more or less at the same time, make fish of one and fowl of the other?

The cases had a good deal in common. Each involved the tension between two aspects of the public interest.

On the one hand, the Houses of the Oireachtas, the elected assembly and principal lawmaker in the State, needs to be free of legal restraints.

The court held that the constitutional immunity does, in principle, extend to committees

The Constitution reflects this, stating in unqualified terms, that, “Members of each House . . . shall not, in respect of any utterance . . . be amenable to any court”.

But, as against this, the Constitution also requires respect for an individual’s good name and for “fair procedures” to be followed, if this is being called into question.

This is especially true where the individual involved is not a politician or public servant but a private individual, like Kerins and O’Brien.

So why make a difference between the two cases?

One answer given, by the court in the Kerins case was that, while the constitutional provisions , one of which was quoted above, do indeed confer a strong immunity, this must give way where the breach of individual rights is “egregious”.

I think O’Brien might well say that one could not get much more egregious than a defiance of a court injunction against publication of private bank details.

Another more solid difference is that the disclosure against O’Brien occurred on the floor of the Dáil; whereas Kerins was cross-examined in a committee.

An argument which went begging in the case is that, in light of the prominence which the Constitution gives to the Dáil’s role in policing public expenditure, the Public Accounts Committee (PAC) may enjoy a special constitutional status, over and above other Oireachtas committees.

Now, in the Kerins case, the court was properly respectful about committees which, after all, are the places in which a modern parliament has the best chance of making a real contribution.

The court held that the constitutional immunity does, in principle, extend to committees while, at the same time, suggesting that this was somehow conditional on its keeping within its terms of reference.

As one English barrister remarked: 'One does not talk to hostile witnesses as one would to a fellow guest at a dinner party'

This condition, of course, might seem to run into the criticism that it is not for a court to adjudicate on whether an Oireachtas committee has gone beyond its proper limits.

Ordinarily, this would seem to lead a court into the marsh of interference with the internal proceedings of parliament.

But here there was a factor which enabled the Supreme Court to avoid this trap.

This was that, on this occasion, the PAC had been rather severely ruled out of order, by the authorised Oireachtas body, the Committee on Procedure and Privileges (CPP). In short, the court had simply to bow to the CPP.

This could amount to a special factor allowing future courts to give the Kerins case a fairly narrow scope.

For it is likely that, otherwise, the outcome in this case will lead on to either a docile, confused parliament or to a torrent of litigation.

Many people have commented, correctly, I think, on the ugly, unfair, damaging, way in which at least three of the 13-member PAC treated Kerins.

As to this, judges and lawyers might well contemplate what sometimes happens in courts and this may make them more tolerant of the PAC’s methods.

To any lawyer, the treatment of Kerins was reminiscent of the way in which grown adults speak to each other in courts of law.

George Bernard Shaw characterised this spectacle as two persons paid to call each other liars in the hope that the truth may emerge.

Shaw was thinking of the way barristers speak to each other; but plenty of venom is left over for the witnesses.

As one English barrister remarked: “One does not talk to hostile witnesses as one would to a fellow guest at a dinner party.”

Regretfully, readers like it and the newspaper accounts of both trials and Kerins’s ordeal by PAC somehow recalled the gibe that Puritans disliked bear-baiting not because of the cruelty to the bear, but because of the pleasure it gave to the spectators.

David Gwynn Morgan is emeritus professor of law at UCC