Why don’t you Irish get Donald Trump?

Donald Trump on his arrival at Shannon Airport to visit his golf course in Doonbeg, Co Clare in 2014 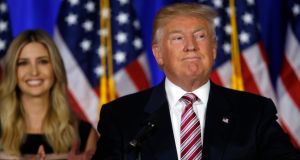 I share Donald Trump’s concerns that sovereignty is not being respected and we have no control anymore over who is coming in and for what purpose, even though it sounds “racist” to superficial ears. 2016 REUTERS/Carlo Allegri

In the midst of all the anti- Trump rancour in Ireland and as an American Republican who lived in Ireland during graduate school and married an Irish person, I am dismayed that I have never once been asked by any Irish person why I am a Republican, only how could I be a Republican.

The inherently negative bias among Irish towards the Republican Party is unfounded and mainstream Irish politicians and Irish media do a disservice to the Irish populace in failing to provide a fuller picture of US politics outside the lens of the liberal, progressive agenda associated with the Democratic Party.

So, as an average US citizen with higher education and a strong appreciation for transatlantic relations, I would like to offer a view of why I and many other fellow US citizens are Republicans, even in 2016.

1 I believe in small government. More government bureaucracy does not make people better-off. Look at the Obamacare website debacle. Look at the Internal Revenue Service. The fact that ordinary working people are at the hands of government when trying to figure out how to register for healthcare benefits or file a tax return, while at the same time receiving no help from the government, is just a boondoggle.

2 I believe in free markets. I believe that low taxation and economic incentives encourage job creation and job mobility people. I do not believe the Democratic view that more regulation, more wealth redistribution and higher taxes help anyone.

4 I believe in sovereignty. Yes, this should resound with Europeans questioning the EU and throwing up temporary borders in the midst of a migration crisis. I share Donald Trump’s concerns that sovereignty is not being respected and we have no control over who is coming in and for what purpose, even though it sounds “racist” to superficial ears.

5 I believe in American hegemony. To those who question the value of American superpower, I ask who else can act as a broker for freedom around the world. Europe is not resourced enough. Freedom is not free and therefore hard power is sometimes needed. Exercising soft diplomacy, or even retreat, is the recipe of the western liberal order and look at what we have: Islamic State, homegrown terrorism in the West, an undaunted and unruly Putin, a deal with Iran that weakens the US, a US ambassador and his staff dead in Benghazi, and what is promising to be a failed negotiation of the Transatlantic Trade and Investment Partnership.

So the next time the words “ignorant” or “dangerous” come to mind when describing Trump or the Republican Party, I hope someone reading this article will realise that these terms are relative. A lot of Americans think the same about the Democratic Party, for valid reason.

Meghan Kelly is an IrishTimes reader