Which Boris Johnson will the new UK prime minister prove to be? 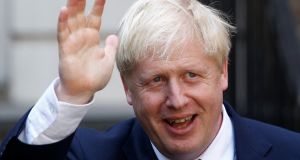 Boris Johnson’s win is the culmination of three years of whispering in the corridors of Westminster about his ambitions. Photograph: Henry Nicholls/Reuters

Conservative Party members make up a fraction of one per cent of the UK electorate, but today they overwhelmingly chose Boris Johnson, the grassroots darling and figurehead of the 2016 Brexit campaign, as Britain’s next prime minister. How he is received by the other more than 99 per cent of the voting public will depend on two key questions.

The first defining question as the former foreign secretary takes over is: will he be able to shepherd the UK out of the EU, bringing the first stage of Brexit to its conclusion as his predecessor failed to do? Can he, by meeting the Brexit deadline of October 31st, treated as an article of faith during the leadership contest, offer the fresh start the Tories yearn for? With a working majority down into low single figures, it will be a challenge to secure the votes for an amended deal. If parliament decides to block a government decision to walk away without a deal, Johnson could be facing an early general election, which, if he loses, would usher in the third prime minister this year.

Johnson’s win on Tuesday by 92,153 votes to 46,656 over his challenger Jeremy Hunt is the culmination of three years of whispering in the corridors of Westminster about his ambitions to take over from Theresa May. She triumphed in a 2016 leadership race in which Johnson’s own campaign imploded; May then fought a disastrous general election the following year in which she lost the Tory party’s slim majority. She then failed to get a Brexit deal negotiated with the EU approved by the House of Commons, confronted by rebels on her own side, including Johnson.

This – and so much else – depends on a second and rather intriguing question: which Johnson will the new prime minister reveal himself to be when he takes over from May on Wednesday afternoon (the outgoing premier will stay in post for one more day in order to appear at a farewell prime minister’s questions)?

The character on show during the leadership election was the “Boris” who also spearheaded the Leave campaign: brashly optimistic when pressed on the details and challenges of Brexit, liable to sudden promises of spending splurges and reversals in Tory policy, and unfazed by facts when his assertions prove unfounded. This is the man who brandished a kipper to (falsely) make a point about EU regulations.

But this carefully-curated persona is not the same man that Conservative MPs and commentators say will reveal himself once in power. The prime ministerial Johnson, they are at pains to reassure, is a moderate Tory of the One Nation tradition, socially liberal and committed to infrastructure investment policies to promote economic growth. This is the Johnson who as Mayor of London secured the support of voters from across the political spectrum and welcomed immigrants from the EU and beyond to the capital. This is the politician who waved a brick at the Tory party faithful during a conference speech in 2014 calling for a big housebuilding programme.

Briefings to this morning’s media promised a “blitz” of domestic policy announcements, to be unveiled immediately so that a Johnson premiership would not be defined solely by Brexit. The rebellious Remain or soft Brexit-minded Tory MPs, meanwhile, warned overnight that promising (or rather, threatening) a no-deal Brexit will alienate moderate voters. Analysis of the European elections bears out this point.

But while some of his cheerleaders are preparing the ground for brick-wielding Johnson to defeat kipper-wielding Boris, the warning from Tory rebels – who now include powerful figures such as Philip Hammond, the outgoing chancellor – signals unavoidable trouble: Johnson cannot easily pacify the Commons and the country with a One Nation agenda while he is on course to honour his no-deal promises to the Tory grassroots, and, crucially, to the Brexit hardliner MPs who made May’s life so difficult.

Which set of expectations will Johnson choose to disappoint and which to meet? Rory Stewart, the outgoing international development secretary who said some time ago that he would not serve in a Johnson cabinet, summed up this puzzle – and the uncertainty facing the UK at the start of the new premiership. Asked to evaluate the danger posed by the incoming prime minister, he offered that Johnson was not “some kind of 1930s figure”, in other words, not an extremist. But, Stewart reflected: “The danger is the lack of detail, the lack of anything particular. It’s the sort of vagueness, the abstraction that worries me . . . I literally don’t know what happens on the 31st of October . . . I can’t plot his path.”

As Johnson himself admitted to the Tory party after acknowledging his victory in a speech just after midday: “There may even be people here who wonder quite what they have done.” – Copyright The Financial Times Limited 2019